Side B: Sophisticated Jewelry 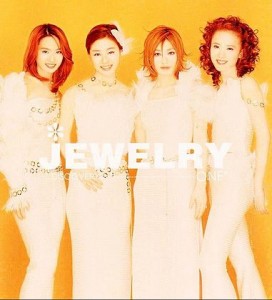 This edition of Seoulbeats’ Side B will be delving a little deeper into the music of  the sophisticated ladies of K-pop, Jewelry. Having debuted in 2001, Jewelry is credited with being the longest lasting girl group in K-pop. Under management company Star Empire Entertainment, the group debuted with the album Discovery and members Park Jung-ah, Lee Ji-hyun, Jung Yoo-jin and Jun Eun-mi. Due to the lackluster response to their debut, two members Jung Yoo-jin and Jun Eun-mi were replaced by Cho Min-ah and everyone’s favorite K-pop witch, Seo In-young.  For their second album, Again, the group went against the trend and released an album full of soulful R&B  ballads with power vocals which made them stand out at a time saturated with sexy dance tracks.  They gained popularity and achieved some success with the title track “Again,” and the K-pop love ballad “Tonight.”  Jewelry tried the ‘cute and innocent’ route with their third album, Beloved.  They promoted the songs “I Really Like You” and “Be My Love” and again found moderate success, but the members weren’t feeling the cutesy concept and instead went the sexy route–and thank goodness they did. 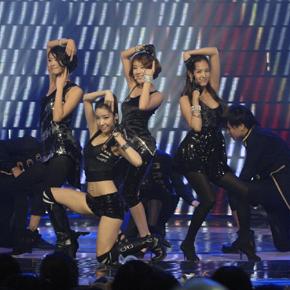 Their fourth album Superstar, was what finally put Jewelry on the K-pop map.  They hit it big with the title track “Superstar” written by Shinhwa‘s Minwoo and their next promoted song “Passion” also did well. With their sexy new image with Seo In-young front and center it seemed as though Jewelry was well on their way to the top of the charts.  But then Lee Ji-hyun and Cho Min-ah both left leaving Star Empire scrambling to fill their positions.  What came about was Jewelry’s most successful line up with the addition of rapper Baby J and Eunjung.  In February of 2008, the new Jewelry released their 5th album Kitchi Island and with the title track “One More Time,” a remake of Italian singer/songwriter In-Grid‘s song, they finally hit #1 and stayed there for 7 weeks winning all the music shows with the hit song and its signature “ET dance.”  Jewelry would also go on to win a Daesang in 2008 for Highest Digital Sales.

After reaching the top of K-pop idoldom, what would come next for the group after various solo and sub-unit work was their sixth album Sophisticated released in August of 2009. The promoted songs from the album were: “Rally,”which was released as a single and was used on the reality show Superstar K; “Strong Girl” which was also released as a single to promote the forthcoming album; and the title track “Variety.” Sophisticated just happens to be one of my fave albums, its  dance tracks are perfect for vegging out to, as part of your work out playlist, or as part of your homework jams playlist–to help keep you up when you rather be doing anything else than studying.

The Jewelry I know began with the song “One More Time.”  My love for all things We Got Married got me interested in all the virtual players and led me to Jewelry through Seo In-young.  In-young’s not my fave person in K-pop, but I totally respect her because she’s real. I also liked her distinctive voice, which was much better served singing with Jewelry than screeching at Crown J.  So this, led me to Jewelry’s Sophisticated album which became an instant fave of mine because all the songs on the album were tight–no filler here. The intro on the album, “Bounce,” would have been an awesome song–if only it was two minutes longer.  Why do K-pop artists always relegate a potentially awesome song to a minute intro?

All the members of Jewelry have great voices–Park Jung-ah has this rich and sultry tone and I love Baby J’s raspy voice–even though I can almost never understand what’s she saying. The next track on the album was “Butterfly” and I really dug the electronic distortion of the vocals and the the electric beats.

Love the funky beats of “Oops” and the chorus, although it sounds a bit similar to another famous “oops” song… It’s a playful and sassy track.

Although again I can barely understand what Baby J is rapping in the beginning, “Sweet Boy” is  an upbeat groove with a skillful arrangement and an addictive chorus

But perhaps my fave song on the album is Jewelry’s rock anthem “Be a Rocker.” love the synthesized beats and the rocking chorus. For some reason I also like the way they say “I am rock, rock shoop-erah star.” And well, who doesn’t wanna be a rock star?

Sophisticated was an excellent offering from Jewelry. My only criticism of the album–ALL the songs were dance tracks. It would have been a more well rounded album if they had mixed up the song selection more.

Unfortunately, soon after the promotions for Sophisticated, Park Jung-ah and Seo-In-young announced that they were leaving the band to pursue solo activites and with that, the last original member of Jewelry left. There was talk of retiring the Jewelry name, but Star Empire decided to call the departure a ‘graduation system’ instead and then looked for two new members to continue the Jewelry tradition. In the end, they selected Superstar K finalist Semi and Yewon as it’s new members. In January of 2011, the new Jewelry released the song “Back It Up” and the first thing that came to mind seeing the MV was that they were pulling a Secret à la “Shy Boy.” The promotions for “Back It Up”garnered lukewarm reactions and was no way near in popularity as their previous hits with Park Jung-ah and Seo In-young. The group then released the song “Pass” in May 2011 which was forgettable with many ‘passing’ on the song. It was announced that Jewelry will make a comeback in July 2012.

The thing that I loved about Jewelry was that they were sophisticated women full of great vocals and brazen attitudes.  I’m hoping this new Jewelry finds it way back to its roots instead of joining the K-pop idol cookie cutter mold.  It would be a shame if the authenticity of Jewelry left with departure of Park Jung-ah and Seo In-young and if that was going to be the case–they should have just changed the name of the group.

Hope you enjoyed exploring the music of Jewelry a bit more and don’t forget to check out our next edition of Seoulbeats’ Side B in two weeks– see y’all on the flip side.