It's A Dal Shabet Day Afternoon With "Mr. Bang Bang"

Oh, Dal Shabet. This six-member girl group is the brainchild of E-Tribe: mastermind behind SNSD‘s monster hit “Gee” and the equally monstrous “U Go Girl” for 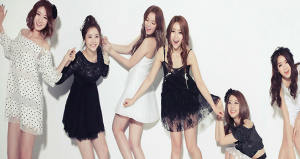 Lee Hyori. Dal Shabet found some popularity during their run as rookies, even nabbing the rookie award for last year’s Golden Disk awards. Although there wasn’t much competition, Dal Shabet created an aggressively cute concept for themselves, reminiscent of Girls’ Generation, and came out with well-received singles, making the group one of the survivors of the great rookie explosion that occurred in 2011, alongside B1A4, Boyfriend, APink, and Block B, in terms of relevance. Earlier this year, they released a comeback single, “Hit U”, and now have returned with their follow-up track “Mr. Bang Bang” and its accompanying MV. Despite the sexual innuendo that this title of this track (could) allude to, the lyrics of the song are a change for your typical girl group song , using violence as an analogy for a declaration of a love, and are little unnerving, especially when listening to the girls plead for the boys to shoot them in the heart. But, odd analogies aside, the song is pretty catchy and doesn’t overdose on infantile singing, with screeching and whining. However, the MV will leave you scratching your head as much as the lyrics. 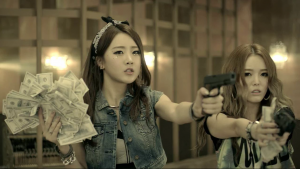 The MV begins with a shot of a wanted poster and opens to a scene at a bank, where all seems to be going on as usual, until, suddenly, a troupe of girls enter the bank, brandishing their weapons and demanding the tellers to give them all of their money. Despite seeming like they couldn’t care less that their identities weren’t concealed, the girls manage, with the help of their guns, to rob the bank. But once they’ve stolen the money, instead of making their getaway, they decide to flaunt their spoils in the middle of the bank, and even giving some money to who are supposed to be their hostages, easily giving time for someone to call 119. 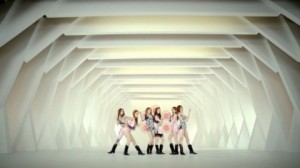 The police eventually arrive, and instead of surrendering, the girls decide to make it rain with the stolen money, and the police, instead of arresting them, decide to dance around alongside the former hostages and the bank staff and steal all the money as well. As they start having a merry old time stealing their own money and the money of others as well, more police arrive by the sound of the sirens, and they all slowly make their exit, ending the MV. On an intellectual level, this MV is as nonsensical as one could get, and not even in an amusing way. It’s understandable that the MV didn’t need to be that thought-provoking, with a song that sounded so catchy and up-beat, but the MV should at least have some sort of reason behind the nonsense, not nonsense for the sake of nonsense, or being cute. It would have been more interesting if the MV had focused on the incompetency of the girls as bank robbers, à la Dog Day Afternoon, and extended the MV with a chase scene full of gags and hijinks, instead of the cops deciding to join the girls, and the other hostages, in stealing the money. That would have brought some coherency, and made for a fun MV. The main gripe about this MV is the ending and the odd turn of events with the cops and hostages joining the fun of stealing the money, and the lack of motivation that girls had for robbing the bank in the first place.

Aesthetically, this MV is pretty, with the light and dark contrast between the bright pastels of the dance scenes and earthy tones of the bank scenes, and the girls’ outfits are cute, but the emphasis on the girls’ butts during their butt shake dance is very unsettling. Their make-up looks very familiar; it seems TaeTiSeo have sparked a new trend with undereye sparkles. Although the MV is boring and childish, performance-wise, the girls are confident and their vocal talent is pretty strong, and they don’t seem too off-kilter after the loss of their leader, Viki. Hopefully E-Tribe will stop playing it safe and give the girls some material that shows off their talent and strays away from their recurring cutesy concept, in addition to interesting MVs. Guess we’ll have to wait until they all come of age.