There are three boy bands that I especially love: Exo (-M), Infinite, and B.A.P. Of those three, there is one that continually suffers at the hands of their stylists. No, not Exo – B.A.P., the best, absolute, perfect band of my heart. Time and time again I have asked myself what B.A.P. has done to deserve the horrible styling they’re typically wearing. Paint-splattered jumpsuits, Sonic the Hedgehog hairstyles, bleached blond hair, pink tuxedos, graffiti-printed jackets – who deserves these things, I ask you? Certainly not my babies. In K-pop, there are many groups that suffer at the hands of poor styling, but few quite as much as B.A.P. So here I am, as a B.A.P. fan, writing this article, among others, to complain about B.A.P.’s stage outfits in hope that TS Entertainment will see it and hire me reflect. 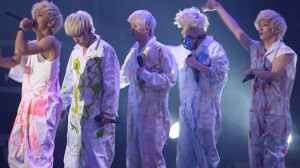 B.A.P.’s formula is very simple: jackets, jumpsuits, paint splatters, camouflage, neon colors, tuxedos, and a mixture of all those things. Separately, those elements can be fine. I’m not a huge fan of of them (excluding the tuxedos) but that’s simply a matter of taste, although I would argue that jumpsuits, camouflage, neon colors and paint splatters are all tacky in their own right. This formula has carried through all their promotions, to the point that it’s become their staple. If this isn’t bad enough, their clothing is really, really ugly as well. Look at their clothes in the two pictures above — they look like janitors that just got done painting a wall. The green color of the outfits on the right is unattractive, especially when mixed with bright yellow and vomit-green. 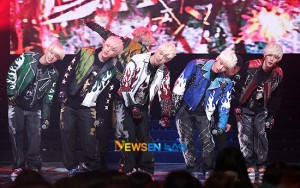 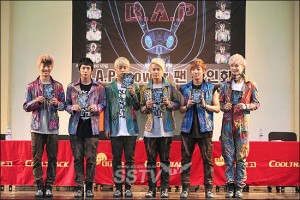 The point of B.A.P.’s ugly, graffiti-printed clothing is to embody a strongly masculine, rebellious image, and maybe that’s why their fashion is so bad. True rebels don’t give a damn about fashion and clearly neither does B.A.P. If they did, they wouldn’t be wearing vomit-printed jackets with brown pants. They wouldn’t wear clothing that clashed nor would they pair paint-splattered black pants with flame-printed heavy-duty jackets. Sarcasm aside, the concept does work well with B.A.P.’s tough, anti-establishment persona. They sing and rap about fighting back and wear clothing familiar to punks and rebels. The problem is that they wear the rebellious elements all at once and in doing so look horrible. 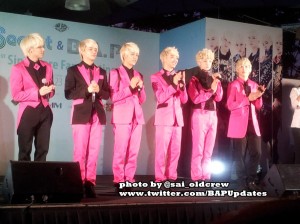 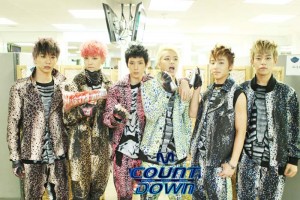 Not always does B.A.P. look rebellious, sometimes they look pimptastic, like during their “Secret Love” era when they consistently wore suits. Satiny black and white suits would’ve worked fine, but this is B.A.P. Obnoxiously bright, cheesy tuxedos are the way to go. Except for the few times that B.A.P. wore something simple and classy, they looked like cheesy used-car salesmen–but I’d rather the boys wear pink suits forever than see them in those dreadful leopard-printed get-ups they wore. It burns my eyes to just look at them. It’s unfortunate that B.A.P. doesn’t even get nicely fitting clothing. Not only does their clothing look bad, it’s also unflattering, often too baggy and awkwardly fitted. The boys have typical idol-figures, so there’s nothing to hide–and yet they swim in their clothing. 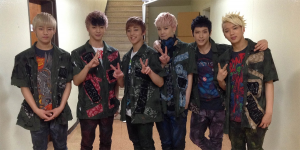 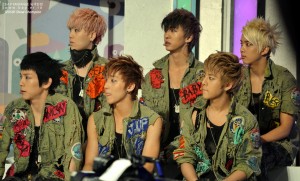 Aside from clothing, there’s also the matter of hair. We all remember how confusing it was when B.A.P. first debuted, everyone sporting brightly bleached blond hair. It took most people, myself included, quite awhile to tell them apart. B.A.P. later explained that the bleached hair was intentionally done to give B.A.P. a uniform look, which made sense. But for their comeback, all the members came back with different hairstyles. A few were fine — Daehyun continues to look gorgeous with his light brown hair and Jongup killed noonas everywhere with his new brown hair as well. Zelo came back with strawberry ice cream-pink hair, which looked surprisingly good on him, although the shade strangely varies and looks washed out sometimes. He needs a new hair color before all his hair falls out from over-dyeing. Beautiful, wonderful Himchan came back with short black hair similar to something you’d see in an anime. Because it’s Himchan, it naturally looks good on him, but I miss his longer hair already. The short hair, with the ruler-straight bangs, only serves to make his face even more pointed-looking. Yongguk’s hair strongly reminds me of raccoons and I really, really wish he’d go back to the bright red hair he had back during his “I Remember” days. Then lastly, Youngjae, who remained blond, had half his head shaved and the other half spiked. Unspiked, the hairstyle is fine enough, but B.A.P.’s coordi-noonas normally spike it so he resembles a Dragon Ball Z character. Oh, how I miss the days when Youngjae had fluffy, long hair… 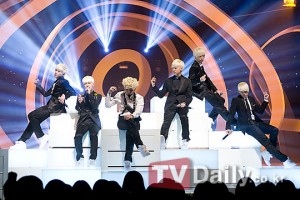 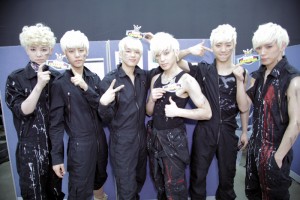 To be fair to B.A.P., not everything they wear is atrocious. There have been a few times, about one or two, that they’ve worn clothing that’s vaguely attractive. For example, the black tuxedos they wore for one or two “Secret Love” performances. I still have problems with fit and also Zelo’s suspenders — they make him look like a giant child — but the boys still looked gorgeous and suave. And there was one time — one — when I didn’t entirely mind them wearing jumpsuits. The picture on the right was from when they wore the solid black jumpsuits from their “Warrior” music video. Although Zelo and Himchan unfortunately have what looks like vomit running down their bodies, the black clothing was better fitted on the boys. They looked sexy, especially Jongup with his “Cheetos” on full display.

These are my angst-ridden thoughts on B.A.P.’s fashion. What do you think of it?