2NE1 x Stylenoir: A Match Made In Heaven?

According to its homepage, British internet magazine Stylenoir is “the world’s largest dark style magazine.” While I’m no expert I’ll take their word for it, as the magazine covers everything from film, fashion and an entire section called “Gender” featuring transsexual and cross-dressing models. If you like your clothing free from affordable prices and safe choices, or if you love the darker, fetishized aesthetics of fashion, Stylenoir might not be a bad place to begin. Its muses include director Christopher Nolan, model Andrej Pejic and now 2NE1.

Earlier this week, Stylenoir founder and Editor James Selene Joseph wrote a piece called “K-Pop superstars 2NE1 to come to London” – a title that made me fall over myself (tricky when sitting down, but let no one tell you it can’t be done) in my haste to click to the article. It turns out that the awesome foursome has been the magazine’s latest obsession due to:

“Their passion for creativity, outrageous fashion and punk mentality” 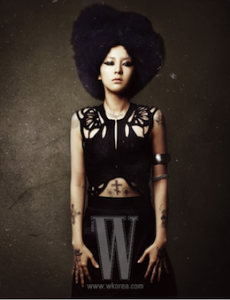 Fair enough, it’s easy to see why such a magazine would love the likes of 2NE1’s “Ugly” outfits, not to mention their links with the likes of Jeremy Scott and Nicola Formichetti. Despite being a loyal fangirl I have to admit perhaps the girls have been a little overhyped – can they really be called “one of the biggest artists on the globe?” In K-pop without a doubt, even in Asia they are quickly reaching superstardom. But while we can point out plenty of instances in which they are recognised and loved elsewhere, when you put it in the context of other artists, including ones featured on the website, 2NE1 have barely made a dent in the Western music scene. Can we verify the statement that “the amount of endorsements, awards and Gold records they have is simply unprecedented?” While enthusiasm from a Western and influential source is heartening, no mention of other famous K-pop groups , such as 2NE1’s equally if not more successful brothers Big Bang, suggests a lack of research.

However, I’m pleased to see that Stylenoir’s obsession looks to be more than a passing fad. Straight after this article was published came a breakdown of 2NE1’s W Magazine editorial, following great interest from Asian readers from Korea, the Philippines and Japan. The magazine has truly taken the girls to their collective heart, calling them true pioneers of “our mission statement ‘Champion Creativity and Pioneer Individuality.’” Conveniently, the photoshoot is appropriately dark and alternative with CL bedecked in crucifix tattoos and Minzy cradling the head of a leopard – jaguar?—skin. Whether the magazine will give the girls exposure if they do their next photoshoot in pigtails and pastels remains to be seen.

This, teamed with the Big Bang article in a Topman magazine, strengthens the argument that YG have a better chance in the West than the likes of Girls Generation or the Wonder Girls. Cute isn’t cutting it, and 2NE1’s devil-may-care edge is fuelling their Western success; no doubt their appearance at the Spiderman premiere has helped exposure. Perhaps 2NE1’s fashion, so often a talked about feature of theirs, will be their weapon; it’s not like we don’t embrace wacky and outlandish costumes from our female artists. As long as they have the performance, talent and charisma to back it up – say what you will about 2NE1, but they certainly know how to own their clothes. Except everything they are wearing in that New Evolution World Tour video — that unicorn top that CL is wearing, not to mention Dara’s white streak, are things that should only exist in the darkest recesses of the mind of a child who has spent too long in a Disney store.

For those of you who are still wondering if the 2NE1 in Britain rumour is true, it’s yet to be officially confirmed, but chances are high they will be stopping in London. Fingers crossed I’ll see you there!