This past weekend saw a Hallyu takeover of Los Angeles.

The annual Korean Music Festival brought together fans of Korean music both old and new: youngsters were introduced to some of music’s legends and the older folks got a live taste of the K-pop phenomenon. Jessie and I attended the event and were blown away not just by the musical guests, but also the sheer amount of people who came out to support the event. 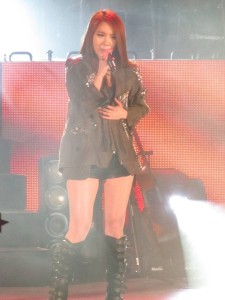 If there’s one thing I learned after attending this year’s Korean Music Festival, it’s that there is a huge gap between the young and older generations, both in regards to the musical presentation and the fans themselves. And if there’s an even more important lesson I learned, it’s to not get in the way of ajhummas. Because they will push you and the rest of the crowd out of the way to get where they need to go. Those women mean business. It was my first time at the event, so experiencing the sheer amount of people (close to 18,000 of them) packed into one arena was extremely overwhelming.

By a convoluted stroke of luck, I ended up backstage before the show started and passed by the artists’ dressing rooms starstruck. I spotted the tiny frame of Brown Eyed Girl’s Son Ga-in, happened by an intimidating Kim Tae-woo, and gawked when his g.o.d. brother Son Ho-young paced back and forth as he prepared to host the show with Narsha. The big people looked even bigger, the small people even smaller, and the beautiful people even more beautiful.

While most people (including myself) had attended the show to watch Brown Eyed Girls and MBLAQ perform (the latter had the loudest cheers by far), the night belonged to the older and lesser-known acts. BEG and MBLAQ surely delivered with their popular songs and high-energy dance performances, but for most of the previous acts, the singing was the performance. The vocal rage of most, if not all, of these artists was tremendous! Being so engulfed in the K-pop genre, which is for the most part propelled by high-energy production and dance routines, I almost forgot that amazing vocal range is also entertaining. Take Kim Kyung-ho, a heavy metal performer who was by far my favorite vocal act of the night.

I didn’t even know these kinds of voices existed, much less that I’d hear them at a Korean music festival! All in all, I loved BEG and MBLAQ’s performances despite their partial lip-synching, but the acts that I’d never heard of stole the night for me.

The Korean Music Festival is an excellent way to be exposed to Korean music outside K-pop that you may not be familiar with. Not only do they have older generation artists, but they have different genres of more current artists represented as well, be it ballad singers or hip-hop groups. The mix of age groups within the audience is always cool to see because there are literally all generations present from older folks all the way down to babies, which is not something you normally see at music festivals. While the cheers may be louder for the K-pop groups, and little kids sitting in front of me may have been playing games on their cell phones during g.o.d.’s performance, generally every act is given a decent amount of support from the crowd and they put on an enjoyable show.

Since MBLAQ and Brown Eyed Girls had performed at K-pop Masters in Las Vegas not that long ago, the other artists I was most interested in seeing were Lena Park, Im Tae-kyung and of course g.o.d. When Kim Tae-woo came out to perform the Korean National Anthem, I may or may not have had a mini-spazz moment, which set the mood for a great evening of Korean music in my favorite concert venue. When Lena Park sang “Vincent,” I couldn’t help but feel like that moment, nestled in the Hollywood Hills with a nice breeze was just perfect.

Unfortunately, Im Tae-kyung wasn’t able to make it to the show, but I ended up being pleasantly surprised by Arirang, Love & Peace and Kim Kyung-ho. When Kim Kyung-ho came out and sang a low-key song, I thought he was just another ballad singer. So when he followed that up with two screaming, head-banging performances I was blown away, as were many others around me. 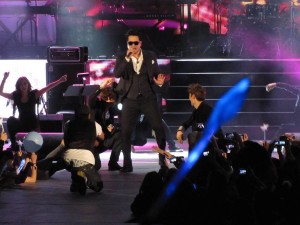 One of the last additions to the line-up was the reunion of g.o.d.’s members, which had me super excited since Kim Tae-woo is my favorite voice in Korean music. I was very glad that both him and Son Ho-young were able to perform solo songs as well, although I was pretty disappointed that Son Ho-young didn’t sing either “I Know” or his recent single “Pretty But Hateful,” both of which I was hoping to see. All is forgiven though, because it was really an awesome opportunity to see g.o.d. on stage together after so long, especially considering Leader Park Joon-hyung had not been mentioned prior to the show. I know original member Yoon Kye-sang was missing, but the four men on stage had been carrying out g.o.d. promotions without him for a number of years anyways. To hear “Lies” live is a moment in my K-pop history I’ll never forget!