While idols can be charismatic on stage, performance isn’t the only necessity for any idol group. K-pop runs on the devotion of fans, much of which is created through appearances on variety shows. Such appearances allow audiences to learn more about their favorite idols and encounter a more human side to them, one that isn’t usually seen in a music performance. They can see which members can think quickly on the spot and which are athletically gifted. They can learn which members are talented in speech and which ones are awkward in talking capacities. In a sense, idols become closer to their fans; as this relationship deepens through increased knowledge of the personalities of members, fans, in turn, can feel a personal connection with the groups that leads to continuous support for that group.

If there was ever a group that’s about variety, it’s Shinhwa. Personally, I heard Shinhwa’s songs, liked some of them, but didn’t really like the group strongly until I saw their interviews and variety appearances, beginning with the ridiculous interview below.

While I felt horrible for the interviewer, the then fresh-faced, gag-woman Kim Na-young, I was more amused by the antics of these men nine years ago, as a group that had been together for five years. Such behavior in an interview today would be harshly criticized, as groups must at least be seen as respectful to others in these situations. Though part of their behavior could most likely be attributed to the interviewer’s skill: this was Kim Na-young’s first interview. She was most likely unsure how to handle a situation with such popular idols.

When Shinhwa made their comeback as a whole earlier this year, I was worried. As a older group, it was debated whether or not their older fans would be able to even compare to the hoards of fangirls that supported the younger groups. It was also in contention whether Shinhwa could make a comeback with more contemporary music that still kept their style but also was relevant to the newer generations. But these fears seemed unfounded after the actual comeback was made: “Venus” managed to incorporate the more popular electronic sounds with Shinhwa’s distinct style and performance to make a song that would not have been made by any other group. The song even managed to clinch a win on Mnet‘s M! Countdown, even though the group had previously stated that winning wasn’t their goal this time around. It was instead to demonstrate their presence in the music industry and show that they meant to stick around. 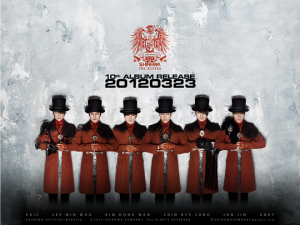 But aside from their album, The Return, what excited me about Shinhwa’s comeback were their interviews and appearances on variety shows such as Golden Fishery: Radio Star and Win Win. While their current interviews are considerably less rowdy than before, they are equally, if not more, entertaining. This is a group that spares no member some form of humiliation. Everyone is up for any story; the only matter is who gets to say a story first. They regularly make fun of each other and throw insults, showing their easy camaraderie. The members are quick to laugh and understand that it’s for jokes, not meant to actually harm one another. They have mastered the dichotomy between being the mature and charismatic performers and the dorky and open entertainers.

Both of these aspects come together to make the image of each Shinhwa member and allows them to have each side in the appropriate moment. Shinhwa has their quirky members, their shy members, and the members that have impeccable timing with their wit. They’ve admitted that some members are better than others at variety, but it’s that difference that makes their work together as a team even more heartwarming and entertaining.

Perhaps the epitome of their variety show skills comes through with Shinhwa Broadcast, their very own show on jTBC. Thus far, ten episodes have been aired, all of pure hilarity and enjoyment to anyone that watches. Shinhwa chose jTBC over the more established local channels because they offered first and proposed a show that fit into their paradigm. As opposed to following the systems and regulations of the big three — MBC, KBS, and SBS — Shinhwa can instead focus on creating a variety show that lets them do as they wish, of course under a set of rules, but ones that are less lax than those of the larger companies. While this may have created some grudges against Shinhwa, no one can say it did them for the worse as the show has hit a mark over 1% and stayed there with the latest two episodes aired. About 1% is considered popular for cable shows, as opposed to ratings higher than 15-20% in the local channels. And rumor has it that the show is up for 30 episodes, more if ratings continue to stay promising. 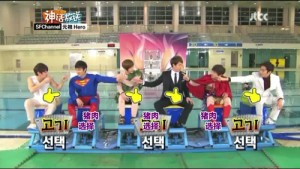 Shinhwa Broadcast is definitely a different type of variety show. It doesn’t have one cohesive theme overall, such as the idea of learning from older, more-experienced entertainers in Super Junior‘s Foresight or the viewer-run 2PM Show, both of which are previous variety shows that revolved around idol groups. Instead, the show’s goal seems to have fun while showing the characteristics of all Shinhwa members. There have been superheroes, strange athletics, Zombie Andy, documentaries, Minwoo‘s sunglasses in the shower, children, Eric‘s dog, Gomdori, and older game shows. While guests are slowly showing up, such as SHINee on a future episode of the show, the main focus remains the Shinhwa members, as was the intent from the beginning.

During the show, the members are clearly comfortable with one another and have no qualms about saying what they think, which is important in any variety show. The concepts they employ are also not strange to them; they work with the producers to put into effect whichever concepts that they want to show next, making each show not just something thought of by a producing team, but a mix of Shinhwa’s ideas with an experienced team to create a possible show. But of course, to maintain the surprises of a variety show, Shinhwa can’t plan everything. So while the concept is put into effect, Shinhwa must at least remain out of the loop for that portion.

I strongly encourage everyone to watch this show, if you haven’t already. I didn’t want to give away too much earlier because the show is something to be experienced. If you enjoy watching witty grown men undergo ridiculous challenges that are guaranteed to make you enjoy the hour you put into watching the show, then definitely take a look at Shinhwa Broadcast.

If you’re interested in watching the show, below is the first part of the first episode with English subtitles.

If you’ve already seen some of this show, or have any other opinions on Shinhwa or Shinhwa Broadcast, let us know below in the comments!