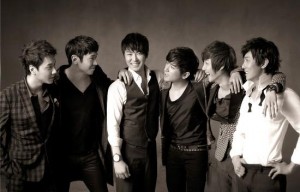 When Shinhwa debuted in 1998, I was happily playing in dirt as a pre-schooler and blissfully unaware of their legendary existence; fast forward 14 years later and here I am in a puddle of fangirl goo. After four years of hiatus where the men went off to perform their duties in the military, Shinhwa returns with an upbeat electro dance song, “Venus.” It’s a good song, the chorus is upbeat and enhanced to the max, but you can still hear the melody. My only qualm is with the dubstep, I wished that drop was a lot harder, but it blended well in the end nonetheless. However, as good as this song is, every time I hear it I feel like it would be a song played at the Homecoming dance of a rich, mainly Caucasion high school (personal experience guys) in the suburbs along with Taio Cruz‘s “Dynamite” and Cascada‘s “Everytime We Touch.” Personally when I think of Shinhwa, American Suburbia is not the image that comes to mind.

Venus is a song about a man (Shinhwa) finding their ‘Venus’ and heralding her with praises. Venus, just as a brush up, is the Roman goddess of love and beauty. Being the nerd I am, I would much rather be compared to the Goddess Athena cause she was a boss… but I digress. Now on to the awesome that is Shinhwa.

Shinhwa went with gray, black, and white hues giving the music video a very dark feel. It clashed with the upbeat feel of the song, but just based on the video and the shots alone, I thought it was done fabulously. The shots of the individual members facing various obstacles were taken well and effectively, using some pretty nifty CGI effects. The one scene where Venus is expelled into the air in slow motion with the other members in various poses around her was executed nicely, as was the one with her nest exploding and the debris flying out in slow motion. The CGI effects in this MV were brilliantly done and it didn’t look tacky or unnatural. Bravo, so 5 out of 5. 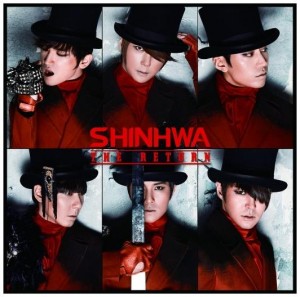 The dance is toned down; the movements are fairly fluid without too much emphasis on precision or power. It goes with the staccato beats of the song, but it isn’t like the dances we see today in K-pop, thoughts roam to Shinee and Infinite. Yes, they are over 30, but I have seen plenty of 30 year olds with some sick dance moves, so that excuse is out. Though Shinhwa are legends in K-pop their dancing isn’t awe inspiring with intricate choreography that makes the dancer in me green with envy. It’s basic and simple but nothing too mind-blasting. However, I will have to commend these men for doing something that is rare in the world of Korean boy bands:

Interaction with members of the opposite sex on stage in a sexy, confident manner.

Most K-pop groups just generally don’t, especially in their lead singles. After my initial “Hot damn…work it, Shinhwa” reaction to the choreo at 1:00, my thoughts ran along the lines of “MOGEF is going to get their panties in a bunch over this, I can’t wait.”

Shinhwa executed the choreography with class and confidence earning them a 4 out of 5.

This music video exuded mysterious and sexy like none other. The men in the video are on a search, not for Venus–oh no they already found her– but rather they are on a search for her heart. The running through tunnels, power plants, and rooftops in dramatic slow motion was evidence of that sentiment. The scenes of the individual members facing various obstacles such as smoke, spears, and sparks represented the obstacles they had to face in order to find her love.

Though the song itself had no deeper meaning than that of a simple love song, I will have to give the band mad props for the little subliminal messages that occurred throughout the MV. There were brief flashes of letters too quick to make out because Shinhwa does a good job of distracting us with their hotness. Well played. 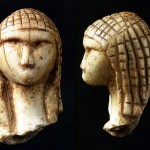 They say curiosity killed the cat, but I’m not a cat so I spent a good ten minutes slowing the music video down and trying to decipher what these letters mean. What I found out was that during the times that letters would run by like at :38 or :46, the letters were spelling out the English word that Shinhwa sang at that precise moment…in reverse. I felt like Nicholas Cage at that very moment of discovery. Not only do they have letters but also image of ancient artifacts and statues depicting Venus or an equivalent, one such image was that of the Woman of Willendrof. The Venus of Brassempouy also made several appearances too. And the cherry on top of this subliminal sundae? Around the end of the music video they flashed “Chang Jo Forever.” Awww. You guys are so cute.

Over all Shinhwa made an excellent comeback, the entirety of the Return album was beautiful and I loved the songs on it and you could see that hard work was put in for the production. The music video in my opinion was well done as was the song and I have been throughly enjoying their comeback thus far. Shinhwa gets 4.67 out of 5 for “Venus” and it’s a score well earned.

In the words of Barney Stinson, Shinhwa you truly are legen….wait for it….dary.