She'z Trying to Have It "My Way" 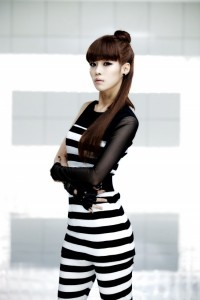 It’s been a good couple of months for girl group fans – Spica, Hello Venus and now She’z of Line Entertainment. She’z consists of Lee Jin-ah, Kim Se-yeon, Kim Ji-young and Lee Tae-yeon, all of whom have received education from leading voice schools. Rumour has it their entertainment skills are so multi-faceted the quartet is being scouted as additional members of The Avengers. But did they live up to the hype?

Line Entertainment gets its fame for emcees and comedians, such as Ji Suk-jin and Yoon Hyung-bin; She’z is the company’s first foray into the K-pop industry. On the one hand this might put the girls at a disadvantage in terms of how they are packaged musically, but then again they might have some solid variety show skills. Besides, there have been some pretty bad offerings from companies focused solely on music.  I guess we’ll find out about their MC skills soon, as leader Jin-ah and member Tae-yeon are confirmed as MCs for an upcoming show Miracle on 7th Street about fanclubs. Their pre-debut PR was pretty low-key, but now that they have emerged She’z clearly aren’t wasting a moment.

The song is called “My Way” and is a radio-friendly pop piece that falls somewhere between a power ballad to independent women and a bubbly aegyo song. The girl’s main selling point has been their strong vocals and while they aren’t all Aliees and Hyorins yet, their singing doesn’t disappoint. It’s impressive, considering most girl groups, that they don’t have a weak member they fob off with some cutesy rapping and dub them as the “personality” or the “face”. “My Way” live is also impressive vocally; either they can actually sing live or they are very skilled lipsyncers. It’s easy to be a cynic in Kpop but it looks like for these girls it’s the former. However there is still the MV to consider… 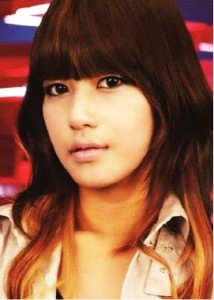 It’s easy to understand the dilemma of any debut, while each group needs something they can be recognised by, pigeonholing them into a concept the fans don’t warm to can be a disaster. So She’z have been kept deliberately neutral, they haven’t stylised as “bad girls”, “sexy”, “cute”, “retro” or any of the common categories girl groups fall under. This is to allow the focus to be on their actual skills, while the MV provides a fun and fitting backdrop where the girls can showcase a variety of different but not radical looks. But all this achieves is a feeling that the MV is disjointed and sometimes plain confusing. The individual rooms for instance, are they reflective of each member’s personality? Because if so, it leaves me none the wiser except Se-yeon quite likes gymnastics and doesn’t care about wallpaper while Ji-young enjoys both cooking and privacy. The dance sequences were boring, although I’m intrigued to know what the red plastic…Christmas tree? Yeah, what that is doing; opinions in the comments please. The best scene is when we are helpfully provided with their names and they have a break from dancing to pose. The posing is tedious but the names are helpful.

I feel as if I have been quite mean to She’z; unfortunately, it’s about to get worse as I start talking about their outfits. Now there is nothing worse than having a group you like unfavourably compared to other groups, but it’s got to be said: their monochrome stripy uniforms look a whole lot like miss A’s “Bad Girl Good Girl” getups, but uglier. Not to mention jumpsuits have been owned by 4Minute since “HuH” – it doesn’t help that Tae-yeon looks like the result of Hyuna’s “HuH” phase and Goo Hara having some kind of lovechild. Also, every idol and their mother has worn that Vintage Hollywood “Statue of Liberty” stud head band, most recently Ren of Nu’est.

Apart from that, She’z’s clothes are quirky without behind too awful, and their hair and make-up isn’t anything to write home about, the glitter under the eyes is really pretty. Similarly the camerawork does a good job of getting both close-ups and wideshots of the girls, giving each one a fair amount of screen time. It’s a cleanly lit, cleanly shot MV that was totally going to get 2.5 until they added that pointless fake snow/glitter effect at the end. 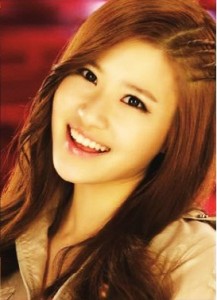 There is an unspoken rule in Kpop that if the all-around vocals are good enough, you don’t have to dance. For instance SM the Ballad and 2AM don’t do all that much moving around. Considering the way they have been marketed She’z might have gotten away with that strategy, but with a dance vibe that strong it’s not going to happen. Their dancing is fine, and they have proved they can sing and dance live which is commendable. They are sassy and sexy (you saw that arse-slap right?) while keeping a sense of fun. It’s a pity then that the main dance for the chorus lets the girls down. Aeroplane wings aren’t sassy or sexy, but granted that they are a lot of fun. Perhaps something a little less juvenile next time?

Usually this would be the Emotional/Intellectual Impact section, but as far as I can tell the MV didn’t really have any. Then I would have to award it something like 0.5 and that would be unfair and inaccurate. “My Way” isn’t badly made, there are some serious style issues that need to be addressed, but while it doesn’t add to the song apart from an introduction to the girls it doesn’t really detract from the song either. My advice is watch them live and be impressed by their vocals, judge them on that, not this MV; fun enough, but they have a lot of potential that could so easily be lost if they aren’t marketed right. Here’s hoping Line Entertainment aren’t just going to use them as guinea-pigs for further Kpop endeavours – these girls deserve more.