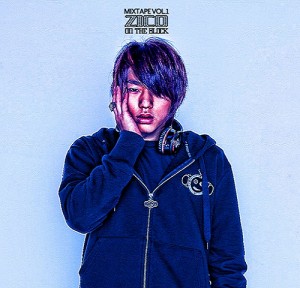 Block B exploded onto the scene in 2011 with their stronger style that was unlike most groups at that time. They didn’t have the cuter, pretty-boy look that Boyfriend and B1A4 had, and they professed to be about their music above all factors. Under Cho PD in Brand New Stardom, the group became known for their crazy antics, especially in MTV‘s Match Up, and the talents of their rappers, in particular Park Kyung and their leader, Zico. Both are particularly talented, having done much work prior to their official debut under other names: Kyung as Hol-ke and Zico as Scribble/Graffiti. It is because of this experience that even though Zico is the second-youngest member of Block B, he’s the leader. While both have noteworthy accomplishments both separately and together, the focus here will be on Zico. My interest in Zico’s pre-debut work initially started when I learned that he had gifted a fan with a pre-debut mixtape at MTV’s Match Up Fanmeet Showcase consisting of seven never-released tracks featuring other underground artists, including Kyung.

Zico, real name Woo Ji-ho, promoted in the underground hip-hop scene in Japan under the name Scribble for three years. He worked with Japanese crews Dope Squad and Undisputed before he returned to Korea. His eventual stage name, Zico, comes from the first part of his given first name, Ji-, and an affectionate suffix given by his Japanese fans, -co. In 2009, he released his debut single with Kyung, who was then Hol-ke, under the duo name Harmonics. The single was called “The Letter” (which can be found later in this article).

Cho PD discovered Scribble and Hol-ke through their single and offered them an opportunity to train and deubt under his label, Brand New Stardom. Part of their exercises to prepare for debut involved creating their own mixtapes by themselves–composing, writing, producing–in order to develop their skills and to build their experience. After two years of dance preparation, performance training, and being mentored by the likes of Skull, Verbal Jint, and Rhymer, Block B debuted.

Before we get to the music, I want to warn you that there is a little bit of profanity present in the songs. It’s primarily not used offensively, but to emphasize the meaning of what is being said. First up from Zico’s pre-debut songs is his debut single with Kyung, which features Elin: “The Letter.”

This is my way of adding Kyung in here, especially since I think he’s often overshadowed by Zico. The song is rather melodic, showing that hip-hop doesn’t have always have that hard edge and strong beat to it. The magical twinkles at the beginning aren’t necessarily the best, but it does allow for the song to enter a dream-like world that suits the lyrics, which speak of memories and longing. There’s an underlying melancholic tone that keeps the song from being entirely happy. That tone in combination with the tones the artists use drive the song in the direction it needs to go: towards a reminiscing of the past tinged with regret of what has happened. The lyrics are particularly honest in a refreshing way. I don’t like using the term “refreshing,” but it was pleasant to see that thought progression through the raps. The play between the parts of the rappers and the singer is also well-made. Kyung is the first one to rap in the song, maintaining a quiet flow with his thinner tone. Zico raps later and is a bit gruffer, with a stronger beat evident in his words. Both styles fit well together, so it makes sense that they tend to work together. I’d liked if there was more of their rapping in the song, as each raps for about forty seconds, and Elin sings the rest of the song. Don’t get me wrong–Elin has a beautiful voice, and it brings the song a melodious sound. But since it was their debut single, it would be have nice for the both of them to have been more prominent.

Next is “I’m Still Fly” off of ZICO on the Block, Zico’s 2010 mixtape. It’s a cover of Drake‘s song with the same title, but the verses are Zico’s own. The chorus, however, is taken directly from Drake’s song.

I chose this one because Zico has actually performed this song live, and the lyrics of the verses impressed me. Honestly, when I first heard the beginning of this song, I thought it would fit incredibly well with popular American music. After reading the lyrics, I was pleasantly surprised by the eloquence present in the English translation. I can only surmise that if it’s this way in English, that it’s similarly well-said in Korean, though, as I’m not Korean and don’t understand the language, I can’t tell you for sure. This song has a harder edge that “The Letter” doesn’t, but it’s clear when the subject matter is noticed. It’s fitting for someone working hard to produce music that they truly feel, rather than what he expects fans to want. It’s a reflection of how he’s been working, and it’s put in a way that, in my opinion, clearly beats the lyrics in Drake’s original song. The rapping here is much closer to what can be heard from Zico in Block B today. It’s confident and full of passion.

This last song is also off of ZICO on the Block. The title is “Dead President,” a play on the figures that appear on money. That title in itself attracted me to the song.

The song has a lazy beat, but the lyrics are far from that. There’s a clear and passionate message full of frustration and criticism of the structure of society and the dependence on money that fuels most actions. It’s wonderful to see serious consideration of what is happening in a society, especially at such a young age. And to see that put into a rhythmic manner and performed in a fitting way is more than wonderful. The song starts off in a trance to drop off into a lazy and smooth background track, ironically bringing to mind a luxurious feel from the beginning saxophone addition to the strings in the background track. The background music repeats itself over and over with little variation, making it clear that the emphasis are the lyrics. The chorus is said in such a languid way that easily makes it a hook that you’ll find yourself repeating, even if you can’t pronounce the other Korean sounds properly. The song ends abruptly, but suits the anger and questions behind the song.

I would have liked to have added here a song from Zico’s time in Japan, but I was unfortunately unable to find any to share. Most of Zico’s pre-debut songs have been released and can be found online. I know that at least for the mixtape he released at the MTV Match Up Showcase, he encouraged sharing of the songs. As far as I know, it’s the same for most others. I encourage you to look into Block B’s songs if you haven’t already, and Zico’s other pre-debut songs and covers. Check the sources below for a link to many of Zico, Kyung, and Mino‘s work pre-debut. (Side-note: Mino trained with the members of Block B, but was cut out before the group was finalized. He’s now a member of the ballad group, BoM, and goes by the name Ta-goon.) I look forward to more of Zico’s music in the future and also that of Block B, although I recognize that as an idol group, there are more restrictions on what is possible and can be presented to stay a group. But as long as Block B has the greater range of freedom allowed to them by Cho PD, Block B will most likely grow and continue to be a group to watch.

Are you impressed by Zico’s work? Let us know by leaving a comment!