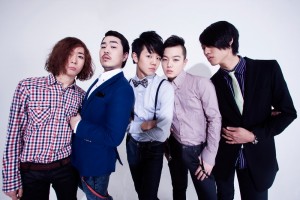 If you are a fan of The Koxx as I am, you were probably pretty excited when they announced through Twitter that they were preparing a new album. If not, here’s a few reasons why you should be.

The Koxx define themselves as an “electronic garage rock band” and is composed of guitarist and singer Lee Hyeon-song, synthesizer and keyboardist Shaun, bassist Park Sun-bin, drummer Shin Sa-ron and guitarist Lee Soo-ryun.

The Koxx started as an amateur band when the members were still at university, and later became more serious until they finally released their first EP Enter in June 2010. Their debut single, “Trouble Maker,” offers a perfect presentation of the guys: strong guitar riffs, electronic base and a MV featuring the guys getting drunk. The song is pretty much self-explanatory and a concept manifesto:

Officially, I shout to the lord

And don’t judge the book by its cover–the MV might be tacky, maybe even really tacky, but “Trouble Maker” is a strong track and is a sign of what was to come.

The album was considered a big success in the Korean indie scene, and a year later they announced the release of a full-length album, Access OK. Their second album keeps the essence of The Koxx, but showed their growth musically with a more refined sound. The guitar is not so loud, but more content and well-defined, and the electric base has a bit more of a presence. The single, “12:00,”  is one of the best songs in the album. Even the MV looks like an upgraded classier version of “Trouble Maker.”

The album also offers another side of the band that I personally adore. “The Words” is a low-tempo song with minimal instrumentation that somehow manages to be beautiful despite being painfully long and repetitive. The lyrics work just as good, if you look past Hyeon-song’s cringe-worthy Engrish. Personal favorite.

After the release of their first album, they started a festivals tour, performing in the most prestigious music festivals in Korea including the Jisan Valley Rock Festival. They also performed in Thailand and China, and were invited to the Nano-Mugen Festival in Japan, which later lead to a short tour through the country.

The Koxx came back to Korea to release the single Oriental Girl in November 2011. “Oriental Girl” was already included in the Access OK album, but the new single included a remix version as well as a very Koxx-esque cover of A-ha‘s “Take on me.” “Oriental Girl” follows the line of their previous singles, but compared with “12:00” relies more on the guitars than on the synthesizer and is more reminiscent of “Trouble Maker”.

Oriental Girl was also released in Japan and soon after the band  held their first solo concert, Success OK, in early December. At the end of 2011, they won the “Discovery of the Year Award” at the GAON Chart K-Pop Awards 2012 and were also included in MTV IGGY’s “Best Debut Albums of the Year” list.

During 2012, The Koxx have been participating in a series of festivals in South Korea. They also recently released a new song, the lovely “Home,” for the SAVe tHE AiR Green Concert which was included in volume 2 of the festival’s album. They have also been preparing a new album, which hopefully will be released soon. 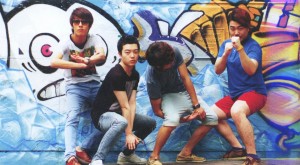 The Koxx are the new promise of Korean indie rock–if you haven’t heard of them by themselves, you have probably heard their work in some form: they featured in DJ Clazzi and Miryo‘s solo works and wrote a song for 4minute‘s last album. Singer Hyeon-song is also the guitarist in Kim Ok Bin‘s project band OK PUNK–what a multi-talented guy.

Take good note, because The Koxx are here to stay, and they are not exactly hidden in the Seoul underground scene. They explained their appearance in KBS‘s reality show Top Band 2 by saying:

[…] we were angry at the fact that non-idol groups were never considered as part of the mainstream music scene. We hope [Top Band 2] will provide the same opportunity that are given to bands in foreign markets; to become stars through their own unique style of music.