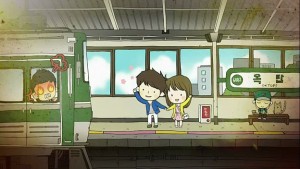 And we’re back with another 5 Things to love about K-pop and a special belated “Happy Mothers’ Day” to all the moms out there.  The last week in K-pop we had a “Beautiful Night” with Ulala Session and Park Han-byul, everyone seems to want to be a “Bad Boy” as Mighty Mouth makes another comeback featuring Soya,  A Pink wants to be heard with “Hush,” PSY and BtoB held special events for fathers on Parents’ Day, Block B is getting back into “Action,” Kim Jong-min‘s heart goes “Pit-a-Pat,” IU sings about “Every End of the Day,” INFINITE released “Only Tears” in anticipation of their comeback, Hello Venus said “hello” to K-pop idoldom, Big Bang urges you to “Never Stop Dreaming,” 2NE1 wants you to make some “Thumb Noise” with Intel Korea, JYJ‘s Junsu doesn’t like love for the Rooftop Prince‘s OST and released his solo album and its title track “Tarantallegra.”  With only four episodes left, The Rooftop Prince‘s story has hit it’s peak and  I’ve just begun watching Queen Inhyun’s Man–soo good, it’s a must see.  If you’re not up to date on your K-pop, turn back now because spoilers are ahead.  These are the 5 Things that happened in K-pop last week that I think were a little more special than the rest.

5. Teen Top getting some Honey

The songs of JYP were being featured on the latest episode of Immortal Song 2. While Lyn did a great version of miss A‘s “Good Girl Bad Girl,” 4Men‘s Shin Yong-jae did a beautiful version of 2AM‘s”This Song,” and Ali did a sexy “I Have a Girlfriend” it was Niel, C.A.P., and Chang-jo of Teen Top that impressed me with their performance of “Honey.”

SNSD‘s Hyoyeon and her partner Kim Hyung-suk performed the jive to “Love Potion No. 9” on the last episode of Dancing with the Stars Korea, Season 2. I think they did a pretty good job although maybe Hyoyeon’s footwork wasn’t the cleanest, but the jive is one of the hardest dances–according to what knowledge I’ve gained through watching the US version of Dancing with the Stars.  And seriously, Hyoyeon is the cutest thing– always so bubbly and personable.  Their score of 21 was far from bad and was actually the second highest of the night, the judges on Korea’s Dancing with the Stars are not afraid of handing out the 5s and a 4 here and there.

In part 2 of SHINee‘s visit to the variety show Idol Weekly hosted by Jung Hyung-don and rapper Defconn, Minho got felt up by Jung Hyung-don because of his two adam apples and the boys challenge the MCs to a bouncing ball race.  It wasn’t anything spectacular, but I thought it was funny and that it showcased the boys personalities:  Onew got off to a strong yet slightly dirty start, Taemin gets played around with because he really is too pretty for his own good, Jonghyun is a straight shooter and gets down to business, Minho disappoints because his competitiveness made him take on Hyung-don and Defconn instead of just bouncing his way along which was just a waste of time–other than the glimpse of his hot pink underwear and pec cleavage, and Key… plays by his own rules.

2.  The competition is fierce on Top Band Season 2

It was the second episode of Korea’s Top band Season 2, where judges Kim Kyung-ho, Yoo Young-suk, Shin Dae-chul, and Kim Do-gyun had the job of picking through the bands to get their finalists.  It’s an awesome show that highlights some of the great talent out there in the Korean music industry other than your every day K-pop idols.  Here is one of the most awesome rounds where all three bands were solid making the choice a difficult one for the judges.

When it comes to ruining all your K-drama warm and fuzzies. Fans of The King 2 Hearts went from the highs of the Unified Korean team barely beating the US and then going on to place 4th overall in the WOC and Lee Jae-shin finding her courage again and confessing to Eun Shi-kyung to Lee Jae-ha finding out about Secretary Eun‘s betrayal and the horrors of the Queen Mother and Kim Hang-ah being kidnapped by rotten cookies, Eun Shi-kyung‘s name for Kim Bong-gu/John Mayer on his phone.  Bong-gu tells Jae-ha to abdicate or else and mom is being threatened to be tortured by the equally psycho rotten cookies sidekick, Bon Bon.  The writer’s of The King 2 Hearts are great at keeping the story line moving while also sending fans on an emotional rollercoaster.  I’m hoping they’re writing in a huge glass of milk… better to drown rotten cookies with.  Here’s a great clip from episode 16 when the Queen Mother overcomes her fears and gives Bong-gu what he deserves after trying to get her to sympathize with his actions.