Bringing K-pop Down Under 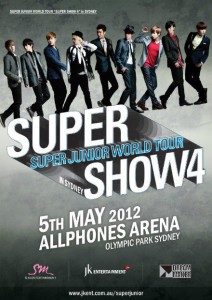 Fans Australia-wide were ecstatic when it was announced that Super Junior would be bringing their current tour Super Show 4 (SS4) to Sydney on the 5th of May. After months of speculation, screenshots of seating plans and advertisement posters floating around in cyberspace, and suspicious nonconfirmations from organisers JK Entertainment, the official statement confirming the event was received with an outburst of some trademark fangirling (not to mention some relief at it not being a hoax).

But alas, it wasn’t meant to be. A week after ticket sales were opened, JK Entertainment was forced to pull the plug after one of the main organisers for the concert was taken ill, leaving many sorely disappointed people in their wake. Australian K-pop fans, and not just the ELFs and Exo fans (Exo-M had been announced as guest performers), were looking forward to SS4 Sydney, as it would be the first time an Australian city had hosted a full-length standalone concert for a K-pop group. The unspoken consensus was that if this went well, then more K-pop acts could be encouraged to make the trek down under, and fans would possibly be able to see their favourite groups conduct full-length concerts on the same continent as themselves. The cancellation of the concert therefore, gave the feeling of pushing back these hopes of Australian fans.

K-pop’s profile is rising rapidly in Australia (as discussed in our previous roundtable), and with live concerts seen as being the pinnacle of the K-pop experience — seeing your group perform an entire repertoire, and being able to witness it live — it’s only natural that fans want K-pop to come to their country, a place closer to them. It’s not always easily done though; while not necessarily unique to Australia, there are issues that make holding concerts for what in Australia is a niche industry that much more difficult.

The biggest challenge, perhaps, is Australia’s demographics. The national population figure is currently about 100,000 people or so shy of hitting 23 million, less than half of Korea’s population which is almost at 49 million. And while there are no official figures available, it’s safe to say that the K-pop fan contingency is going to be but a small fraction of that <23 million figure. The fanbase in Australia may be comparable with that of other non-core market nations, and sizeable enough for live K-pop concerts to be a feasible option, but another factor stands in the way.

Australia is the sixth largest country in the world by surface area, which — together with its population figure — makes it a country with a low population density figure. A lot of the population is concentrated in coastal capital cities of each state and territory (excluding Canberra), and likewise the Australian K-pop fan numbers are split between the states and territories. It would take on average an hour to travel from one capital city to the next closest one by air, and you’d have to add an extra hour to that time if you were traveling to or from Perth. Considering that Sydney is the city of choice for K-pop concerts (as it historically has the largest Korean community in Australia), a lot of fans would have to travel interstate in order to see their idols in person, and have done so for previous concerts like the K-pop Fest in Sydney last year.

But it would take more effort to pull in the same kind of crowd numbers that could compare to those for concerts held in more populous areas in other countries, and with solo concerts, the fanbase for an individual artist or group will be even smaller, further fracturing the number of potential attendees. This issue of population density would also affect the willingness of companies to send their artists down to Australia as well — although Sydney is closer to Seoul than Los Angeles or Paris, these latter cities are able to offer a greater number of concert attendees (from the city itself and from surrounding locations), and would thus be more lucrative and profitable options.

The above are unavoidable circumstances that are just part of the nature of Australia. Yet, despite these, concerts such as the aforementioned K-pop Fest have been conducted successfully, and a fairly small organisation like JK Entertainment is to be commended for organising these events for Australian fans. It is indeed unfortunate that a landmark event like SS4 Sydney fell through, and I do wish the director involved with SS4 planning a speedy recovery. The agency is sure to bounce back though, and organise more events for the future. I, for one, am greatly looking forward to them, but as an Australian K-pop fan who doesn’t live in Sydney and wants to support her favourite idols, there are some suggestions I would make for future events, mainly to do with timing.

Firstly, the actual time of concerts. The biggest example is the K-pop Fest, which was held on the 12th of November, 2011. It was almost summertime, and the atmosphere and weather were conducive to concert-going, but for one thing — the date fell smack bang in the middle of the end-of-year exam periods in various states. I’m not privy to the schedules of K-pop artists, and it may be that that date was the only time that the all the twelve groups who performed at the K-pop Fest were available at the same time, but considering that the majority of K-pop fans are high school and university students, holding a concert during exam time is definitely not the wisest thing to do. Taking things like school and university holidays — when interstate fans have more time available to travel to and attend concerts in Sydney — into account, or at least avoiding crucial time periods like exam times, would be beneficial in raising attendance numbers. 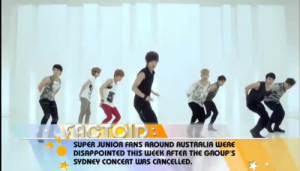 The timing of the SS4 Sydney concert has also been an issue amongst fans. It seems very likely that JK Entertainment organised the Sydney concert after SS4 Jakarta was confirmed: bringing a K-pop group from Seoul to Sydney might be arduous, but getting them to make a slight detour to Australia from neighbouring Indonesia is more doable. And do they did, but the resulting campaign ended up feeling somewhat rushed — for example, concert tickets went on sale on Good Friday, a public holiday during which ticketing offices were closed, meaning people paying with cash had to wait to purchase tickets and thus potentially miss out on the seats they wanted. There were also complaints about advertising (or lack thereof), and both the announcement and cancellation of the concert were leaked to the public or announced by third parties before JK Entertainment could get in an official statement.

Organising events as big as these is no easy task, and JK Entertainment isn’t the biggest agency around; that there is someone there to organise K-pop concerts and events in Australia is only a good thing for fans. When JK Entertainment, or any other agency for that matter, decide to bring a K-pop act to Australia in the future, I hope they’ll take these issues into account to create an even better concert experience.

Do you have any suggestions for improving K-pop concerts and their organisation?