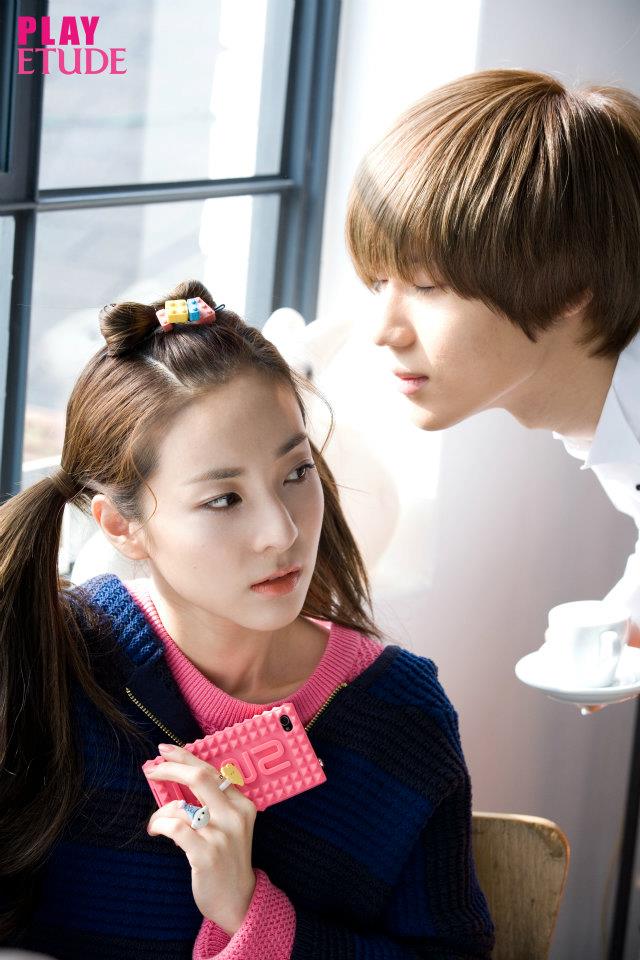 When I first heard of this Etude Kiss Note CF featuring SHINee and 2NE1’s Sandara Park I wasn’t really interested. I am not exactly a Shawol nor do I follow 2NE1 religiously enough to care about this CF, but while scrolling through tumblr I happened across this totally not creepy picture of Taemin sniffing Dara. I was slightly disturbed but at the same time, perversely intrigued.

So far they have released a teaser and three out of the four parts to the CF, and it’s kind of odd. The premise, from what I gather, is that Dara is given a Kiss Note and all she has to do is apply the lipstick, write the name of the person who she wants to kiss her in that lipstick, and voila that person will without his or her consent kiss her. I’m getting flashback’s to Death Note. I’m expecting L–maybe Infinite’s L– to suddenly appear from a corner, crouching  and sucking on a lollipop with a manic look in his eye.

The first part features dino baby Jonghyun. The video starts out with Minho leaning into kiss Dara in slow motion. He isn’t Flaming Charisma for nothing — we all know that it isn’t his rapping, singing, or dancing that brings all the noonas out. We then find Dara sprawled in the middle of a street after tripping over what we see is this huge box containing the Kiss Note and an array of lipstick, and flash forward to middle of class where Dara is giggling over this Kiss Note. Jonghyun is the professor writing some stuff on the board looking like the stereotypical hot professor, plaid and all. Dara is skeptical of course, because Kiss Notes don’t exist in reality but this isn’t reality, this is a Korean commercial film, and with that in mind Professor Jonghyun abruptly stops teaching and walks up to Dara. And then kisses her on the forehead. At that precise moment millions of Shawols collapsed all around the world. Part 2 features hot shot basketball player Key. I personally laughed the hardest at this one. We have Dara sitting on a bench in an empty gym contemplating this magical Kiss Note, and then cue in our second hero. Key swaggers in with his homeboys, slow mo and a fog machine because that’s how all basketball stars walk in. Obviously, Key is an expert basketball player using the decades old ruffling-the-hair stretch before he shoots some free throws. But! He is stopped by the magical force that is the Kiss Note. Dropping the ball he runs, with a possessed look in his eyes, towards Dara and lands a kiss on her cheek. We now have the former jailbait of SHINee, Taemin. This was the second funniest mainly because Taemin ends up kissing a window rather than a living, breathing girl. In this one Dara contemplates the reason to her luck, and whether it was the work of the devil or an angel. My vote is for the commercial film industry, but sure. So when Dara sees the cute waiter who won Best Smile of the Month, of course he’s going down in the Kiss Note. If I were her, I’d choose the employee who won Best Kisser but hey, to each her own. So, Taemin walks robotronically towards Dara, kissing her lightly on the cheek. That’s when Minho calls our heroine, thus effectively cockblocking Taemin. But don’t worry, maknae’s got his window to keep him and his lips company. Which leaves us at the fourth part which features the charisma flamer, Minho. The video starts out with Dara on top of a gargantuan slide, writing and erasing and rewriting Minho’s name. She is in conflict over the fact that she doesn’t want to take his free will away and force him to kiss her via the magical powers that be. Of course while she’s throwing a mini tantrum the lipstick falls out of her hand to the deep abyss below.

But never fear, for Minho the Charisma is here. He yanks Dara back and slowly leans in to kiss her. Their lips meet, the sun sets, pretty music plays in the background. This would have been kind of cute if not for the fact that Minho is incredibly awkward and that kiss was odd. Also, I know that both you and Dara have fans (and Thunder) who might or might not go into a jealous rage over a lip lock but can we please try to make it more realistic? Spare me the awkward non-kiss and just kiss the woman already.

What are your thoughts? Do you want a Kiss Note or do you just want Minho? Leave your comments below.