Why Kim Yoo-jung's March Photo Spreads Are Not Age Appropriate

There are only three things in this world that make me feel uncomfortable: dairy, long-division, and Nichkhun‘s eyebrows. But after looking through young actress Kim Yoo-jung‘s photo spreads in the March issues of High Cut magazine, Allure, and WannaGirls, I’ve found something else to put on that list.

The photo spreads not only make me just a tad bit uncomfortable, but they also make me question how appropriate some of the depictions of these young actors are. I hate to use the word “appropriate” mainly because it makes me sound like an old grandmother yelling at the neighborhood kids to get off of her lawn, but the question of appropriateness is relevant especially when it concerns children. The concept of the WannaGirls photo shoot is “Girl, you will be a woman” and features Kim Yoo-jung playing the role of a young girl transitioning into adulthood. In one photo she wears high heels and a pink backpack; in another she wears a bow in her hair and sits inside a small suitcase as if she were playing dress up. But the photos are overly sexualized, especially for a young girl at the young age of 12 years-old. Her expression is sullen, almost scared. And a few of her shots show a lot more skin than I think is acceptable for a child.

So how young is too young? And when is the line crossed from art to alarming? Well, Korean entertainment is interesting. In K-pop, the sexualizing of young performers (bold or subtle) is common—mundane even. I mean, how many times did the 16 year-old Suzy perform the salacious “Bad Girl Good Girl” without anyone batting an eye?

But in K-dramas, young performers play a different role. They are used for the sole purpose of playing precocious kids who offer adorable sentiments, clever lines,  and thoughtful insights. Or they play the child roles in historical dramas, often-times delivering performances more inspiring than their adult counterparts. In my experience, it is not common to see young actors play risque roles. Which is why Kim Yoo-jung’s latest spreads have been jarring.

I first watched Kim Yoo-jung in the drama Dong-yi, where she easily brought tears to my eyes during her final few scenes of the drama. But it wasn’t the first drama she’d acted in; her career started at the age of 6 and since then, she’s starred in at least three dramas a year. So with six years of professional acting under her belt and a ratings monster like The Moon That Embraces the Sun on her resume, it can be hard to remember that she’s still a youngster.

So if I had my vote, Kim Yoo-jung would show up in magazines the same way she would in dramas: sweet, innocent, and still inspiring. There’s no need to grow up so fast because there’s plenty of time for that later. What say you all? Do you think the photos are too sexualized for a girl her age? Or am I really becoming the stuffy, conservative grandmother and I need to lighten up? 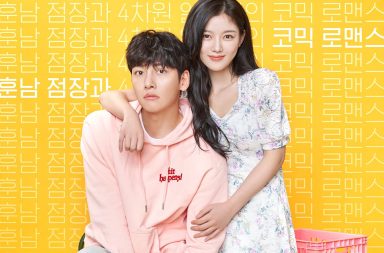 For Your Viewing Pleasure: Scarlet Moonlight