This past week, the uber popular Shut Up: Flower Boy Band wrapped up its 16-episode run, proving that hot guys with instruments will always make for great ratings (unless your’re Dream High 2, of course). The drama offered an engaging story line, enjoyable music, and most important, amazing chemistry among the male characters. And how do I know all of this when I haven’t even watched one nanosecond of the show yet? Because everyone I know can’t stop talking about the bromance!  Apparently, there was bromance here, bromance there, and  more specifically bromance everywhere. But lately I’ve been starting to have a beef with K-drama bromances.

Ok, so maybe beef is too strong of a word. Perhaps luncheon meat or light tuna are more suitable to express my feelings. Because really, how could I not squeal when Sam-dong and Jin-guk wrestled each other for the rights to underwear in Dream High? Or not secretly wish for Jae-shin to bro up with Yong-ha in Sungkyunkwan Scandal? And seriously, how could I possibly scoff at the dangerous levels of bromance that were threatening to melt my computer screen during Flower Boy Ramyun Shop? Who am I kidding, I love bromance. 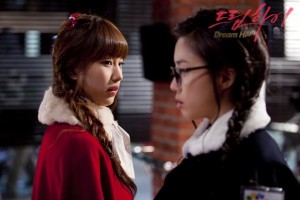 But is there such a demand for brotherhood, that K-dramas have forgotten about sisterhood? Because I can count on only three fingers the number of dramas I’ve watched that center around females and their friendships with each other. What is it that appeals to audiences about bromance that sisterhood does not offer? Or better yet, why do K-drama producers think sisterhood stories do not appeal to audiences?

The first drama I watched all the way through was Boys Over Flowers, which is about a girl, Geum Jan-di, whose world changes after she lands smack dab in the middle of a group of four flower boys. While the relationship among the boys seems cold and held together only by a shared experience of wealth, they still have each others backs and best interests at heart. But Jan-di is, for the most part, a loner. While she was getting cornered by gangsters in Macau, landing in the middle of a pornography ring, and being kicked out of her home by someone else’s evil mother, I kept wondering, “Doesn’t this girl have some girlfriends to help her out?!” Granted, she did have one girlfriend but that girl was spending most of her time being wooed by Kim Bum. Needless to say, she was kind of busy with that.

In any case, in K-dramas, there is a common theme of one friendless girl surrounded by guys bro-ing it up while she’s left to ogle at their hotness. I wonder what that would look like if it were reversed.

When guys interact in K-dramas there’s always room for hilarity. The awkwardness of a closed quarters encounter between two guys is for some reason funnier than one between two women. And a male showering motherly instincts on another male just seems inherently more sweet than a female mothering another female.

There are fun complexities when males interact in K-dramas, but the relationship between women is oft times one dimensional. When women interact it’s often  under the blanket of jealousy, deceit, and betrayal. Take Personal Taste, which tells the story of three good friends. When one’s jealousy becomes too much to bear, she runs to the alter with her best friend’s boyfriend. And after that plan falls through, she goes after her best friend’s new love interest.

In 49 Days, a group of three friends split after the revelation that one of them is dating the other’s fiance. And in Lie to Me a pair of best friends part ways after one girl marries the other’s long time boyfriend. Anyone see a pattern here? 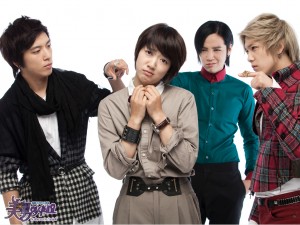 In dramaland, the love triangle dynamic is presented differently when it comes to men. For instance, in You’re Beautiful, the three male leads are all aware of each others’ feelings for the female lead, but are still able to respect each other and make with some hilarious bromancing. The same can be said for the love triangle dynamics in both Boys Over Flowers and Flower Boy Ramyun Shop.

My purpose is not to point out that women go around stealing each others’ lovers all over the place in K-dramas (although it’s not far from the truth), but to highlight that there’s a trend of dysfunctional relationships between women in K-dramas. There is a missing bond between a group of women who support and encourage each other without the undertones of malicious intent.

So back to the original question: why do K-drama producers think sisterhood does not appeal to viewers as much as bromance does? Most viewers of Korean dramas are women. Does this mean women would rather watch stories of brotherhood than sisterhood? According to one professional cartoonist I had the opportunity to talk to recently, the television industry understands that young girls are more likely to watch male protagonists in their cartoon shows than boys are to watch female protagonists.

Is there something inherent in us that makes us more inclined to watch males interact on screen than females? Does it have anything to do with the fangirls inside of us that want to see our favorite guys cuddled up next to each other? Or have K-drama producers created a demand for bromance without exploring the gem that is sis-mance? Bingo.

These girls prove that women can bromance with the best of them! And they’re not the only ones. Remember the three dramas I mentioned that I recall having some of the best sisterhood stories? One of them is Protect the Boss. It was the first time I saw two girls who not only refrained from fighting over one guy, but also built a friendship because of it. The Woman Who Still Wants to Marry based its entire plot on the relationship of three single women who supported each other on their zany path for love.  And Dream High is another K-drama where the idea of sisterhood is developed very well. One scene between Go Hye-mi and Yoon Baek-hee still brings me to tears.

Yes, bromance is awesome. I can’t get enough of it. But I also can’t get enough of sisterhood. I want to see more of it! Are there dramas you guys have watched that show some really fun bromance between women? And why do you think that there is a lack of strong female friendships in K-dramas?