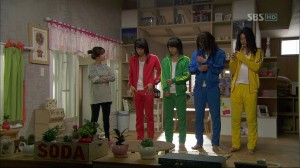 It was a big week for K-drama fans as we said goodbye to the got-sort-of-good-at-the-end Dream High 2 who totally punk’d us with the JYP  as Yang Jin-man, auditioning for JYP as himself, in those horrible plastic clothes and the wonderfully angsty Shut Up: Flower Boy Band and the debut of four brand spanking new dramas.  We also had the return of K-pop’s shiniest boy band and its oldest.  If you’re not caught up on your K-pop and K-drama turn back now, but if you are, keep reading to find out what were the top 5 Things that happened in K-pop last week that were a bit more special than the rest.

It’s been almost a year and a half since SHINee was promoting their Hello album and they made their return last week with Sherlock.  And while I think all K-pop stylists should be stripped of their hair extensions, especially with this latest travesty of making Taemin look like the K-pop Jesus, and Key has questionable bangs and Wonder Woman shorts– their title song is actually pretty great.  Having SHINee active again in the K-popiverse is a good thing.

4. Getting to know Shinhwa

I know of Shinhwa and about Shinhwa, but as a relatively new K-pop fan I don’t know Shinhwa.  I was interested in seeing what their comeback would be like and when I saw that they’d be on their very own variety show–I had to check it out.  The second episode of their show was pretty hilarious and seeing their rapport with each other shows why they’ve been able to be K-pop’s longest lasting boy band– uh, man band?   My fave segment from the show where they take on a bigger giant in the Korean entertainment industry than themselves and don’t miss out on Min-woo‘s golden “panties” (begins at 3:45).

3. Ailee belts out an Immortal Song

On the latest episode of Immortal Song 2, rookie Ailee belted out the legendary Patti Kim hit, “Light and Shadow.”  Her role in Dream High 2 was relatively small, but the exposure was just what she needed along with her hit song “Heaven” to get herself on the K-pop map.

2. The Battle of the Premieres

Four new dramas premiered last week: SBS‘ new Monday-Tuesday drama Fashion King; and three new Wednesday-Thursday dramas KBS‘ Equator Man, MBC‘s The King 2 Hearts, and SBS‘ Rooftop Prince.  I’ve watched the first two episodes of all the shows except Equator man and so far my favorite overall would have to be Ha Ji-won and Lee Seung-gi’s The King 2 Hearts because I think it delivered the best acting and story so far.  Fashion King was kind of all over the place in story and acting, but I’m not giving up on it yet.  I do have to say that Rooftop Prince comes in a close second, because although the storyline is kind of out there with all the time travelling and evil plots–it was hilarious.  The boys that make up the time travelling heroes: Park Yoo-chun, Lee Min-ho, Choi Woo-shik and Jung Suk-won get an A+ for their acting as Joseon men being rudely introduced to modern South Korea.

The ending of Shut Up: Flower Boy Band has to be one of the best I ever watched, especially when everything that I wanted to happen didn’t or did–but not quite in the way I envisioned it. I still think that a couple of years performing as Eye Candy could’ve helped them all on their chosen career paths–a musician, an idol, an actor, a business man, and an… anything but a gangster’s son. But their slight brush with fame showed them what idol life was like and they were all lucky to get a second chance at choosing their path.  While not the fairy tale ending, we still got a happily ever after because in the end the boys chose their paths in life. The chemistry between the boys was awesome and I’ll miss my weekly dose of “Eye Candy.”