SNSD, along with many of Korea’s most glittery pop sensations, recently made their way out to Paris to participate in the K-pop Festival Music Bank in Paris.  And somehow, they managed to finagle their way onto a French talk show called “Le Grand Journal” for what has got to be the strangest 31 seconds I’ve thus far encountered in my time as a SONE:

Granted, this is not the only interview they’ve done in Paris, for that would be kind of embarrassing.  But let me just take a moment here to go through some of the inanities of this…can I even call it an interview?

1) So you have 30 seconds during which to ask SNSD questions, and your first question is…to hear 5 seconds of the song they just finished performing?  Efficient use of your time, French television show.  5 points.

2) How on earth did both Tiffany and Sooyoung immediately respond to the second question with the same answer?  Were they briefed on this prior to the interview?  Are French actors a big thing in Korea?  Are SNSD secretly a bunch of Francophone cinephiles?  I’m asking because I am one part impressed, but two parts baffled about this.  I can only name one French actress, and even after all these years, I’m still more likely to just call her “that girl who played Amelie.”

4) Jude Law?  Really?  I had no idea he was so relevant in France…or that he was currently super relevant in America…or that Tiffany was such a fan of the man’s work in Closer.  Also, that’s probably not how I would start off a dialogue with Jude Law; I’d probably shake him by the shoulders and scream, “HOW COULD YOU DO THAT TO SIENNA MILLER?” but then again, nobody asked me, and maybe Tiffany thinks that he is sexy, also.

5) Okay, really, who wrote these interview questions?  And the girls had to have been briefed on this, right?  Right? 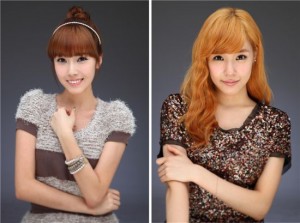 Aside from the totally bizarre nature of the questions asked (and I really am confused, because if I had 30 seconds with SNSD, those are not things I’d want to know at all, and really, my life as a Sone is none-the-richer because I am now aware of the fact that Tiffany and Sooyoung think that some French actor is sexy), the girls look cute and personable, and even if some of them completely hate their international promotions, at least they’re acting like they are having a good time.

Of course, this interview (really, am I supposed to be calling it that?) has been subject to pretty much the same criticism as have all of the other interviews that SNSD has done since they began promotions in English-speaking countries (though I’m aware that France isn’t exactly English-speaking): Tiffany just talktalktalktalktalks and the other girls just sit there without being able to get a word in edgewise.  And god, how rude is it of Tiffany to steal the limelight away from the others, especially Jessica, who speaks English just as well as Tiffany does without sounding like a total ditz? 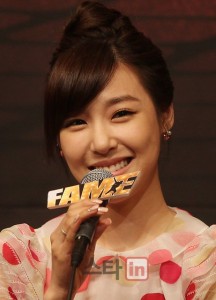 At this point, it would behoove me to come clean: Tiffany is my ultimate bias and secret best friend, and I am usually all about this girl.  But even I can’t stand her on American/non-Korean talk shows; maybe it’s because I was born and bred on the East Coast and begin to break out in hives when I hear anyone speak with a Californian accent, or maybe it’s because I secretly also feel like her behavior on American programming makes her look like a total attention-seeker.  Whatever the reason, I am just not really having it.  Even at SM Town Live in NY, during her introduction, I wanted to seize the microphone violently from her hands and slap some duct tape over that trap of hers.

However, try with me to imagine a counterfactual in which Tiffany says either nothing or next to nothing.  What on earth does an interview with SNSD look like then?  Unless Jessica suddenly develops a motormouth, or the rest of the girls swallow the Rosetta Stone in one fell swoop and begin speaking better-than-rudimentary English, then interviews are gonna be either: (a) supremely awkward, (b) supremely quiet, (c) some combination of the two, unless Sooyoung shows up with this or (d) completely nonexistent unless the shows on which SNSD appears manage to get an appropriate Korean translator.

I know that it’s easy to get butthurt and pissed about the Tiffany onslaught that we see in these interviews, and sure, it’d be nice if Tiffany would yield the floor to Jessica (or anyone else) every once in a while, but it’s not as if there’s a terribly strong precedent of Jessica overtaking or even just simply managing to keep up with Tiffany as she talktalktalks.  And keep in mind that the fact that Tiffany speaks English and is willing to talk a lot takes a huge burden off of the shows on which SNSD appears in that it is possible to have interviews with them without expending resources on translation.  This in and of itself can translate into more invitations for interviews and performances, which will ensure the longevity of their US/Western promotions and thus provide the others with more time to beef up their English skills.  Everybody wins!

But really, I will not watch another SNSD interview if the questions are like this.  Get it together, western media.  That is all.