There’s very little in this world that can make you feel as safe as a bodyguard can. Their sole purpose is to protect you, to ward off potentially harmful vagrants, and to take a bullet for you if the moment calls for it. And while one can imagine what a stereotypical bodyguard looks like, in television there’s been a shift in who has been “protecting the boss.”

In K-dramas, bodyguards used to look something like this: 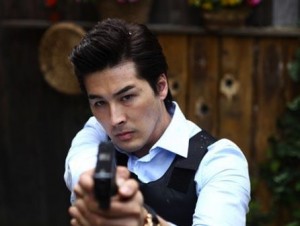 The relatively recent trend of petite female bodyguards in K-dramas is, I think, fascinating. It raises questions about gender, masculinity, and the relationship between female bodyguards and the men they protect.

The men they protect: the idea sounds foreign, funny even. But the bodyguard drama debunks the age-old sentiment and frequent motif that female heroines need male heroes to protect them. These days, many female characters are doing the protecting, proving not only how badass they can be, but also how fun it can be to watch them. Take No Eun-seol from Protect the Boss, whose nurturing instincts and roughneck predilections made her the prime candidate to guard her supervisor’s bratty chaebol son. Or Spy Myung-wol’s title character, whose gun-expertise more than made up for her lack of experience with the opposite sex. Or Kim Na Na, who nearly died to save the City Hunter’s life.

While these women tend to be stronger and more agile than their male counterparts, the men of K-dramas seem to have no problem with that. In fact, they seem to welcome the fact that these women can hold their own in hand to hand combat, all the while protecting them. In K-dramas, there is rarely, if ever, a discussion of the guard’s female-ness; it is almost as if it is invisible. Instead, the idea that she’s a female is overshadowed by the fact that she is damn good at her job. Male characters will never reject a bodyguard because she’s a woman, but rather hilariously, because he doesn’t like her as a person.

But being a man’s bodyguard comes with gender complexities that K-dramas have explored, both successfully and uncomfortably. One of these complexities deals with physical violence between a man and his female bodyguard. Is it okay for a male character to get physically aggressive with his bodyguard even when she is stronger than him? Does her own physical strength make it okay? If you answered that violence is never okay, then you’re a winner.

But watch why K-dramas have succeeded in making this dynamic extra uncomfortable in this clip from last summer’s drama, Myung-wol the Spy:

The harsh and unjustified slap rang loudly through K-drama land, and made viewers like me wonder, “Wait, did that just happen?” And then I realized that YES, this guy just slapped a woman. After I first watched this, I remember looking around thinking, “We are going to address that…right?” I was disappointed, especially since the blow was never resolved, but swept under the rug.

And in the recent rom-com, Wild Romance, Lee Dong-wook’s character attacks his female bodyguard in an intense and lengthy fight that left me feeling uneasy:

Although she fends him off with professional moves of her own (the actress in this clip, Lee Si-young, is actually a two-time national amateur boxing champion), the visual is still unnerving, especially when her bruised face offers the reminder that at the end of the day, she is still a woman.

While a few bodyguard dramas reject conventional gender roles and interactions, they also reinforce them. They reinforce the idea that no matter how emotionally and physically tough a female bodyguard may be,

she’ll still fall victim to the one-sided love cliché that’s prominent in most other dramas. The dramas also feel obligated to remind us that when the heroine is harassed by another man, the male character is usually the one who bursts in, machismo ablaze. This isn’t necessarily a bad thing, but an observation that there is still a high value placed on a man who can protect his love interest. If he cannot protect her, does that make him less of a man? And if she protects him, does that make her less of a woman?

But with all of the complexities and contradictions of the bodyguard drama, the fact that these gender roles are being explored within this frame can only be beneficial for K-dramas and their viewers. It forces us to ask questions about the push and pull of power in male-female interactions, and to critically analyze the gray areas that exist within non-traditional relationships.