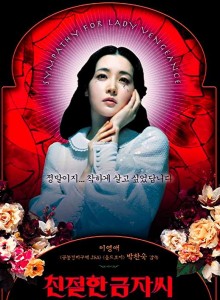 It’s been almost seven years now since the release of Sympathy for Lady Vengeance, otherwise known by its simplified title Lady Vengeance, and even after all this time this film is still overshadowed by its inferior older brother Old Boy.  While Old Boy is one of the most discussed and imitated  films of the past 10 years, Lady Vengeance appears to mostly be relegated to a footnote, which I believe is a gross disservice to a great film.

Lady Vengeance begins with our main character, Geum-ja Lee (played by Lee Young-ae), being released from prison. She’s presented with a block of pure white tofu, which is traditionally given to prisoners by their families upon release from jail. The tofu represents a new beginning: now that the criminal has paid their debt to society and is starting to begin their life again,  they are trying to once again be as pure as the white tofu they consume. While we look around at other prisoners participating in this ritual, we see that Geum-ja has no interest.

She brushes her greeters away. Her face displays the opposite of purity; it shows anger and desire to complete a task, an unholy task. As the story unfolds we learn that Geum-ja has served time for the murder of a young boy, and we also learn that she did not commit this crime, but was in fact forced into confessing to a crime she did not commit.

Throughout the story we are introduced to other prisoners that Geum-ja had served time with and through flashbacks we come to see their interactions within the prisons, and the various ways that Geum-ja has helped others while in the prison. Within prison Geum-ja was the opposite of angry, she showed an attitude of self sacrifice and care. Although I have little doubt that deep in Geum-ja’s heart she was a good person, it’s clear that all her attempts to draw people to herself were all meant to line up with the overall desire of completing her master plan.  Similar to Old Boy, the main character’s revenge was not hastily thrown together, it was slowly orchestrated over years and years.  Now that Geum-ja has been released she can put the plan into action, call in favors from all the prisoners she had helped, and get the vengeance that has been her driving force for the thirteen years while in prison. All is going according to plan, until she meets her daughter Jenny.

Geum-ja tries to connect with her daughter, who had been raised in Australia and doesn’t appear to know any Korean; however, it is a challenge. She brings her daughter back home to Korea, but just as they have to struggle between the language barrier, there is also an emotional barrier in the way.  As the story unfolds, finally in the last third of the movie Geum-ja captures the person who forced her to confess to the murder years ago, Mr. Baek (played by Choi Min-sik). Just when it appears that Geum-ja is about to take her vengeance, an even darker secret is revealed about Mr. Baek which shakes Geum-ja’s desire and resolve for revenge.  Even though Geum-ja has lost so much, lost years of her life locked away in prison, lost her value in society as she is now viewed as a murderer, and lost years of time with her daughter, she realizes all that she does still have.

I’m going to refrain from going into too many more details of the plot, because there’s a great beauty in watching the rest unfold. There are no gimmicky twists like in Old Boy; what follows here is a very organic, very real and very shocking completion to the story. I will say that the movie is not for the faint of heart. Although the movie doesn’t contain any of the more “extreme” moments of Old Boy there are some scenes, one in particular, which really hit me at a deep level. I even wondered if I could even go on further because I was so truly disturbed. For those that do press on you’ll find an extremely beautiful and touching ending that makes all that came before it worthwhile.

On a technical level the movie is beautiful. Park Chan-wook shows an amazing level of skill, a level that sadly he has been unable to reach since. There are two different versions of the movie, one version starts to fade from color into black and white about two thirds of the way through. The effect is amazing, and gives a very Hitchcock-ian feel to the film. The more common release of the movie is color from start to finish, and though it’s a great movie in color, it’s truly something special in the fade to black and white. The story itself can be a little confusing at times on first viewing. We’re introduced to a variety of characters, and the timeline jumps all over the place as the flashbacks are presented. On additional viewings it all makes perfect sense and works very well — on first viewing though, it was a little difficult. The acting in the movie was excellent.  Lee Young-ae strikes the perfect balance between a woman scorned and a deeply loving and affectionate mother.  Choi Min-sik’s role for the most part is pretty small, but he plays it so well. While the movie begins with the pure white tofu, Choi’s Mr. Baek would be the complete opposite. Mr. Baek is evil incarnate, with no redeeming factors. We are given no reason or desire to emphathize with him in any way.  If there’s one fault to be had with the movie, it would be some of the English speaking characters were not top notch. I’m not sure if it was the acting, or if there was some additional English dubbing, but it just wasn’t good. Thankfully it didn’t ruin too much.

This movie is the third in Park Chan-wook’s “Revenge Trilogy” and it’s really a fantastic way to wrap things up. While the other two movies were more “male focused” with two male characters each trying to seek revenge on each other in a mounting way–in this movie, for the first time, we have a character who actually takes a minute to step back and question “Is allowing me to have my revenge worth it?” I think it’s no mistake that a woman was used as the lead in this instance. This film is truly Park’s masterpiece, and should go down as one of the highlights of Korean cinema. It’s a shame that most film viewers would rather be shocked and titillated than struck to their emotional core.