Plastic Fantastic: IU's Face is Real, But Jessica's May Not Be 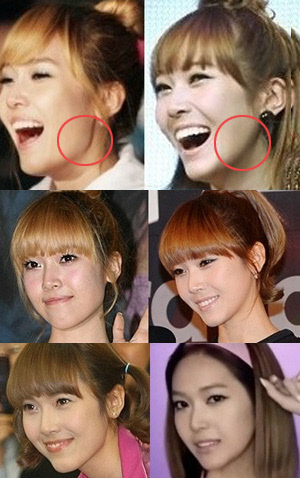 Netizens have been buzzing about the plastic as well as the not-so plastic faces of female idols again, and this time they’re after Jessica and IU. A couple of days ago, fans unearthed an old picture of SNSD’s resident ice princess Jessica and compared it to a more recent profile of her face. The difference in her jawline is pretty obvious, but subtle enough to have never been noticed it at all had it not been for the help of persistent and eagle-eyed fans. A nice smooth chisel on a sharp corner, and Jessica goes on being as gorgeous as ever. Neither SM Entertainment nor Jessica have confirmed this observation; however, I don’t think any one of us need a confirmation for this one.

IU, however, has been trying to deny rumors of plastic surgery as of late. Fans have been picking up on her changing appearances, and point to the knife as the reason. At first, IU approached the rumors  by explaining her face looked different due to weight loss and a crap load of make up, however it proved insufficient for stubborn netizens. IU recently released childhood photos to combat the rumors, revealing intimate shots a younger IU who looks pretty much the same as she does now.

Whenever debate or accusations or even hate about an idol’s alleged or proven plastic endeavors come to light, I can’t help but shake my head and ask, “Who cares?” For an audience that is so demanding of perfection at all times, no matter how little sleep you have gotten or how little sustenance you’re allowed to eat, I often wonder why some have critical and even punitive remarks for idols who carve up their face.

For one thing, a change in appearance is typically brought on from the result of pressure or stress or insecurity, and I’m sure for an idol, those feelings are magnified all the more because their lives are constantly being measured up to standards of beauty and perfection. So, it doesn’t surprise me to see an idol, especially a female idol, undergo some cosmetic surgery. Look at Jessica–one of the most popular members of the one most popular groups in K-pop. I can only imagine how much pressure she had to feel to decide to change the way she sees herself, even if it was a tiny little thing like the rounding of a corner on her jaw.  Why do we care that Jessica looks practically the same except for an edge on the side of her face? She still looks hot doesn’t she? And IU–why did it matter so much that rumors had to be clarified? Would it really change the way you see IU and appreciate her music? Probably not.

In IU’s case, we see how netizens point the finger at perfection and blame plastic surgery. IU is hands down a gorgeous young woman–in my opinion, one of the most beautiful girls I’ve ever seen in K-entertainment. I feel bad that she, as well as other idols who’ve experienced this annoyance before, had to defend her natural features as if plastic surgery was some forbidden evil, when we know very well that in South Korea, it certainly is not. 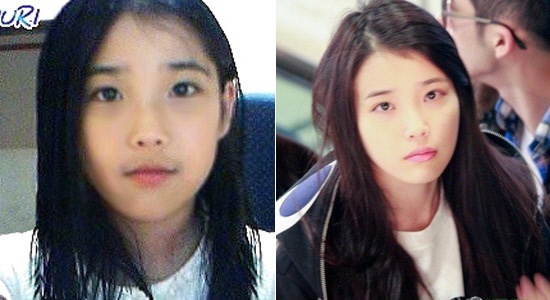 I guess the way I see it is plastic surgery is another avenue to reach some sort of ideal image of beauty. And in an industry where we as fans constantly demand ideal perfection and aesthetic from the idols we enjoy, it doesn’t shock me to hear about idols changing up their faces. It is even more interesting to hear about how so many netizens demand clarification about idols and their plastic surgery when South Korea as a country has the highest percentage per capita of cosmetic and plastic surgeries in the world performed every year. In a society where I would  think plastic surgery is already acceptable and fairly common, why are idols getting heat and harassed for actually or allegedly receiving plastic surgery? Personally, I could care less that Jessica has chiseled down her jaw, and even less that IU looks exactly the same. Idols are forced to live under a critical spotlight; it’s important we remember that idols are compared to unrealistic standards of performance and appearance, and then think about to what degree our criticisms are warranted.