Awkwardness Abounding: SNSD at the Club 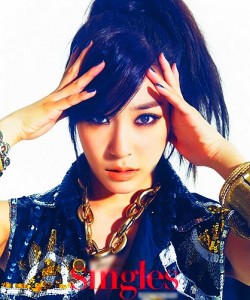 I just want to know what SM was thinking when they arranged for the girls to make a special guest appearance at Club Chrystie 141 in New York City after their appearances on Letterman and Live! With Kelly. Did they expect everyone to fall over themselves in order to catch a glimpse of nine leggy girls? Looking at the crowd, I could have sworn the MC asked for a moment of silence.

When I first heard about SNSD being at a club, I was just expecting to see the members enjoying some down time over a couple of drinks and a few dances. Boy, was I wrong. This could’ve doubled as their introduction into the U.S. nightlife scene. After realizing that they were the VIP guests of the night (they were there at the invitation DJ Reg West, who was holding a private birthday bash), what surprised me was the incredibly lackluster response the girls received. Talk about cringe-worthy.

When Tiffany was giving her speech, the crowd seemed completely uninterested. In the video you could hear numerous people speaking over her and not caring that they were in the presence of South Korea’s super-group. This seemed to prompt her to cut her speech short and awkwardly clap after handing the microphone back to the MC. But what made me facepalm even harder than their awkward appearance were comments from the fans. One fan said “SNSD doesn’t need to cater to America. America needs to cater to them.” Come again? Excuse me while I go laugh over in the corner. Or “You are so lucky to have SNSD, don’t curse around them!” Um, did we forget that they were at a club? If they were trying to avoid hearing curses, the club is not the scene for them. Every other song is explicit there.

I think the only thing that saved this appearance from being the most epic fail was Hyoyeon and Sooyoung. When the music came on, Hyoyeon was immediately energetic and into it, while Sooyoung had to warm into it for a few seconds. Some of the other girls just slightly bounced to the music while the others were completely standoffish. I have a feeling Seohyun felt so out of place and wanted nothing to do with it.

What fans need to realize is that SNSD is playing in a whole different ball park now. I often hear “Don’t taint our nine precious angels,” as if any foreign place that hosts them is the big bad wolf. It’s time to get over that and realize there’s a world outside of the box SM traps them in bubble that fans encapsulate them in. These are nine girls in their 20s who must eventually grow up and understand that the world doesn’t work the same everywhere.  There is a reality that they may not be as big or as well received everywhere as many had hoped. This just serves as a reality to all the K-pop groups who will try to make a crossover in the U.S. in the future. It’s always good to build up a solid foundation whether fame does or doesn’t come immediately so that one can have something to fall back on.

I guess SM expected for them to walk in and own the place. Well, that obviously backfired.