A Touch of miss A 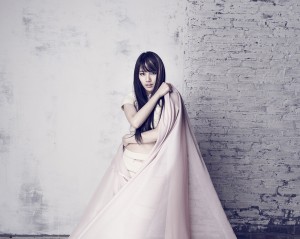 After over a week of teasers, miss A are nearly set to make a comeback with their upcoming mini-album on February 20th! The mini-album, entitled Touch, will contain five tracks: “Touch,” “Lips,” “Rock n Rule,” “No Mercy,” and “Over U,” as well as a bonus remix of “Touch.”

JYP has released a batch teaser photos, as well as four music video teasers (each starring an individual member) in advance. This straightforward and no-nonsense approach to teasers is a welcome breath of familiarity in contrast to the long and drawn out methods that others, such as SM have been experimenting with as of late.

Lets address the teaser images first. The four girls are photographed wearing white bandages, set against a faded white brick wall, with a sheer pink sheet billowing around them. The photos are sleek, fairly monochromatic with a splash of color — the pink tint as well as the red rose petals — personally the kind of style that I think works with miss A the best (“Breathe” was a bit of a colorful hicccup and anomaly for the girls). The mummy-like bandages wrap around each of the girls, hiding and shielding what I presume to be figurative wounds and vulnerability underneath. 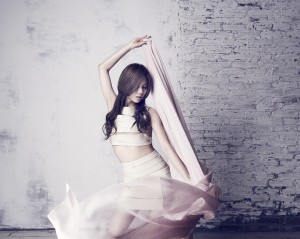 Can we just talk about hair for a moment? I’ve never been a fan of blonde highlights on black hair, although as long as they prove to be more white-blonde than yellow-blonde, I think I could at least grow to become accustomed to Suzy‘s streaks over time. Jia‘s hair is now back to black, which I think looks great on her. Although I loved the fire orange from the “Goodbye Baby” promotions, I have also felt worried about the health of her bleached hair, so I think it’s good that she’ll have the chance to finally give those fried strands a bit of a break! Fei‘s hair hasn’t changed too much, but she has a classic beauty and look that works well for her, and doesn’t really warrant a change.

And now that brings us to Min. Oh, Min. I don’t know whether it was the stylists’ decisions, or personal taste, but Min’s hair for the past couple of months has been outright unflattering to an alarming degree. Not only did the super-blunt bangs not complement the shape of her face, but for a while, she also had those chunky highlights that — as I mentioned earlier — are a big pet peeve of mine. I cannot even begin to express my appreciation to the stylists for revamping her hair for their comeback promotions. Not only do we get to see her bangs slightly parted to the side, but we also get to see Min with long hair (although I’m pretty sure those are extensions). While I loved the super-short hair of Min when miss A first debuted with “Bad Girl Good Girl,” I also liked her long hair from her days as Lil’ Jon‘s protege in the US, so I’m overall happy and pleased at her new look.

Next, we move onto the four teaser videos.

Suzy’s teaser video was released first. In the video, you see her walking barefoot across a rose-strewn floor towards a mannequin with a tuxedo. As she rests her head on the chest of the tuxedo, she reaches up to its lapel to caress a white rose that turns red at her touch. White roses typically symbolize death, while red roses symbolize love, so the overall imagery suggests the reawakening of love, from the stupor of death. The scene cuts out to a shot of the four girls lying on a bed of roses, as well as an individual shot of her face. The scenery and music has a very gothic yet grungy feel to it, with the eerie notes (that sound similar to a harpsichord) being played out in between the clanging of gongs. There’s a horror aspect to the cinematography as well, with the use of flashing frames and skewed colors, as well as the use of a disjointed time scale that coordinates with the clanging to create a jarring effect.

The next teaser video that was released was Jia’s. As Jia sits at a piano, a man’s hand reaches out from behind and touches her back for a brief moment, while he simultaneously leaves her a bouquet of red roses on top of the piano. As Jia turns her head to look, the hand is removed and the man (who we never see a full shot of) walks away off the screen. Jia leaves a trailing glance in the man’s direction, before reaching her hand out towards the roses. She pricks her finger on the thorn of a rose, drawing out a drop of blood

Fei’s teaser was next. Fei sits next to a birdcage, holding a red rose in her hands. There’s a brief shot of her opening up the birdcage to take out the rose (I presume this is a flashback; time becomes disjointed in the video with the clanging). She then approaches the man and pins the rose on his lapel, pricking her finger in the process. The man reaches up to barely touch her face, and then walks off the screen. She turns her head to watch him go, with her hands clasped together in front of her.

The final teaser was Min’s. Min is sitting on a chair at a table for two, and reaches an arm out behind her to grab the arm of a man walking in the opposite direction. The clanging cuts to shots of her standing around the room. She picks up a pot of red roses and pricks her finger on a thorn, causing the pot to drop and smash on the floor (there’s a freaky time-reversal effect for a split second here). Min then brings her hand up to her mouth then looks around the room, and there’s a fleeting shot of the man leaving the room as she reaches out for him. 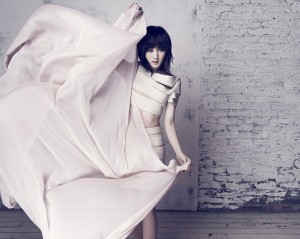 All four of these teasers are absolutely gorgeous, and do a good job of hinting at the overall message of “Touch,” which is meant to symbolize “the warmth felt by someone when pricked awake from being numb to emotion.” Do they give us a good idea of what will be in the music video? Not necessarily. Remember those gorgeous teasers for “Goodbye Baby” (which also involved slow motion, roses, a man whose face we never got to see, and a sombre background)? None of those shots were used in their “Goodbye Baby” music video, although the stormy atmosphere of the teasers proved to be similar. I think that it will be a similar case for the “Touch” music video: a carryover of the gothic theme, but different shots.

I won’t lie — as much as I hate throwing the word bias around, miss A is undoubtedly one of my favorite groups in K-pop. I’ve noticed over time that I tend to have a very fickle relationship with girl groups. With guy groups, my love tends to be lukewarm at first but grows over time, whereas the opposite tends to happen with girl groups: many have impressed me from the get-go, but all but a few have let me down over time. Although I still support and have love in my heart for these letdown girl groups (or more specifically, fond memories and emotional attachment to certain members of these groups), in regards to their actual music and promotional material, I’ve learned to lower my expectations. 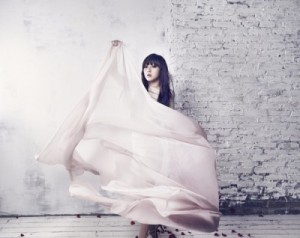 Not so with miss A. The main essence of this group — class with a bit of a kick — has never really left the girls nor their music, in spite of their commercial success. There hasn’t been a single release that I’ve been disappointed in (I know that there are some out there that disagree in the case of “Breathe,” but I feel that they were probably the only group that could have remotely pulled off that song, and they did indeed pull it off), and while not every single one of their releases has necessarily been show-stopping or revolutionary, they have always been solid. However, the risk that this now holds for these girls is that the higher that my expectations are set for a group, the steeper my feelings of disappointment will be if they fail to deliver.

Here’s to hoping that the the girls have a solid comeback!

What are your thoughts about miss A’s “Touch” teasers? Are you excited for their comeback?