K-pop companies are always out to make money, and SM Entertainment is no different. Apart from releasing albums, one way that SM likes to make money is through photobooks. Like the name implies, photobooks are simply books filled with photos of a specific group. Recently, I came across SNSD’s Holiday Photobook, and I fell in love with it. Depicting the girls on vacation, the photos are cute and charming, and they have a Polaroid-sort-of-style that I like. The book is broken into eight parts, each chapter showing the girls doing something different. 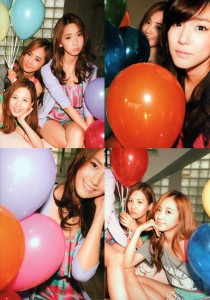 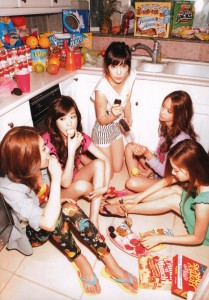 The first chapter is titled “At the Crib on a Day Off; Just Kickin’ It with the Girls” and shows SNSD laying about a summer house. They eat junk food, braid hair, play with balloons, and goof off, sometimes looking totally unaware as the cameraman snaps pictures of them. These pictures remind me of a house party with friends, random snaps being taken and goofiness. The girls are dressed very simply, wearing short dresses and shorts and natural-looking makeup. 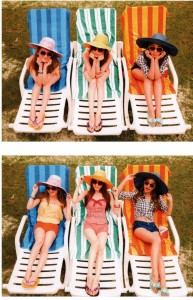 The next chapter is called “At the Backyard Pool, Nothin’ But Chillaxin’,” and shows the girls doing just that. They wear swimsuits and coverups as they lay on lounge chairs and squirt each other with squirt guns. One odd little thing that I’ve noticed is that many of the pictures have the girls looking tan. I find this strange because tanning isn’t common in South Korea and fair skin is usually preferred. The girls do look good with sun-kissed skin, however. I’m glad to see that Hyoyeon isn’t getting shunned in these photos or being given crazy styling. She looks lovely in shorts, tanks, and sunglasses.

The third chapter is “Neighborhood Walkabouts; What We Gon’ Find Cruising Around?” and has the girls walk around outside, posing by walls and nothing else. I found this chapter boring, filled with mostly the same photos of the girls standing still as their pictures are taken. In the other chapters, the girls are busy doing something, whether it be eating or playing, making the photos charming. But there isn’t much charm in the third chapter, just “look at me, I’m pretty.” 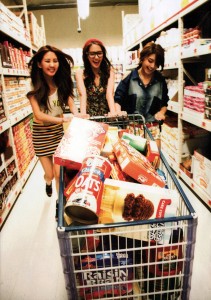 “At the Grocery Store, Hunting for Favorites,” is the fourth chapter and the most unusual. It’s unusual because you wouldn’t expect to have SM send SNSD to a grocery store for a photo shoot. They’ve been filmed at beaches (“Echo”) and parties (“Genie”) before, so those pictures came as no surprise. Still, this chapter was absolutely charming. The girls are dressed casually as they push filled-to-the-brim shopping carts about. I find it a little amusing that nearly all the food in this photobook is junk food — food I’m sure SNSD doesn’t normally eat. But Oreos and ice cream cones add a more fun atmosphere than fruits and veggies do, so it’s not surprising.

The fifth chapter is simply an interview chapter. The sixth is titled “On the Way Back From Outing, Blown by the Breeze & Swing By…” which is the most nonsensical chapter title ever, but you get it. It has the girls walking around outside again, this time in more colorful clothing that is vaguely reminiscent of their “Gee” days. Looking at this chapter reminded me of how much I hated Taeyeon’s old hairstyle (it made her look like a teenager) and am so glad she got rid of it. Other than that, the girls look naturally stunning. 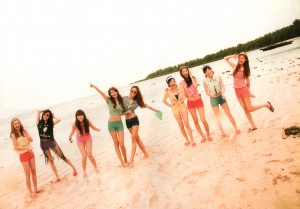 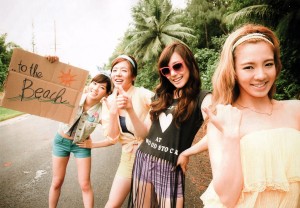 Chapter seven, “Sandy Beaches & Sky-Blue Ocean; Time to Let it All Loose,” has the girls hitchhiking and at the beach. They wear the same clothing as the last chapter and the atmosphere of this photoshoot calls back to their “Echo” days. For whatever reason, I especially like the photo of the girls hitchhiking. It’s just so cute. But I want to burn Tiffany’s Wildfox T-shirt. 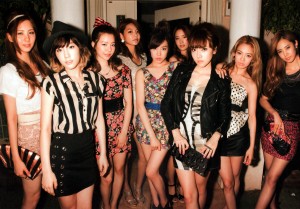 The final chapter, “To a Nightlong Soiree; All Dolled Up and Ready to Hit It” (did Tiffany come up with these chapter titles?), doesn’t have the girls in casual clothing. Instead, SNSD is dressed as if they’re going to club, which they probably are. They’re wearing heavier makeup, their hair is better styled, and their clothing implies a night on the town. Other photos from this chapter feature the girls walking down the avenue, presumably on their way to the party.

I loved this charming little photobook. It’s cute without being overly so and mature enough for the girls’ ages. Would I buy it? No. I can see it online for free. But at least SONEs are getting their money’s worth with this purchase.

What do you think of this photobook? Which chapter is your favorite?