When the news of SNSD‘s new show came out last year, SNSD and the Dangerous Boys, there were quite a few raised eyebrows and curious looks around. When episode one aired, the majority of people that started tuning in gave praise for the girls’ superb ‘mentoring abilities.’ In fact, there was some love for the boys themselves: Yong-hyun, Kyung-kyu, Sung-hwan, Ji-soo and Hoi-hoon, as the viewers were swiftly introduced to them. However, while it may be all cute watching Yong-hyun get all embarrassed over how his SNSD bias, as Hyoyeon was one of his mentors, it wouldn’t be an example of great counselling.

Getting the details right first though, these boys wouldn’t be considered the most dangerous kids around. Their major offenses would be underage smoking and drinking, as well as violence. The other set of offenses are the acts of students that have been failed by the Korean education system. Sleeping in class, failing to study and falling behind in grades, in Sung-hwan’s case, pursuing his interests late into the night because he does not have the opportunity to do so at any other time. It is only inevitable that these boys will end up with less-than-stellar grades and if they aren’t shaping up by themselves and with their family members at a loss of what a do, sending them to some kind of counselling would be a logical option. Transforming a counselling process into a variety program isn’t exactly parallel to logical, though.

It isn’t the girls who have done wrong, nor is it the boys or their family. In fact, more likely than not, the boys and their respective family members went to interviews with JTBC with no knowledge of what the producers of the show were planning. These were just concerned guardians looking out for some boys that needed guidance in their lives. If anybody is in the wrong, it is the show’s producers for thinking that counselling would ever be variety. 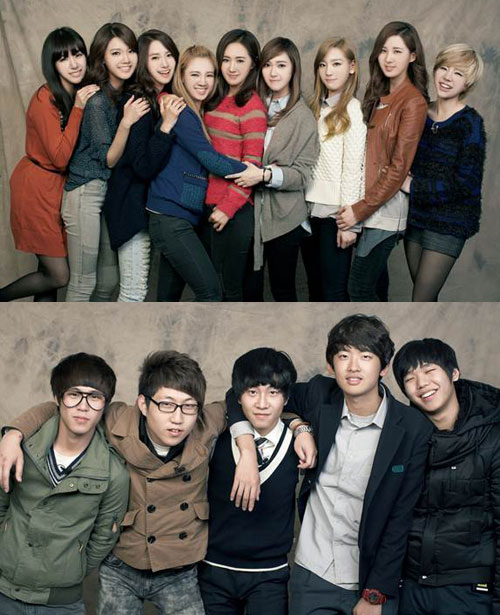 Variety is a form of entertainment. It’s something the viewers turn into once their long day is over to unwind to. Something to laugh at. Counselling, however, is serious business. Counselling means providing emotional support for somebody and helping them through a difficult time, it is a form of guidance, especially in the case of these boys, who should at least, be cured of their drinking and smoking habits. Setting up a dorm, setting up rules that include no smoking and no drinking is indeed something of a start, but even so, it’s going in what appears to be the wrong order. Have any certified counsellors been brought in to inform the boys about the potential medical issues that are tied with smoking and drinking? Whether or not the boys have prior knowledge to this, it is an issue that should be discussed. Why should they sit in a circle, put up their hands and admit that they’ve smoked or drank in the past week? Maybe they don’t show it openly and clearly, but they do suffer some humiliation if not embarrassment, especially since their mentors are clearly people they would like to impress. However, wanting to impress is not an effective way of solving their problems, and that is disregarding whether or not this is the boys’ true intent. Furthermore, after their ‘confession’, they are simply told not to do it again. There is no in-depth explanation, no deep discussion between the mentors and the boys about their motives for continuing their habits. The girls too, need to be told how to mentor correctly, if anything, that you can’t get somebody to quit unless they truly want to. As a third-party observer, I don’t know whether or not the boys are receiving proper counselling behind the scenes, or if they are just being chased with cameras. Without that knowledge, I can only assume they aren’t getting as much professional care as they should be getting and this is unsettling.

A counter though, would be that the boys are getting help. In fact, art counsellors have been called in, the girls have been providing the boys with support through texts and calls, they’ve also been able to sit down and have serious talks with one another. The boys have been given honest, professional evaluations on their feelings and them receiving that feedback is an important factor in their counselling/mentoring process. The girls have been doing their part in helping the boys form bonds with one another, bringing them into activities that rely on teamwork, after all, forming bonds, opening up, are essential parts to the recovery process. Perhaps most notable of these organised activities is the boys’ entrance into one of the most recognised dance competitions — one that Hyoyeon and Miss A‘s Min have participated in and won as a duo pre-debut, known as the ‘Little Winners’. While nobody expects them to win with their cover of SNSD’s ‘The Boys’, there is hope that the boys will gain something in their learning process.

In fact, there’s a strong chance they will learn something during their practices for the competition, if not form strong bonds with one another. For one, these boys live in a dorm together, they were previously complete strangers, but in the space of approximately one month have grown to joke around one another, they know what habits exist between them. Five strangers have become friends underneath SNSD’s care and that’s the kind of stuff the producers of the show want to feed their viewers. It’s classic variety show  tear jerker stuff, especially when they have to inevitably part ways. There are a few examples of shows like this, many with an idol focus. A small start to this list would be Infinite‘s You’re My Oppa?. This would then be swiftly followed by popular variety shows, We Got Married and also Hello Baby. Birth of a Family too, even if that one’s about raising puppies. If there’s one thing that is common in all these shows, it would be the bond that develops between those participating, and the reluctance to part at the show’s end. In all fairness, I’m not saying that shows with this kind of focus are horrific evils prowling pop culture, no way. In fact, I would be a hypocrite, because I enjoy these shows as much as the next person. What is wrong though, is that the producers chose counselling to be the center of this show. 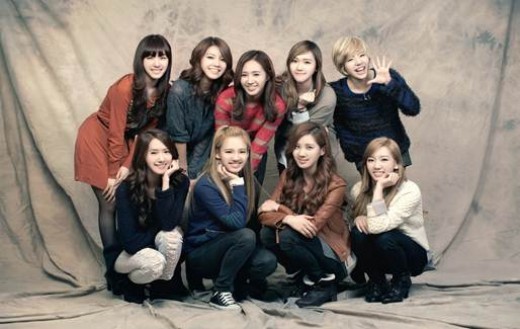 Worse still, helping the boys with their former lifestyle, more specifically, helping them return to it with better behaviours and perspectives — that just isn’t happening. In the fourth episode, there has been considerable improvement in the sense that some serious counselling by professionals is going on along with the girls aiding with whatever they can contribute. However, what the girls can do, is of course limited. I don’t believe that they cannot make an impact at all. I’m sure that the girls will have some kind of positive influence on the boys, but they simply aren’t trained (qualified), nor do they have the experience to deal with what most of the boys have experienced. Although, we can at least count on them to be friends for our five dangerous boys and I say we don’t need to ask much more than that as there’s no guarantee that the girls can really help with all the struggles the boys have.

Both Kyung-kyu and Hoi-hoon — correct me if I’m wrong — have stated that they have been victims of domestic abuse, of violence, be it from their parents or older siblings. I don’t know if the girls have been through something similar, but my guess would be most likely a ‘no’, especially when you factor in the fact that the girls themselves were raised in a completely different environment. Most of them were trainees while in school, some debuted in high school and were separated from their family. They most likely wouldn’t have gone through the same rigorous academic pressure most Korean parents place on their children, thus, they wouldn’t be able to empathise with the boys. This is especially the case when their perspectives are so different. Take for example, Seohyun. While she is in every way a respectable young woman who seems to take her studies very seriously, she might never be able to see eye-to-eye with the boys as she doesn’t have the same experiences, even if we are just speaking on an academic level. For one, Seohyun debuted young, meaning that while promoting as an idol, which is also a full-time job, she had to attend school. Seohyun may have realised that she would only have one chance at school and her opportunities were limited considering her job. The boys however, have been pressured by their parents to study, something that they may have taken for granted for the majority of their youth. Moreover, it could have escalated into an arguing point, while this is highly unlikely amongst the girls of SNSD.

The point that gives me the most discomfort though, is that while the show has the goal of helping the five boys, it also dedicates a fairly significant portion to showcasing the girls’ behaviour. This is understandable, especially when you consider how the girls of SNSD are the mentors in this situation. However, more often than not, we don’t really see them in the mentor framework, we see them as the variety gold some of them are. Sooyoung, as much as I love her, is a prime example of this. She is fairly well-known for being good at variety: she has a good sense of humor, she’s talkative, she does fantastic impersonations. But like all the other girls in SNSD, she finds that her comfort zone is being the idol who is well-attuned to variety. Mentoring, leading somebody, giving support; it’s not impossible for her to do these things, but she is likely uncomfortable and unsure of how to go about it, simply because it’s not something she’s well acquainted with. Maybe this is something the producers have noticed, so a fair portion of the show is actually dedicated to some pure-variety-slash-pimping-SNSD. 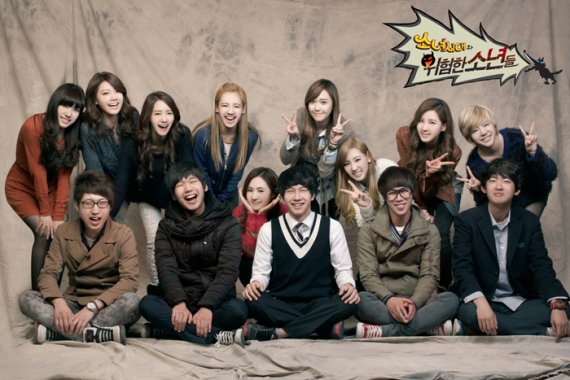 Apart from the mismatch and ulterior motives behind the structure of the program, I do give kudos to the producers of SNSD and the Dangerous Boys for experimenting with this kind of show. Although I don’t approve of openly broadcasting counselling, for one, any form of counselling really should be kept a private matter. Whether or not the participants gave permission doesn’t change that. Moreover, as Epik High‘s Tablo has once pointed out in an interview with CNN, depression is something that is generally looked down upon in Korea and many people are hesitant about reaching out for help. While the boys in this show wouldn’t be what I’d call depressed, they do have issues that need to be solved through some counselling, and that isn’t something most people find acceptable. While SNSD and the Dangerous Boys is first and foremost a show about the girls trying to help some kids that are in a slump in their lives, it also brings forward some issues found in Korean society that really need to be addressed. Most importantly, in my point of view, the Korean education system and the attitude many parents have towards their children’s education. Put it this way: it’s not wrong to be serious about it, but being overbearing and forcing your kids to over-study and go into a profession they don’t want isn’t the way to go. Furthermore, while the show may truly do some good for the boys, whether or not they maintain their new lifestyle after the show is still up for debate. Even so, I’m sure that they’ve got a lot of well-wishers, me included.