Shortly following Kim Jong Il’s death last December, Seoulbeats hosted a roundtable discussion on the subject of whether or not K-pop was socially or politically aware.  Intelligent and sound responses were made all around, but what stuck out at me was the idea (as presented by Patricia) that K-pop fans have developed a 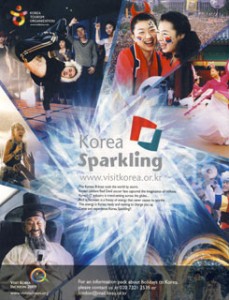 sort of fantastical and idealized perception of Korea, visualizing it as a “where every street is a scene straight out of Boys Over Flowers, where every person on the street is as good-looking as Lee Minho and Yoona, where you can eat all the bibimbap you want and still be as thin as a pipe.”  In other words, the fact that many K-pop fans have developed a rather shallow image of Korea based on K-pop is difficult to deny (and I’ve only just learned what the term “Koreaboo” means). However, for as many international K-pop fans think of Korea as a glittery and sunshine-y place where bad things never happen, there is a substantial portion of the fan base that has taken their love and appreciation of K-pop to the next level by starting to learn Korean.

I myself have spent the past 3.5 years hacking away at Korean, and as much as I’d like to pretend that my current academic interest in Korean history and politics was what led me to take the plunge, the not-so-secret truth is that my iPod had a fairly extensive K-pop playlist before I ever set foot in the classroom.  So influential was K-pop in my decision to study Korean that I will likely never forget (or abandon) my obsession with Super Junior‘s “Don’t Don,” which was the first K-pop song that I ever heard (and a song that dominated my Top 25 with over 200 plays in a few short weeks).  A year after I began taking Korean at my American university, I decided to spend a summer in Seoul studying at Sogang University’s Korean Language Education Center – and I haven’t looked back since then.  My obsession with K-pop grew alongside my growing passion for the language and the culture, and it is now difficult (if not impossible) for me to separate my academic, personal, and professional interest in all things Korea-related. 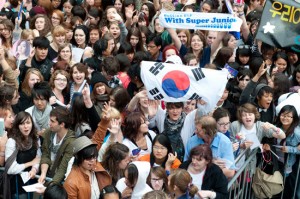 Though K-pop is largely superficial and hardly representative of Korea itself, the influence that it has had on the growing number of students across the globe who are now studying Korean is impossible to ignore.  So many of the Korean language students I encountered both in the US and Korea were driven by the desire to engage with K-pop and K-dramas on a deeper level – and in turn, such students are driving up the demand, especially in Korea, for Korean language programs that cater to non-native speakers.  21 years ago, Sogang University’s program employed just six teachers; today, it manages a staff of over fifty language instructors (hired at a ratio of roughly 100 applicants: 1 position) who have taught Korean to over 10,000 students.  It is difficult to imagine such growth without the global spread of K-pop.

Of course, embarking on language study is no small feat, and one can’t deny that there is a fairly high risk of disillusionment that comes along with studying Korean simply for the sake of K-pop; Korean is a difficult language, and studying in Korea is not exactly cheap.  A number of girls that I met in Korea were hopeful that a year or so of intensive study would enable them to listen to K-pop and watch dramas without the use of pedagogical aids or subtitles — and to be honest, this idea is just as fantastical as the image that many K-pop fans have of Korea. And I’m sure they were disappointed.

But even if your understanding remains imperfect, K-pop can and does provide a ridiculously helpful way to practice your listening and pronunciation.  If you can manage to memorize lyrics (which, if you are obsessed with karaoke, or noraebang, is likely to happen), then they can serve as a template for remembering certain words or grammar patterns.  Additionally, a lot of K-pop idols have their fingers in dozens of different pies in the entertainment industry — meaning that your favorite stars will probably show up on variety shows or specialized programs, which can provide additional listening practice along with visual aids and Korean subtitles to help.  In a lot of cases, K-pop provides not only the initial boost to start learning Korean, but remains a constant companion on the journey.

One thing that I particularly look forward to seeing is where Korean language students will be in a few decades.  As Maddie pointed out in the roundtable discussion, K-pop can and does often lead to a deeper interest in Korea itself, and such interest can lend itself to involvement in Korean history, politics, economics, and academia.  Shortly after I began studying Korean, I remember feeling discouraged that so few students cared about Korea beyond their interest in K-pop, but now I’ve learned to embrace K-pop as an all-important and pervasive stepping stone.  Though K-pop may be the initial draw, it has the potential to open students up to (excuse the cliche) a whole new world.  Passion for K-pop can translate into passion for much, much more — and so I am more than happy to encourage fans of K-pop to look at their interest in the fandom not only as a fun diversion, but the potential to be something to which they want to devote their life.

KARA‘s recently released Korean-Japanese tutorial app for smartphones is indicative of the fact that the K-pop industry is aware of and willing to capitalize on the fact that K-pop and hallyu have led to an increased interest in Korean language study.  While I admit that the decision to target the Japanese market is a smart one, I think that a similar app designed for English speakers would be an excellent idea — particularly given the fact that the US market is one that many entertainment companies are currently eyeing hungrily.  University-run Korean language programs are growing with each passing year, and I see no reason why the K-pop industry shouldn’t capitalize on the fact that this is largely due to K-pop itself.

What do you say, readers?  Has anyone started studying Korean because of his/her love of K-pop?