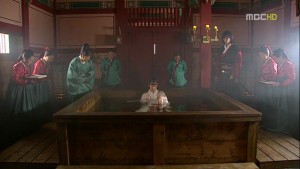 We say good bye to January with a K-pop rookie throwdown, Song Ji-hyo proves once again why she’s the queen on Running Man, Bora does ugly a little too good on Invincible Youth, MBLAQ gets a rude awakening on Hello Baby, Se7en collaborated with JYP for his new song, BEAST Knows It, Brian was Reborn, What’s Up gets a two epsiode extension (I think, as the follow up drama to it, For the Emperor starring Yun Jung-hoon, debuts on 2/11– I was about to have a $#!@ fit if it ended like that), and did Joseon Kings really take a baths in clothes?  Where are Kim Soo-hyun‘s royal abs!  These are the 5 Things that happened this week in K-pop that I thought were a bit more special than the rest.

5. Taemin Immortal At Least Once

SHINee‘s maknae made his debut on Immortal Song 2 singing Song Chang Sik‘s “At Least Once.”  He doesn’t have a strong and show-stopping voice like some, but he has a nice soothing tone and he gave an admirable performance.  Taemin impressed me.

SME really needs to step up their Promotions department because I would have to say they killed the anticipation for Exo Planet with the teasers, etc. it was almost enough to make you not want to see what all the hub bub was about.  Luckily, I stuck it out and found them to be pretty good.  So far I’m not liking them more than the other rookies that debuted this week, but they’re not bad.  It’ll take their live performance to seal the deal for me.  I really dislike the formula–an exact replica of K for M even for the MVs.  I feel like they’re ripping off fans, but hey if it works, more power to them.

3. Mir just might be the cutest baby on Hello Baby Season 5

Mir was probably the member of MBLAQ that I knew the least, but after watching the past couple episodes of Hello Baby Season 5, he just might be my fave member.  As a fellow fan of mangas/manhwas, I totally feel Mir’s pain here.

And Mir was just tooo precious in the pool to not include this clip, too.

Truthfully, I was totally not impressed with all of B.A.P.‘s promotional hype leading up to their debut. Although I’m a fan of Bang Yong-gook’s voice and rapping, I had serious doubts. I have to say I haven’t been this impressed with a rookie’s debut since INFINITE.  I thought the song, choreo, styling,  MV, and live performances while not perfect, were all solid.

1. The Moon That Embraces The Sun continues to Impress

I’m not totally sold on Han Ga-in yet–not because of her acting because I think she’s doing well, but because even though she’s gorgeous and looks younger than her real age she still looks older than the rest of the cast (Kim Soo-hyun, Jung Il-woo, Yoon Seung-ah, etc.) although Yeon-woo/Wol should be younger than King Lee Hwon and Prince Yang-myung (the actor they got for the adult Yeom looks older, too).