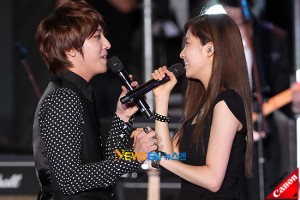 For some idols, and even some fans like myself, being on We Got Married with an idol of the opposite sex would be a dream come true. Imagine, pretending to be in a public relationship, buying couple clothing, feeding each other, taking expense paid trips, even having kids that  weren’t your own–indeed, what a dream it would be.

We Got Married has been a highly successful show on MBC for three seasons now, and has featured plenty of idols and variety talents alike. I know I watch the show religiously, and sometimes it feels I like practically worship the artificial couples that star on the show simply because it’s fun to see idols out of their typical element and trying their hand at the simple life.

But why, I often wonder, is there a variety show, full of idols I might add, that propagates the very taboo the music and entertainment industries discourage? The ever forbidden relationship between idols is made light of on WGM, but in reality, isn’t being in a relationship while being in entertainment one of the hardest things there is to do?

What sparked my vested interest in the topic came about when SNSD’s resident maknae Seohyun admitted on a recent episode of KBS’s Happy Together that she never had true, romantic feelings for C.N. Blue’s Yonghwa (her former WGM partner). Okay, obviously I knew this couple wasn’t actually real; I mean, Seohyun never really was intimate with Yonghwa until like the very last episode (if you call hand holding and half-hugging intimate, seriously this couple did not get far).

Most of us who watch WGM figure that these couples are not real off-air and that they are most likely to never actually be real since they’ve been on WGM; yet  I thrive on that inkling of hope that the couples really do secretly love each other. But watching Seohyun deliver the verdict so nonchalantly on Happy Together got me thinking–if she didn’t give a damn, then why did I? How was it that I fell in love with the Sweet Potato couple when the individuals involved didn’t even think the other as more than a friend?

WGM sets us up to believe in every indication that its onscreen couples are as real as they can be. What with couple missions and matching attire and ring exchanges, houses with one bed and sexy wedding photo shoots, the romance is practically force-fed to viewers! It would be odd if we didn’t ever wonder if the ‘married’ couples we watched on the show felt more something more than friendship for their partner. But what’s odd about WGM is that the moment romance doesn’t need to implicated by the show and skinship becomes natural between a couple,  WGM puts an end to the couple. And while that is still speculation, I couldn’t help but notice it was a trend that developed to be increasingly noticeable in the later 2 seasons. 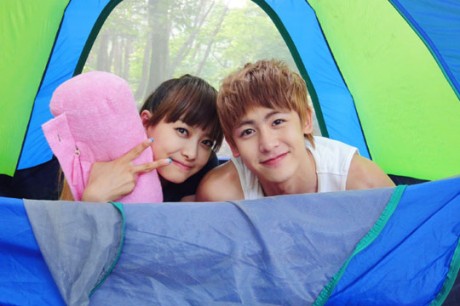 For example, 2PM’s Nichkhun and f(x)’s Victoria were a very naturally intimate couple, starting off shy and slowly growing fond of each other as the season progressed. They also became especially close in some of their later episodes. The KhunToria couple matched so perfectly that I was almost certain they genuinely cared a lot for each other, but when the going got great, WGM ended them.

While I love watching We Got Married, I may never understand the thought process that went on in the development of the show. And I won’t say cruel, because it’s really not, but it is a bit mean to pair idols together, let them develop a close relationship, and then shuck them apart when they get ‘dangerously’ close. Nor will I understand why the show exists if relationships are the number one thing entertainment companies don’t want for their idols. Bear in mind, though, that I’m not trying to convince to not watch the show or to hate whoever made it; I mean I watch the show day in and day out sometimes, that’s how much I love it. But even for a rabid WGM fan like myself, it’s important to remember that artificiality is the name of the game.