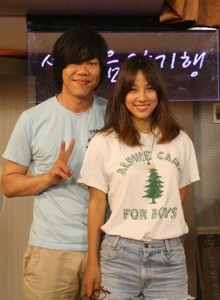 I wasn’t always completely sold on Lee Hyori as a person. Sure, I recognized that she’s just about the most gorgeous woman ever, and I appreciate her looks even more in a sea of identical, stick-thin, milky-skinned idol singers playing at being sexy but only ending up looking like  little girls. I was also faintly in awe of the fact that she kissed the one and only T.O.P and lived to tell the tale. I didn’t particularly like her music or her performances, though. In my opinion, “Chitty Chitty Bang Bang” was a weak GaGa imitator, and while “U Go Girl” was totally my jam for about two months, her performances let me down. About fourty percent of the people that I know in real life became Hyori’s undying fan because of her down-to-earth attitude in Family Outing, but I never did have the patience for variety shows, so I never fell madly in love with her personality.

Following all of that, there was that unfortunate plagiarism scandal. While the poor woman probably had little control over that situation, and most of the control was with the production house and the producer, it didn’t do much to raise her esteem in my eyes. She has made a few brave attempts to advocate animal rights in a hardcore meat-eating country, and even let a little air out of the mighty meat industry itself as a promoter, but her track record concerning these issues has been uneven. I understand that it’s unfair of me to judge her for uneveness in her animal rights advocacy when she never really presented herself as a powerful advocate in the first place, only as a person with heart. But  it didn’t impress me much, either.

In recent times, though, the tables have turned. This girl must have a heart of gold, and I can’t express how much I respect her now. What fired this new respect? Something rather simple, actually. She announced that she’s in a relationship. Oh yeah, you’re probably scoffing. Ooh, she got a boyfriend! What a brave soul! The difference between her and most other people in this world hooking up and getting a boyfriend, though, is that she’s in the public eye. Not only is she in the public eye, she’s in the public eye in the South Korean idol industry, where announcing to the world that you have a relationship is announcing your deathwish. Granted, Hyori is a little older than your average idol, and her fanbase is a little different. That means far less fanboys and fangirls still in diapers and willing to skip school to follow her to the convenience store to take pictures of her buying tampons. Still, though, her slightly more forgiving fanbase doesn’t change the fact that the eagle eyes of netizens are still upon her, and ready to make judgements about her and her boyfriend.

The boyfriend in question, now subjected to the ire of the internet, is Lee Sang-soon. The man is not an idol. He is not an actor. Were I to see him on the streets, he would be a perfectly good looking man, but the fact of the matter is that he does not slot into the category of bland square-jawed celebrity hot items. And did you really expect the netizens not to notice this? There has been a certain amount of negative reactions, wondering how he managed to snag the sexy queen Lee Hyori. Lee Hyori, bless her heart, did not take to the internet with an incohorent, enraged rant as most people would have. Instead, she left a rather lovely little tidbit on her Twitter:

Oh, Hyori.  Celebrities will never be able to escape criticism. Had she dated another bland, square-jawed celebrity hot item, there would have been a ninety-nine percent chance of frustrated fangirls complaining “That slut is taking advantage of my oppa!” And now that she’s dating a more normal looking guy, people are making him out to be ugly and speculating on hidden motives. But does Lee Hyori let that affect her? No. She instead puts up a lovely, inspiring message and then goes on with life. Lee Hyori, I salute you.

What do you think of Lee Hyori’s relationship with Lee Sang-soon? Do you think that public reaction toward celebrity relationships is slowly moving in a more positive direction?