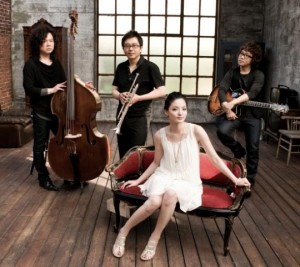 This week’s K-pop Indie Gem was another suggestion from a Seoulbeats’ viewer  and I’d just like to say, I am so glad for the recommendation! The band is, Winterplay.  They decided on the name Winterplay because as a group interested in Jazz, they noticed that all jazz artists tend to drift off the grid with little work during winter, so they decided to create a fusion jazz ‘project group’ called Winterplay back in 2008.  They would then play during the winter with their blend of jazz and pop when all the other Jazz artists tend to take a break. The ‘project’ was a hit so the group stayed together.

Winterplay consist of 4 members: Lee Ju-han (Trumpet & Leader), Moon Hye-won (Vocals), Soh Eun-gyu (Contrabass), and Choi Woo-joon (Guitar).  Unlike the other bands that we introduced, this band is fairly new. The band released their debut album Choco Snowball in 2008, and have made a name for themselves in only three years–which is impressive for an K-indie band. Here’s the title song off of their debut album called, “Melon Man” to give you an idea of their music.

Their popularity began to rise with the inclusion of their songs as the main theme in the 2008 K-drama Who Are You starring Yoon Kye-sang, Go Ah-ra, and Kang Nam-gil.  Check out the song “Who Are You” from the soundtrack.

They also gained a lot of popularity for the song “Happy Bubble” which was reworked for a Samsung Hauzen washing machine CF starring actress Han Ga-in.

No word on when a new album will be released, but they recently sold out their solo concert Winter Wonderland which was held on December 16th in Seoul, Korea.

Winterplay is also known for their awesome remakes of classics like Michael Jackson‘s “Billie Jean” and “Quando, Quando, Quando” made famous by Engelbert Humperdinck. Currently, they have 2 major albums, 2 mini albums, and 1 summer album out and they are all really great.  I definitely recommend that you check Winterplay out. They made it into my K-Pop Indie playlist, are they going to make it on yours?

Thanks again for the suggestions! And keep it coming because we love to hear from you guys!