On December 24 the 2011 KBS Entertainment Awards Show was held to honor those who those who work on variety shows for the KBS Network.  The attire that evening showed off two prevalent trends, as there was quite a bit of fur and huge variety of red-hot dress.  Lets take a look at some of the looks from both the red carpet and the stage. 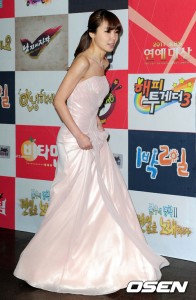 Hwang Jung-min and Tae Jin-ah, the Male and Female winners of the Radio DJ Award lent a bit of old school Hollywood glamour to the event.  She walked the red carpet in a slinky satin gown and cozy fur, while he looked dapper in an all white tuxedo.  Shin Bora won big, snagging the Excellance Award for Comedy for her work on Gag Concert, and she looked lovely in her pale pink gown.  Jung Kyung-min’s puffy baby-doll dress was not a favorite look for the evening, and would have looked better on someone much younger, like IU.  Regardless of the fashion miss, she still won the High Excellance Award for Comedy.  Rainbow rapper and Invincible Youth 2 cast member Woori had another one of the evening’s misses.  The glittery pin-stripe jumpsuit would be perfect if the awkwardly placed fur had been left at home.  The Nation’s MC Yoo Jae-suk and his Happy Together 3 co-host Shin Bong-sun made a perfect pair, and she was one of the highlights of the evening in her dark red mini-dress and glittering pumps.  The best red carpet pose came from a trio of funny women from Gag Concert: Jang Do-yeon, Park Na-rae and Heo An-na.  It is shots like these that remind you who this ceremony is for! 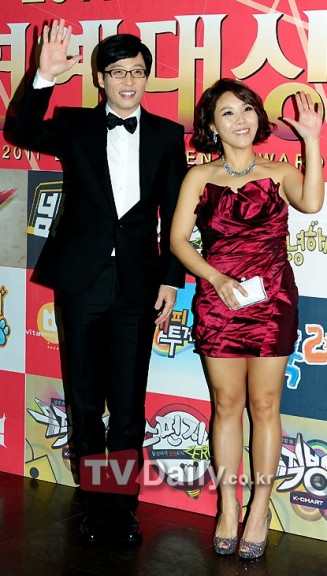 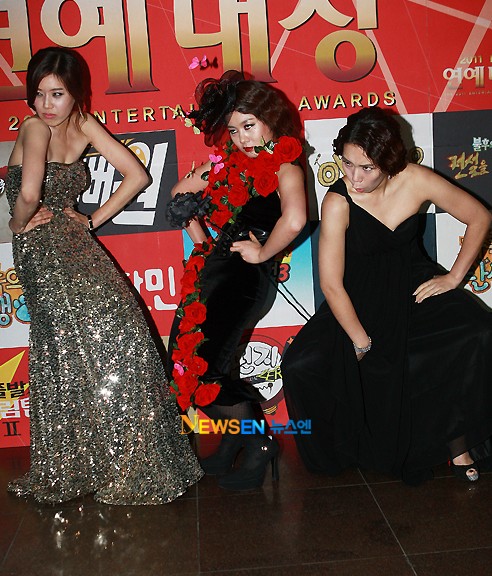 Up on stage, Yoona and Lee Ji-ae were serving as MCs for the evening (along with Shin Dong-yup) which gave them a chance to show off not one, but two looks each!  Unfortunately, each woman had a hit and a miss.  For Yoona, her pale dress worn at the opening of the show was pretty, yet boring, practically blending in with her skin.  The soft blue gown she donned to close out the show, however, was gorgeous.  Announcer Lee Ji-ae’s first frock was simply hideous.  The sheer sleeves and off-the-shoulder fringe did not go well with the rest of the dress, which looked like heavy upholstery in comparison.  Her second gown was a stunningly sleek red number that was another one of the top looks for the night. 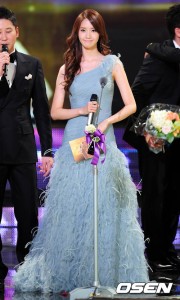 Another lady in red this evening was Variety Rookie Award winner, Park Eun-young.  The dress is one that evokes somewhat conflicting feelings.  It looks very interesting and intricate in one moment, and then you half expect Nemo to swim out sea anemone-like front of her dress.  Overall, the dress is overwhelming.  There was a contingent of K-pop representatives that presented at this years awards, and they definitely did not disappoint when it came to their dress selections.  Uee worked her vibrant pink mini-dress and matching lipstick, while Yuri looked like the queen of prom on Lee Seung-gi’s arm.  IU looked cute as usual in another one of the night’s red looks. 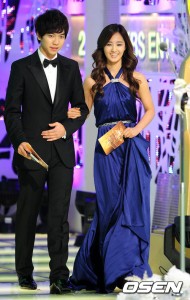 Who’s look did you love at these awards?  Do you have a favorite variety performer in Korean entertainment?