"War of Arrows," a good mix of drama and comedy

War of the Arrows, written and directed by Kim Han Min, is a South Korean historical action film depicting the Manchu occupation of Korea. This movie was the first to be screened at the London Korean Film festival and was sold out completely with people clamouring for good seats, although SHINee’s appearance definitely had something to do with that. 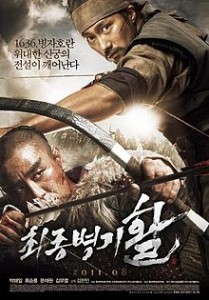 The movie takes place during the second Manchu invasion of Korea in 1636 and focuses on an archer named Nam-Yi (Park Hae-il) and his sister Ja-In (Moon Chae-won). ‘Arrow’ immediately jumps into action; with the young Nam-Yi being thrust into adulthood after watching his father brutally murdered by Manchu soldiers. The acting by the two child actors in the roles of our leads was stellar. They were only on screen for about eight minutes, but they commanded the screen. The young girl who played Ja-In (Jeon Min-seo) was particularly captivating to watch.

War of the Arrows is a movie of two halves; the first half being about Nam-Yi still trying to come to terms with the death of his father and the fact that he wants to protect his sister from the world. His main beef is with having to hand his sister over to the cocky Seo-Goon (Kim Mu-Yeol) who wants to marry her. Nam-Yi leaves the village during Ja-In’s wedding and at the same time soldiers invade, slaughter and capture the villagers.

Once Nam-Yi finds out they have taken his sister as a slave, the movie turns into a sweet revenge film. From this moment we are blessed with beautiful visual effects of the arrows piercing through the air in slow motion. The fight scenes had so much emotional context and never felt mindless.

Kim Han Min is a director who knows films. There is one scene that I call ‘the quivering arrow’, where Nam-Yi is practicing his archery in the woods and as he goes to retrieve one embedded in a tree he notices the rhythm the arrow is moving in. At the same time during the badly timed wedding they notice the water in the drinking glass moving. This of course is a technique that was popularised by Steven Spielberg’s ‘Jurassic Park’. 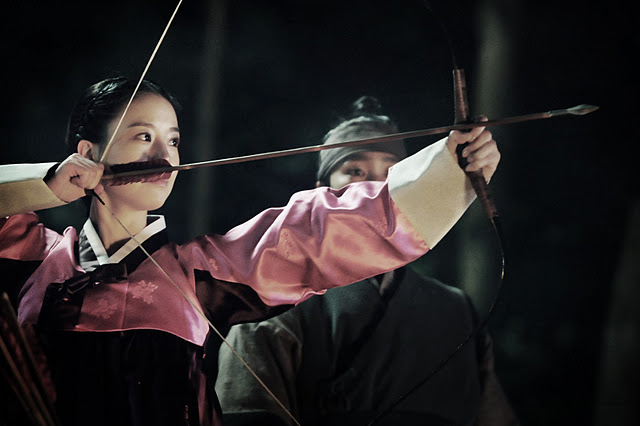 War of the Arrows also managed to pull off the perfect mix between serious drama and comedy, which is a Korean movie convention in many ways. For me, it worked well as I never felt that the jokes were out of place.

The bad guys, the Manchurians, were realistic and seemed human. They care about each member of their squadron so it carried extra weight when you saw the surviving members acting particularly crazy or inhumane towards the Korean villagers.

This movie had such a positive female role in Ja-In. This was a woman who had seen so many of her people slaughtered but still managed to retain humility. At the same time she was so resilient and didn’t stop trying to kill her detainers and that resonated well for me. Ja-In looked death in the face many times and just kept going back until she got results.

Overall, I really enjoyed this movie and it kept me guessing all the way until the end. For western audiences I would describe it as a revenge movie, but for Koreans it would also be a feel-good movie as it shows how a small village managed to overcome such adversity during one of the darkest periods in their history.