2011 MAMA's Music: Who Dazzled and Who Fizzled 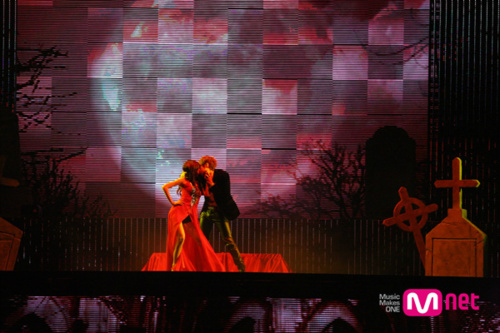 The 2011 Mnet Asian Music Awards Show has come and gone, but it has left us with plenty of opinions in it wake. This star-studded event, which lasted several hours (for most of which I should’ve been sleeping but I was instead streaming the show live teehee) included performances from a wealth of all of our beloved K-Pop acts, as well as performances by the Superstar K3 Winners and Chinese and Japanese artists. Oh, and not to forget Black Eyes Peas’ Will.i.am and Apl.de.ap, Dr. Dre, and Snoop Dogg.

So random. Anyways, let take a look at who really brought out the glitz and who fell flat during their performances for the 2011 MAMA’s in Singapore.

To kick off this auspicious event, YB, Simon D, and Dynamic Duo came together to get the crowd going.

This performance was amped with high energy and charisma. Differentiated with a violin, live band, and expert rapping, it made for a fun start to the evening. Moving on to the meat….

Next we have Chinese pianist Lang Lang at the chords and Beast at the vocals performing an orchestra version of Fiction. Cube Entertainment‘s latest sub-unit Trouble Maker also gave audiences a small peek at their raunchy antics during the middle of song.

Dear lord, this was PHENOMENAL. All the Beast boys harmonized superbly. Throughout the entire performance, they maintained a sleek sexy, bad boy charisma that had me drooling, especially when Dongwoon hit those high notes as Junhyung delivered that hard hitting rap closer to the end of the song. I also appreciated the fact how a majority of the stage was vocals–it really showed of Beast in this way I’ve never seen before. The orchestrated Fiction was a fabulous pick for the occasion. Plus Hyuna and Hyunseung right in the middle of it, getting all handsy was pretty hot and I think it was all the heavy-duty choreo the performance needed. Overall, Beast nailed this stage. Good job boys.

Alrighty, next is Miss A and their martial arts-inspired performance of Goodbye Baby, Goodbye.

Jia started off with a showcase of angst and opened the song alongside a team of dancers who incorporated the use of long sticks to emphasize her movements. I thought it was clever, and she killed her 15 seconds of fame under the spotlight alone. The rest of the girls entered and made use of Chinese fans to create fluttery and almost whimsical movements that contrasted  with the harder beats of the remixed song. Fei had a small hiccup when she dropped her fan, but she recovered nicely and went on to wow me with her spins. Min and Suzy bored me a little with their parts, but it was so short it hardly even mattered. When the girls came together, they really startred throwing punches and high-kicks, which was a cool idea, but the choreo started to get sloppy and out of sync. The song’s better points were definitely in the vocals, and all the girls performed at par. But special props to Jia–her charisma stood out the most and just lit up the stage more than the other members’. Overall it was a good performance — a little out of place here and there, but the concept came together nicely and the girls definitely put in the effort.

Wow, does this girl know how to work a stage. Koda Kumi delivered an electrifying performance with three of her best songs Ai no Uta, VIP, and Bling Bling Bling. She showed off her vocals and class with Ai no Uta, but quickly ditched her dress for a racy one-sy and an on-edge performance. This girl is the like the Britney of Japan, except she can actually sing. She dominated the stage as she rocked out to that choreography– her attitude is all over the place and its obvious why she’s such a successful female solo artist. It was actually kind of refreshing amidst all the K-pop to get some J-pop in the mix. My favorite part was her last song Bling Bling Bling. It was a lot of fun and you could really see Koda Kumi giving it her all in the last song. Props, girlfriend.

Okay, now let’s look at Hyun Joong. Oh Hyun Joong…it’s a damn good thing you’re beautiful son, because I have no idea why they still give you a microphone.

I never cared for the song Lucky Guy to begin with, but the performance was predictable and boring. It’s no secret Hyun Joong’s vocals are not that great, but come on, he could’ve at least won me over with a better stage. I appreciate the Grease-feel to the choreo, and I’ll admit, I love it when guys go get girls from the audience, like when he pulled up Suzy, but they didn’t even grind or get dirty–no excitement at all. It just seemed like a performance I have seen before, and needless to say I wasn’t impressed.

Now for some original hip-hop that could really put some K-pop acts to shame, Dr. Dre and Snoop Dogg.

I was super excited for these two. I mean, hip-hop is my music and Snoop and Dr. Dre killed the stage like they usually do with their polished skills. All the idols on the side looked like they were having fun, and I’m sure it was cool experience even for them as I’m sure a lot of K-pop rappers look up to legends like Snoop Dogg and Dr. Dre. I chuckled here and there because it did seem like Beats promotional gig, but I loved the guest appearance all the same.

Now, the one and only SNSD.

I don’t know how I felt about this performance. Now before everyone takes their knives out, hear me out. The girls looked HOT. I mean, I’ve never, ever seen them look as stunning as they did that night. But this performance had me asking “Is it over yet?” The intro was too long and I ended up skipping through most of it. The performance of the original song was bland and boring, like something I would expect to see on a weekly appearance at an average music show. When the tempo increased, I did pay more attention, but I wish they matched the beats to sharper choreography to really make me excited. The only part I loved, and I actually really did love this, was the last minute or so fo the performance where this sexy remix of the song comes through and the girls break into harder, faster choreography. I also loved how they made use of their triplet formations– it’s very unique to them and it was nice to see them make use of it. Had the rest of performance been as fast-paced or at least as different as the conclusion of the stage, it would’ve made for a more captivating performance overall. I was disappointed.

Next up from the SM family is Super Junior with Mr.Simple and Sorry, Sorry.

WOOT SJ! I suddenly remember why you guys are so popular despite you similar sounding, super-autotuned songs! These guys KILLED their stage. They had a tense, climactic intro that played into Eunhyuk opening with a rap (so glad he’s finally growing into that awful blond hair…it used to be worse, right?) and the rest of the boy enter and crowding the stage. They had great presence and, of course, great moves and it was a lot of fun to watch them. Everyone was in sync and hitting the live vocals superbly, especially Yesung. The use of the doors on the stage to enter into Mr. Simple was my favorite part– great use of props and it was kind of sassy in this bad boy way. I kind of felt like SNSD got a little duped–their stage was much less intricate, like someone in SM was paying way more attention to Super Junior when putting their stage together, but what’re you gonna do. Loved, loved, loved it SJ. My favorite of the night.

And last, but certainly not least, the ‘baddest females’, 2NE1.

This was an extraordinary stage. I loved how the girls were in cases singing Lonely in the midst of a light show (which was a little much at some points…). It was actually very beautiful they way it was constructed, and all the ladies sounded amazing on the microphone. Special props to Bom for pulling through with amazing vocal performance despite her serious flu. I loved the segway into I Am the Best–the glass shattering really set up the drama for the song. CL also really owned the mic in I Am the Best– the girl looks like she was born to be on stage. Minzy sounded exceptionally good, and Dara, was well… she had her hair going on. All the girls had great energy, both giving it and feeding of it from the crowd. The remix of the song in my opinion was fabulous. Oh and I seriously LOL’ed when they panned over the other idols watching and Eunhyuk was jamming out by himself in the corner. 2NE1, you guys truly dazzled.

Thanks for staying with me. There were a lot of performances, and these were just a few of the highlights of the whole event. Overall, the 2011 MAMA’s were spectacular, and even more exciting if you were streaming it live. Be sure to check out the performances and give your feedback, and keep your eyes peeled for the rest of the MAMA commentary to come!