X-Factor USA has not only already bested the UK edition with its sheer talent, but they also win for pushing the boat out in terms of the group categories. For anyone not aware, X-Factor is the newest Simon Cowell heralded show that attempts to find talent from a different source as opposed to the solo route that American Idol has always taken.

One group that has everyone talking is the ten-member group aptly named InTENsity. The group members age range from 13-17 and feature a mixture of boys and girls from various ethnic backgrounds. This group signals two important factors in relation to K-pop: groups are back and pop music is making a proper comeback. 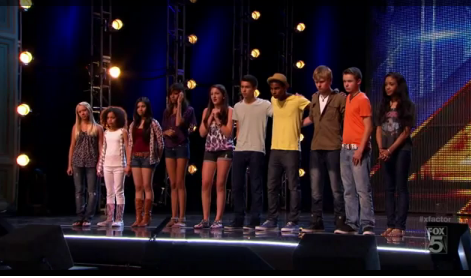 What struck me about this group is the sheer timing of their formation. As Girls’ Generation prepares to break into the American market there is much discussion of whether America will accept a group with so many members.

The truth is some of the best American groups have had many members, Earth Wind and Fire had nine members-but each member had a function as they were a band. This is where InTENsity might stumble, as they resemble a glee club more than a cohesive group. SNSD have synchronicity going for them and that alone could easily be their ‘shtick’ as they move as one big unit.

Paula Abdul (who is mentoring InTENsity) commented on how unique each member is and of course this will lead to a memorable image that will enable them to win-but it’s still a competition and anyone seen not pulling their weight will be inevitably cut from the group.

American music fans will tolerate a superfluous member of a group. They’ve always been there — from Tito Jackson (Jackson 5), Ronnie Devoe (New Edition) to Victoria Beckham (Spice Girls) — and there will always be a member that doesn’t do much but the difference with those aforementioned is that everyone else was strong and memorable. This is what SNSD and any other Kpop group that forays into the States will have to consider. Being quite frank, the average American won’t initially be able to tell each member apart from the other. SM will have to work overtime to make the unwilling audience care individually about each member the way fans do in Asia and other parts of the world.

Depending on how well InTENsity do in X-Factor, it’ll be a good sign of how Americans will receive SNSD’s debut, as the audience will become normalized to seeing an ensemble group with several members.