It is no secret to anyone in the kpop world that Jeremy Scott and 2NE1 have a mutual fashion love affair. The ladies have been rocking his looks since before their debut and Scott has even gone as far as calling CL one of his muses. A new collaboration between the designer and the quartet was announced last week, with the introduction of the “JS Collage Wings x 2NE1” sneakers, which will be available in Korea this November. The funky and flamboyant style of 2NE1 served as inspiration for the colorful take on Scott’s trademark winged shoes. 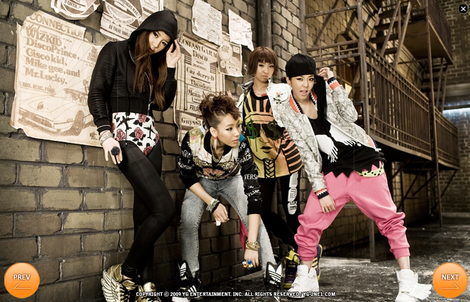 Jeremy Scott’s designs may not be everyone’s cup of tea, but 2NE1 has the attitude to pull off almost any of his looks. Here is a look at some of the hits and some of the misses their working relationship has presented.

At the 2010 Style Icon Awards, Minzy wore a mini-dress from Scott’s Hanger Appeal collection and while the stained-glass pattern matches her fiery hair, neither look good on her. The overall look ages the maknae, and the dress in general is more in line with Bom’s style. The smiley tank from the designer that she wore during a comeback performance worked much better for the singer, when paired with shiny leggings and a jacket covered in the Rolling Stones logo that gave her outfit an overall pop-art look that was much more age appropriate. 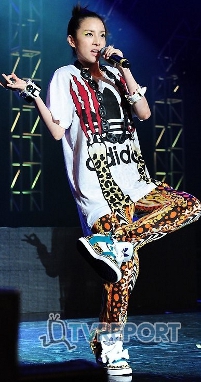 Dara is known for being the quirky member of 2NE1, but the look she sports on the cover of their Japanese version of “Go Away” needs to do just that. The offbeat orange sweater is from Scott’s latest collection Candy Flip, and she is also wearing the new collaboration shoes, but together with the multicolored pigtails, she comes off as trying to hard to live up to her image. The bold print of the JS Firebird trackpants, combined with the JS Bones shoes and baggy Paws t-shirt, all from Scott’s ObyO line for Adidas looked much more comfortable on the singer, while still showcasing her unique style.

The mini dress is by far Bom’s favorite fashion piece. She has worn a myriad of styles since the group’s debut, and it is no different when it comes to wearing Jeremy Scott. The combination of the JS Button dress and cropped jacket that she wore for a performance at the 2010 Style Icon Awards was not her best look, however, leaving her with a boxy appearance. The orange fringed dress from his Adidas ObyO line worked much better for the singer. The bright colors and fringe accents give the dress a playful flair, while the lace-up bustier look gives the dress shape that compliments her figure instead of hiding it.

It is no wonder that Jeremy Scott is inspired by kpop’s baddest female, CL. She has a charisma that helps her carry off almost any look he puts her in. From the edgier looks, like the jagged hem t-shirt and leather jacket from his Bone to be Wild collection that pair perfectly with her torn up jeans and fierce persona, to the elegant statement dress from Hanger Appeal that shows her feminine side, the singer shines.

What do you think of the new JS Collage Wings x 2NE1 sneakers? Do you have a favorite look from Jeremy Scott?