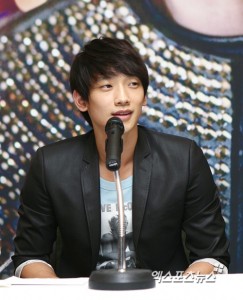 Super-global-megastar Rain will finally enter the military on October 11th.  Some K-pop fans, particularly the younger ones may consider Rain as an older, played-out act which isn’t uncommon with all the young blood running around. However, Rain has only been super-crazy-popular since about 2004. Really as much as we rip him for his attitude, his Engrish and his futile attempts at world domination, he really is the most visible K-pop artist in the U.S. You can thank Steven Colbert for that. And Time Magazine (and Clouds).

Which does give credence to his success. His fans’ steadfast resolution to get him on that list, reason be damned, caused confusion and curiosity amongst many Americans. But it also got his name and image out to the general populace, and Rain was game to take advantage of it.

Technically he has accomplished more overseas than anyone so far. He was one of the first K-pop singers to score hardcore Japanese fans, he’s had performances in Las Vegas, two mediocre movies, and hey, an MTV Award. I think at the end of his enlistment he could craft a decent career in movies, taking into account what his options would be.

Honestly, there’s a reason that they say “respect your elders” and with Rain there is much to admire. He has always come across to me as his own man, even when under the thumb of JYP. Now that he has his own company, he and the former manager are like equals. The pop idols of present have varying levels of talent, but there is still that invisible ball and chain.

That kind of independence and self confidence is not always  gotten easily, especially in the world of manufactured music – I would be surprised if 5% of the groups and singers we encounter today achieve the longevity and name recognition Rain has. He’s built a powerful brand unique to himself, and it would highly benefit any of the youngins’ to study him closely.

As another note on his career as a K-pop artist, I would say legend status (as a pop singer) is surpassed only by Shinwha in his success. His official fan count may have dropped some, but they are loyal, a quality Shinwha’s fans have in spades.

I also want to say (and prepare for the shock waves of sentimentality here) that as a K-pop fan that has spent about four years writing and learning, and immersing myself in this wonderful culture , I have Rain to thank for bringing me into it all.  Godspeed, Rain. I always thought you were hot before I knew about the double-eyelids.