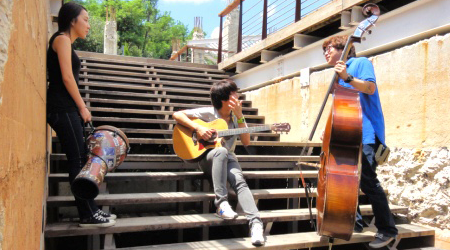 For almost a year I have been keeping my eye on K-Indie group Standing Egg and with each debut their new songs I am impressed each and every single time. Their Youtube channel has give those outside of Korea and chance to experience their great music. Their music is different from mainstream K-pop in that it has a Jason Mraz mellow quality, that fills you with warmth and happiness. Their music isn’t saturated with heavy beats and auto-tune, they are real musicians who play their instruments and write their own songs. They also have really nice and genuine vocals that add to the already top-notch music. Standing Egg is completely underrated and should be shared.

I actually hope they don’t break into the mainstream out of fear they will loose there originality and grass roots quality, while the are caught up in Korean entertainment industry where they can chew people up and spit them out. They don’t need to be changed they are no diamond in the rough they are already a huge shiny diamond. Every song they release I absolutely love because they have a real un-manufactured sound which is so rare in K-pop. Whats even more awesome is they write and produce songs for  guest musicians to be featured on their albums.  They are defiantly and group to keep your eye on.

One of my favorite songs Saranghanda Nuen Mal they just released and live performance video for at The Bridge. It’s a very awesome live performance. It really showcases their talents.

My absolute favorite song of theirs is Have you every fallen in Love. This song has a beautiful video and they song itself makes you want to go out and fall in love. It has a light quality that makes you fall into a dream. Standing egg is a gem in the k-pop industry and are what i like to call coffee shop going to the beach music. It’s really enjoyable music and they really need to stay on your radar. They are always active on their Facebook, Twitter, and their Youtube. Hopefully and brighter spotlight will be shown on these wonderful musicians in the future. Standing Egg is a 5 star group.