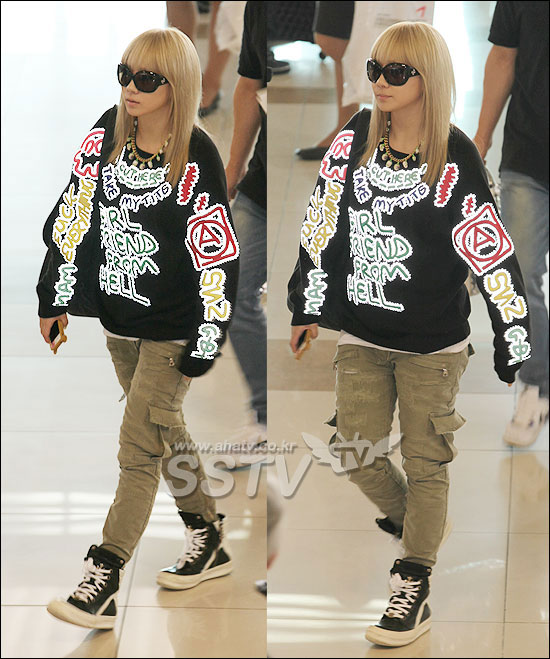 Korean culture is comparatively conservative and traditional; Korean pop culture however, has been making strides in the opposite direction. This aspect of Korean society has tried to incorporate an image that makes it seem more modern, more contemporary- which essentially is simply more provocative. For better or for worse, this is where Korea, like many other countries in Asia are at culturally: in a limbo between traditional cultural values and modern contemporary style. This limbo has recently come into the limelight following CL’s jump-start of the internet’s Richter scale.

In short, on a trip to Japan for mini-album promotions, CL was photographed wearing a sweater decorated with the phrases “fuck everything,” “cut here,” “take my tits,” and “girlfriend from hell.”

Would CL have worn this sweater if those very phrases were written in Korean’s Hangul?

Though I have no way of knowing, I’m going to go with a “no.”

And this isn’t the first time I’ve seen and/or heard an idol using certain phrases in English and wondered if they would use those very phrases had they been in their native Korean. Would CL have used the Korean equivalent of “hoes” and “bitch” in “Can’t Nobody”? Would G-Dragon have used the Korean equivalent of “motherfucking” in “Korean Dream”? Considering they didn’t, I’m, again, going to go with a “no.”

While a balance between the two is a romantic idea, the idea is not coming to fruition in Korea, as per the evidence provided by the baddest female herself. This tension is going to need to break and regardless of which end Korea’s culture ultimately evolves, it will be healthy for this culture to define its identity and values. Because in this state of confliction and perhaps even, confusion, Korea and it’s people will not know where they are as a culture, as a society, and as a people.