#plasticmaknae: Taemin has a new nose; fans are unhappy. Discuss. 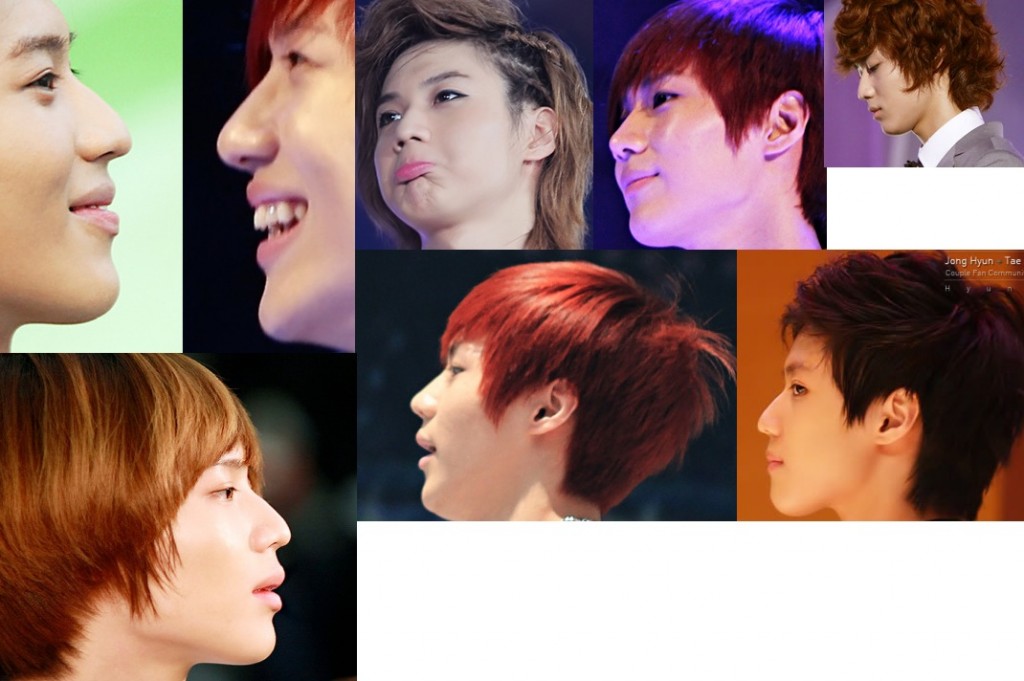 Let’s face it: plastic surgery is K-pop’s worst kept secret. Everyone gets it, no one admits to it, and ultimately, the only people who address the plastic surgery thing at face value are the fans – but only when they’re not busy defending themselves from the other fans who inevitably rush to counter any allegations that their favorite idols might not be 100 percent natural.

SNSD‘s Sooyoung attracted a bit of attention after she emerged last fall with a pointier chin and half her jawbone shaved off. Personally, I was a bit shocked – Sooyoung’s my favorite SNSD member and I thought she was already drop-dead gorgeous with her fuller jawline – but the rest of the K-pop world seemed to shrug it off on the reasoning that it was SNSD, and SNSD just isn’t SNSD without a few dips under the scalpel every now and then.

So imagine my surprise when news arose of Taemin and his new nose. The seventeen-year old SHINee member has recently garnered attention for being the new “face” of SHINee’s upcoming Japanese activities – but who knew that being the new face of SHINee entailed him getting a new face of his own, as well?

I’m exaggerating, of course – in fact, only a few eagle-eyed fans initially spotted the slight difference in the structure of Taemin’s nose, and compiled photo collages like the one below comparing Old Taemin-Nose with New Taemin-Nose. 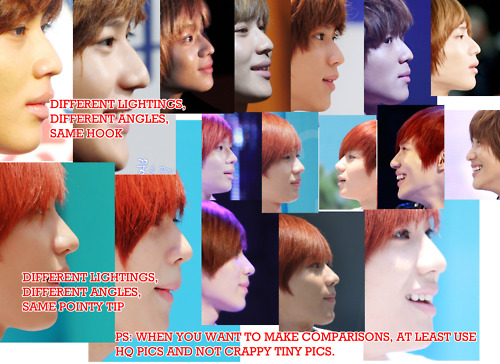 The difference is fairly slight, but you’ll notice that there was a small hook at the end of Old Taemin-nose. That hook is now gone with New Taemin-Nose, and the nasal septum now appears to be a bit lower on his face. Fans suspect that Taemin had the procedure done sometime between May 22nd and 26th, and seeing as he was still out and about between those times, many suspect that it was probably a quick fifteen minute thing done in a chair with a needle and very little fuss. Keepin’ on with the SM tradition of ruthless efficiency, I see. Good job.

To be honest, Taemin’s new nose itself isn’t really a huge deal – you have to really squint to see the differences between the two noses. And yet, these plastic surgery ‘rumors’ caused legions of fans to bare their claws in attempts to ‘protect’ Taemin from the evil, evil people who dared to simply point out the obvious. Opinions ranged from flat-out denial that Taemin had any work done at all, to SM secretly coercing Taemin to have the procedure, to theories that Taemin and Minho are now an official couple because of their matching fake noses.

Plastic surgery would seem like a hot topic in the Seoulbeats Universe where sane discussions about controversial K-pop and K-culture issues are welcomed. But in reality, the whole idea of plastic surgery in K-pop can be a rather uncomfortable subject simply because we, as spectators of K-pop, don’t really know what goes on behind the walls of the K-pop industry, much less what goes on in the minds and hearts of each K-celebrity as they decide whether or not to get plastic surgery. Ultimately, it’s not fair for us as a relatively uninformed audience to automatically assume that entertainment companies are forcing their artists to get plastic surgery, or that K-pop stars are all so obsessed with appearances that plastic surgery is their automatic go-to in order to feel better about themselves.

But it’s also not to say that the subject of plastic surgery should be completely closed off to discussion, either. This latest incident with Taemin’s new nose serves as a launching point for a whole bunch of questions in regards to plastic surgery amongst K-celebs. For one, is a seventeen year-old too young for plastic surgery? Does this say something about teenagers in the industry, and how their ways of thinking are affected by their environment? Do celebrities in big entertainment companies get procedures done because they feel that insecure about their appearances, or does the fact that they’re being financially supported by a large company give celebrities a “oh, why not?” outlook about cosmetic procedures? On the flip side, plastic surgery is considered a norm for Korean society on the whole, celeb or not. Do we, as a foreign audience, tend to pin plastic surgery on celeb culture simply because celebrities are more publicly visible, when in fact plastic surgery is just as commonplace outside of celebrity circles?

Or are you like me, who really couldn’t care less about idols getting work done as long as it looks good in the end? Personally, I think Taemin’s new nose looks fantastic from the side, but the frontal view still looks a bit funky to me (as seen in the first few frames of SHINee’s Japanese “Replay” video). But hey – if he likes it, then what’s the issue?