Fans love oppa, but oppa is uncomfortable with such feelings 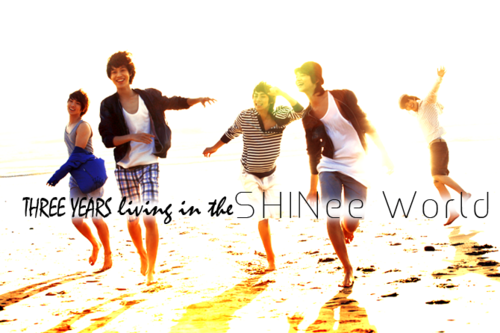 At the risk of sounding like a grumpy party pooper, I must admit that I’ve never understood the hype behind anniversary celebrations. I get the point of anniversaries, yes – it’s a day set aside to remember and re-appreciate something you love but may oftentimes take for granted. But what’s with the hullabaloo behind it all? Especially you, K-pop. What’s with the Twitter trending topics, the sentimental edited photos, the fan gifts, the long-winded, emotional soliloquies posted on Tumblr?

SHINee fans across the world are celebrating the 3rd anniversary of SHINee’s debut today, whether through Twitter hashtags, Tumblr photo edits, or a solo marathon of that really awkward Mnet reality show SHINee did in 2008. But funnily enough, the internet hasn’t blown up because of it, which is pretty uncharacteristic of K-pop as far as the internet is concerned. SHINee’s anniversary celebrations have been pretty quiet on the whole, with most of the celebrations confined to blog posts and strolls down Memory Lane. But if there’s a time where anything in K-pop can be associated with the world ‘quiet,’ it’s automatically a cause for celebration, right?

As a hater of birthdays, cruises, puppies, and happiness in general, I’ve come to find the emotional attachment that fans have to their idols to be a bit disconcerting. I’m not talking about horny, lovestruck fangirls who change their Facebook profile names to “Mrs. Kim Heechul” or declare their love to their favorite idol through menstrual blood letters. I’m talking about the emotional attachments that inspire fans to adopt phrases like “Always Keep The Faith” or “Prom15e to Bel13ve,” or prompt fans to write giant blog posts about how SS501 changed their lives, or how the “Soshi Bond” is what keeps them going every day.

Anniversaries are the perfect excuse for people to get all mushy and sentimental about their objects of affection, and there’s nothing fundamentally wrong with that. But there’s something really unsettling about these long, heartfelt open letters that seem to crop up all over the place on an idol group’s anniversary. Because – let’s face it guys, this is K-pop we’re talking about, and these are singers with whom we’re forming these deep, emotional attachments. And that’s risky business.

A few months ago, I wrote a two-part review to JYJ‘s Their Rooms, Our Story minialbum, and while I admit that the second half of my review may have been factually inaccurate at times (for which I apologize), I still stand by my belief that JYJ attempted to emotionally bait their fans into buying this album. I’m hesitant to question JYJ’s true intentions with the release of Their Rooms, but I think there is something to be said about the fans and their automatic willingness to buy a minialbum priced anywhere between $20-$40 (depending on the vendor) on the sole basis that this minialbum wasn’t just a minialbum – it was JYJ’s emotional outpouring to the fans. When JYJ was selling this minialbum, it was as if they were saying to their fans, “Here’s my heart. Will you take it?”

Look guys, this is coming from a former DBSK fangirl who, at one point in her fangirly life, was so emotionally attached to this group that she decorated her high school graduation cap with the DBSK members’ names and “Always Keep The Faith” in sparkly silver letters. The DBSK fandom is arguably the most emotionally tense K-pop fandom of our time, and having done my time in the pits of this fandom, I think there’s something to be said about my stance on the emotional toll that idol fandom takes on its devotees. That’s why I become so alarmed when I see these SHINee fans writing these intense emotional outpourings about how SHINee has changed their lives, or how much SHINee means to them. It breaks my heart to hear fans say that they turn to K-pop as a distraction for real life because their friends and family can’t offer them the same comfort that K-pop idols do.

And it breaks my heart even more to know that the K-pop idol industry actively encourages this behavior. You hear idols jokingly tell their fans to not ‘cheat’ on them, or say how they consider their fans as family, or how much their entire existence relies on their fans. And it’s true – at the end of the day, an idol’s entire career rides solely on their fans…and their pocketbooks. I don’t doubt Onew’s sincerity when he thanks Shawols every time they win an award, because it’s the Shawols who are the ones casting their votes for music show awards. It’s the Shawols who are boosting the group’s street cred, and it’s the Shawols who are helping SHINee to bring in profit. Conversely, fans take this message and misconstrue the idol’s financial reliance on the fans as an emotional reliance instead. It’s a one-sided relationship, and countless fans have invested their everything in this one-sided relationship.

An anniversary is a happy time, and it’s always nice to reminisce about SHINee’s rookie days and their journey to their current place in the industry. But these journeys down Memory Lane can oftentimes unveil a side of fans that is arguably more unhealthy than the usual craziness associated with K-pop fandom. At the end of the day, the strongest relationship between a fan and an idol should be financial and not emotional. The fan-idol relationship propagated by K-pop today is one that easily lends itself to emotional and financial manipulation – and that’s unfair to all parties involved.