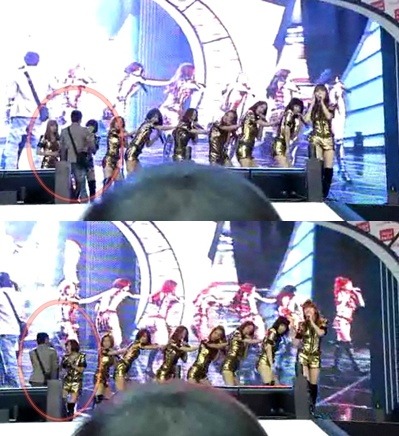 Wow, step away from Kpop for one day and all hell breaks loose.  Towards the ending of their performance of “Run Devil Run” at the Angel Price Music Festival on the 17th at Lotte World, a man walked onstage from the backstage headed straight for SNSD‘s leader Taeyeon grabbed her hand and proceeded to pull her off stage.  WTF…..?  Check out video of the incident.

Sunny and the concert’s MC Oh Jung-tae were the first to intercept the guy until security came and had to pull him off of Taeyeon.  Luckily other than causing a brief disturbance and scaring Taeyeon, the concert continued on with SNSD finishing up their performance.

Of course fans were appalled that some random (and most likely mentally unbalanced) man was able to get through security and grab Taeyeon and they have been lodging complaints against Coupang, who were in charge of the concert for Angel Price.  Coupang released a statement apologizing for the incident and offered full refunds to fans, Sones were not impressed.  The MC Oh Jung-tae however, has found newfound fame with Sones claiming him a hero for saving Taeyeon.

SM Entertainment has released a statement that SNSD are fine after the incident and that Taeyeon will not be pressing charges.  I know it’s not unusual for stars to not press charges in incidents like this, but I hope Taeyeon at least got a restraining order against the guy.  I mean he is clearly unbalanced in trying to ‘kidnap’ her right off the stage, but he was cunning enough to get backstage in the first place.  It’s incidents like this that makes one think if being a star is worth it.