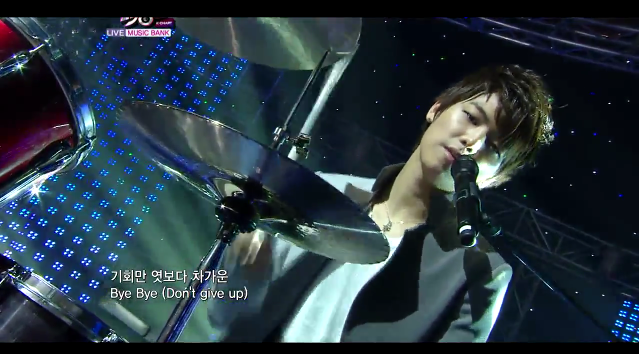 It’s old-school K-pop throwback week at MuBank, with veterans Brian Joo from Fly to the Sky and Tony Ahn from H.O.T. making their comebacks on today’s show. Rookie girl groups Rania and Brave Girls also made their MuBank debuts this week, while 4minute and Rainbow are returning to the K-pop scene with new singles. Now, without further ado:

Orange Caramel: “Bangkok City” – I really like this song, but these performances just aren’t doing it for me.

Brian Joo: “Loved But It’s Over Now”  – K-pop’s original diva is back, but what is that ring.

U-Kiss: “0330” – Love, love, love this song…but the choreography is giving me flashbacks of my middle school musical theatre days. Um.

Brave Girls: “So Sexy” – They’re just about as original as their name. Or their debut song title.

Brave Girls: “Do You Know” – This song is actually pretty good, but their singing…not so much. I’m getting a strong impression that these girls were picked more for their looks than their singing talent. Welp, welcome to K-pop.

Rainbow: “To Me” – Daaaang, these girls are getting better and better with every new release. I’m definitely keeping an eye on them.

Infinite: “Nothing’s Over” – Also popularly known as “Nothing Sober” by many international fans. I don’t think it’s their best song, but they get to showcase some of their best singing in this song, and I can definitely appreciate that.

4minute: “Heart To Heart” – I’m not a huge fan of this song, but this was a pretty impressive vocal showing.

4minute: “Mirror Mirror” – Now this is the 4minute I was looking for! Granted, this song doesn’t groove with me as well as I had hoped (the way they sing “거울아 거울아” sounds a little cumbersome and awkward) but I love watching these girls move. Also, Hyuna should always have black hair. That’s a rule.

CNBLUE: “Intuition” – It’s been a few weeks since their new album was released, but I’m still jamming to it. That’s a good sign.

K.Will: “My Heart Beating” – This song has the potential to be so fruity, but I love it nonetheless.

DBSK: “Before U Go” – I think this song is beginning to lose its charm. SM probably has some hookup with KBS mandating that DBSK performs last on MuBank, but at this point their performance comes off as being a little underwhelming. Also. we need to kill the mesh.

CNBLUE wins K-Chart, and are ridiculously adorable in doing so:

Other performances from this week:

Na Yoon-kwon: “I Smile Because Of You”