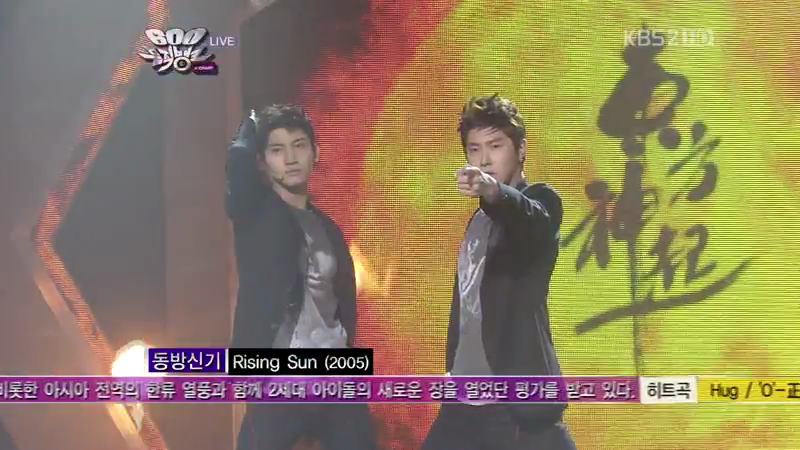 Whoooo, 600th MuBank episode! And you know what that means: special stages! While rookie groups X-5 and A-Pink make their debut and f(x) makes their comeback, DBSK performs a special version of their 2006 promotional single “Rising Sun” and hoobaes perform covers of their sunbae’s old songs. Weird to think that DBSK is now considered a “sunbae” artist now, right?

block.B: “Freeze” – Still a little messy in this live perf, but it’s not a bad song. And am I the only one getting weird Far East Movement vibes from this?

X-5: “Fantasy” and “The Show Is Over” – Oh, so that’s why they lip-synced in the fist song. Erm. This song has the potential to be really dynamic, but the singing just kinda kills it. Sorry. :/

Infinite: “Nothing’s Over” – I see what you did thar with the song titles, MuBank, putting this after the X-5 song. And man, could they look any fruitier with those blazers? Then again, it is Easter weekend…

Rainbow: “To Me” – Wow, their stylists are really starting to step it up. The members are wearing non-identical shirts this week!

A Pink: “Wishlist” – Can we please quit it with the “We’re young and innocent and demure” demeanor please? The first soloist’s body language was so eye-roll-worthy that…I can’t even.

A Pink: “I Don’t Know” – This is the group that’s supposed to succeed the epic fierceness of 4minute? I can tolerate and appreciate cute, but I don’t have the stomach for infantile. This is infantile.

Brave Girls: “Do You Know” – Again, KBS, trolling with the titles! Still finding it hard to find any talent-based merit in this group, but I love their outfits here.

Wheesung: “Can’t We” – A throwback to 2002, when this song launched Wheesung to where he stands now.

4minute: “Number One” – Awww, a BoA oldie! Not willing to make any comparisons between 4minute and the Reigning K-pop Queen, but I’ve always thought it was nice to see hoobae artists covering their sunbae’s songs whether or not they do them justice.

CNBLUE: “Dajim” – A cover of Jo Sung-mo’s 2000 hit. But what the eff was that ‘rap break,’ Jungshin? I’m feeling so much secondhand embarrassment but you’re just so cute that I think I’ll just let it go.

f(x): “Gangsta Boy” – This reminds me a lot of SHINee’s “Up And Down” – not because the songs are similar, but like “Up And Down,” “Gangsta Boy” is probably one of the most annoying songs on the album but it gets stuck in your head so easily so of course they use it as the opener to all their comeback perfs. In other news, f(x) is back yaaaaaaay!

f(x): “Danger” – Still not a fan of this song, but this translates so, so well to the stage that I can’t help but like it a little more because of it. Would it have killed them to make their choreography a little more complex, though?

Rainbow: “Sweety” – A cover of S#arp’s old songs. Call me an ignorant K-pop fan for asking this, but does anyone actually remember S#arp? Cute song, though.

CNBLUE: “Intuition (Rock version)” – I thought that their regular performances were all ‘rock versions,’ but apparently not. This is the super-duper rock version, where Yonghwa is rocking too hard to play his guitar.

4minute: “Mirror Mirror” – Still isn’t doing it for me. I really think it’s just the usage of the phrase “kyeo-ul-a kyeo-ul-a” as a hook that’s really bugging me.

DBSK: “Why? (Keep Your Head Down)” – Happy that Changmin brought his Mirotic-era hair back. Not too happy that they’re performing this song again (although it was a really great performance, admittedly)…

DBSK: “Rising Sun” – …but I’m also looking a big, pretty gift horse in its shiny mouth with this performance of DBSK’s classic song, “Rising Sun.” A bit heartbreaking to see them performing this song with three absent members, but I love this if only for its nostalgic value. I was the song that initially got me into DBSK. Laugh if you want, but it’s true. ;_;

Other performances from this week:

Lee Hyun (feat. Mighty Mouth): “Although You Said So”