Korea Brags About Its Global Takeover - Everywhere but in the U.S. 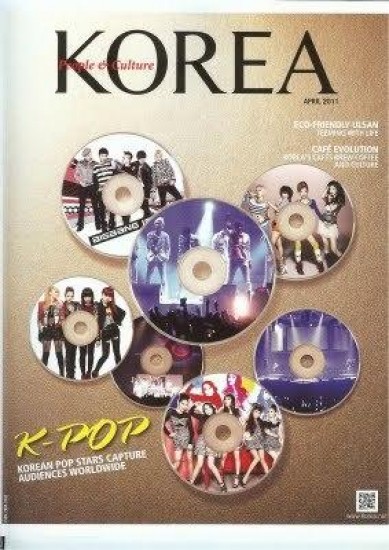 Guess who’s friendly neighborhood embassy had the latest copies of Korea: People and Culture? The magazine comes out once a month (and usually covers interesting topics – February’s was all about the Korea Starcraft obsession). However, I bet the editors are regretting not making April’s issue a five dollar special edition because who cares about traditional Chosun dynasty architecture when we have IDOLS! Idols, idols everywhere.

So many that they are the cover story of this month’s issue, which automatically makes it important and newsworthy for every Korean web site in cyberspace.

For me, well it’s not very often that you get to read in depth articles about a chosen foreign subject in your mother tongue. It’s kind of surreal actually, like the time Wonder Girls were on ‘So You Think You Can Dance.’ I don’t take kindly to throwing around the word “fob” (fresh-off-the-boat) but they definitely looked like fish out of water. Of course with time, that may have drastically changed by now.

Back to the topic at hand. I do like the idol-tastic cover chosen for the story – it’s eye catching and still finds that balance between bland and overkill. It’s like they took out all of the cringe-inducing, laser-light blinding, robotic choreography, wiped out all the  second-hand embarrassment and kind of made it…cool. I mean, cool to the masses. Regardless what anyone says, k-pop will always be cool to me.

Jeong Deok-hyeon pretty much got my dream assignment, because he was allowed to natter on about the “second Hallyu wave” for a good twelve pages or so. He does a satisfactory job, writing-wise; Jeong doesn’t cover what most die-hard fans don’t already know,as he devotes a considerable amount of copy space to the Korea-Japan connection, which I will never tire of hearing or reading about personally. There is some thoughtful analysis about past grievances between the two countries leading up to Japan’s current willing media consumption of all things Korea.

The entire article is based on  the emergence of a second “Korean Wave” which, depending on who you ask is… debatable. This is assuming the popularity of Korean media exports have been waning, when really, they have sustained a comfortable place in pop culture, at least in Asia.

There was a nice section on social media – with a Soompi.com shout-out! – that again, doesn’t mention anything thought-provoking about the role of social media in promoting k-pop or changing the landscape of promoting all music for that matter.

“K-pop has taken a leading role in the new Korean wave, largely because it’s content is so web-friendly…No longer limited to Japan, China or Southeast Asia, K-pop has seen its horizons expand to the rest of the world in real time…wherever there is Internet, the Korean wave has transcended racial barriers and reached international audiences.” – Jeong Deok-hyeon, Korean Magazine

It was well put-together however. I liked how the writer dubbed Youtube’s role in this as the “Youtube Silk Road” – haven’t heard that one before.

I found that the most interesting aspect of this section was the insinuation that Korean pop music as a whole has been utilizing social media to a greater extent than Westernized music media conglomerates, and thus, no apocalyptic breakdown of the music industry.  It didn’t merit much more than a brief side note, but I would appreciate an article delving deeper into that topic, if that idea in fact holds up.

My only real quibble with the piece was Jeong’s take on what is essentially JYP’s take on Americanization. Sure we sing along in Korean, but you know, we kind of have to – have you ever tried to get an English translation to make sense? James Turnbull has. I think a lot of people have fallen to JYP’s line of thinking as far as K-pop stars crossing over, but agree that most of us are fans because of what makes the music – and by extension the culture – unique. Drop U-KISS uncut into the current U.S. market and see how they fare. Come on, I dare you.

“Park Jin-young once said the words ‘Korean wave’ themselves are obstacles to the very movement they describe…Today international fans tend to be enamored with the Korean lyrics…some going as far as learning the Korean language…The new school of thought is that it’s better for Korean artists to stay true to themselves rather than trying to be American.”

It’s the age old conundrum of appealing to a new audience while retaining what makes you different- there must be a solution somewhere in the middle.

For me, the most interesting aspect of the article that should have been teased out more (or been the focal point) was bar none, K-pop’s popularity in South America and other countries and continents not named Asia.

Again, many K-pop fans are aware of  the surprising popularity of the genre in South American countries, but it’s not a widely known fact. It is interesting to note that that at least those in the music industry are taking note and going forward with strategic global action, but none as aggressive as in Japan. There are also other countries where you wouldn’t necessarily expect an influx of Korean pop fans, like Lithuania, Belgium, Mexico, Uzbekistan, any former Soviet countries really, and the Middle East. What is their attraction, how did the music spread to these areas in the first place? We get some details on the Soviet connection, but there is so much additional article fodder that I would do the research myself if, you know, I had money.  Impressively, this was timely enough for Jeong to cap it off with Big Bang’s album success in Canada and New Zealand.

“K-pop is creating a new Korean wave in almost real time…In the Middle East and South America, K-pop is only just breaking ground. The Korean wave road that K-pop is paving is delivering Korea’s culture to television sets all around the world.”

Jeong did hit the nail on the head as far as the internet being its own viable means of self-promotion.

Overall, it was decent for a hype article, with a nice summary of Korean music’s global impact thus far. Interesting though, that amongst all the success, America is still that unattainable diamond in the sky. Yes they’re dipping toes in and doing collaborations but I noticed the auspiciousness of America’s near absence among all this Global! Success! that I have to mention it,  though obviously you can’t  gloat about something you haven’t accomplished yet. Who knows, come June or July’s issue, we may all be singing a different tune.

You can get Korea magazine for free, by either signing up for mail delivery or direct download at Korea.net. Keep in mind though, that this month’s issue is not online as of yet.