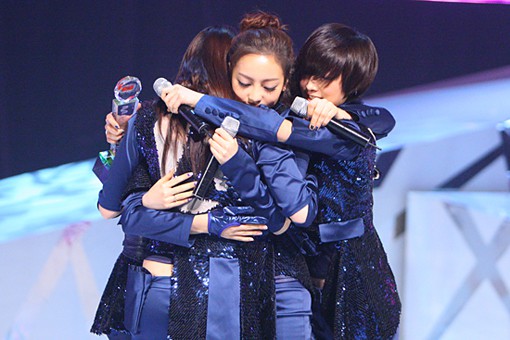 Things were not looking good for girl group KARA when members Nicole, Seungyeon, and Jiyoung launched a lawsuit against DSP Media months back. It was a nerve-wrecking period for fans, especially when the dispute dragged on over the year amidst KARA’s Japanese promotions with no sign of resolution.

But fans may heave a sigh of relief and move on from this hullabaloo-DSP Media revealed on April 28th that both parties have “reached a compromise where KARA will be able to continue their group activities”, having “amicably resolved the dispute”. The company also stated that they have had in-depth discussions about KARA’s future and managed to reach an agreement where the trio would not pursue a lawsuit any longer, without any conditions.

DSP Media then ended off saying, “We would like to thank the fans for supporting the girls, and promise to work hard to show improvement.”

The road to recovery started with the girls’ jacket photo-shoot in Japan, which marked the first time all 5 members were united after a month. It was said that the atmosphere had been okay despite some difficulties, and the members seemed like they would be able to continue on harmoniously together. The next step would be the shooting of their new music video, which will take place early May.

And on April 29th, DSP released the following press report:

“DSP Media and KARA have both been able to stand before our fans with a more mature and closer partnership than before. Although everything has been resolved, DSP Media would still like to apologize for causing concerns amongst KARA’s fans.

We acknowledge that we are forever in debt to you.

KARA will be returning when they feel that they are able to properly treat the wounds of their fans. We will be working our hardest to make sure that our fans can see that we’ve turned the past misfortune into our advantage.

We would like to take the opportunity to thank the various associations and entertainment/media representatives for sending us their support.”

What brought on this sudden compromise, though? According to Jiyoung’s father, who had spoken with the producers of SBS‘s “One Night in TV Entertainment“, the trio wanted to continue promoting but were unable to due to the dispute. After seeing how the 3 girls were suffering from emotional hardships throughout the lawsuit, the parents decided that it would be better for everyone to simply reach a resolution with DSP Media.

While there were disparities among the members, both parties shared what they could and “our compromise was something that satisfied all of us”.

KARA fans won’t have to worry about discord in the group. Regarding the members, Jiyoung’s father stated, “They all said that they’re okay. It will be awkward for a bit, but everything will be okay once time passes.”

It’s great to see how after a dispute, the agency and members can work to reach a resolution and succeed in finding a win-win solution to their disagreements. As long as both parties are willing to compromise, there should actually be no reason why such disputes cannot be resolved. While a lawsuit may not have been the friendliest or easiest way on the artiste’s part, maybe it serves as a reminder to companies that their artistes do have opinions and rights as well. Perhaps KARA’s case would bring some hope to fans of DBSK, who have been patiently awaiting the group’s reunion.