Throughout my K-pop journey, one thing I realize about male idol groups is how most of the time, there’s always at least one member who has this breathtaking voice, which he will either regularly melt hearts with during ballads, or on special occasions, send girls swooning during powerful high-note performances. I’m not kidding, because I know girls who LOVE those vocal powerhouses to bits. Reason? “They just look so cool and strong and manly, with their tortured expressions as their throats constrict to reach those high octaves!”

So, in Big Bang, who’s the lucky dude who can reach the highest notes? According to the other members, the answer is actually TOP! 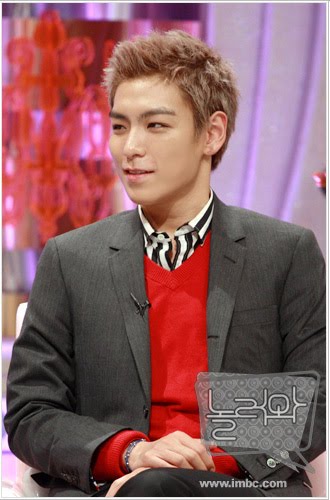 On MBC‘s Park Kyung Lim’s Star Night, where the boys were guests recently, a listener had asked Taeyang, “While TOP has a sexy low voice, how high of a note can you hit?” In response, Taeyang revealed that in Big Bang, TOP can hit the highest note and even has the SHARPEST voice as well. G-dragon elaborated by saying, “More so than being loud, I usually feel that his voice is extremely loud,” whereas Daesung hilariously likened TOP’s high notes to shouting.

TOP agreed with the other members’ confessions and admitted, “I can’t demonstrate it here but when I record I tend to rip speakers.”

When Park Kyung-lim asked for a live demonstration (careful there, the radio speakers might go haywire), TOP gave an epic answer. “I feel shy and embarrassed when I sing. There’s this pride I have as a rapper.” Oh stop, my poor fluttering heart. I would totally give my, um, eyelashes, to see a shy and embarrassed-looking TOP!

This is so mind-blowing that I literally saw stars for a moment. I mean, isn’t TOP known for his rumbly, deep, and utterly faint-worthy voice!??! Compare his voice with the Smurfs, and you’ll see what I mean.

How high can this guy’s voice go?!