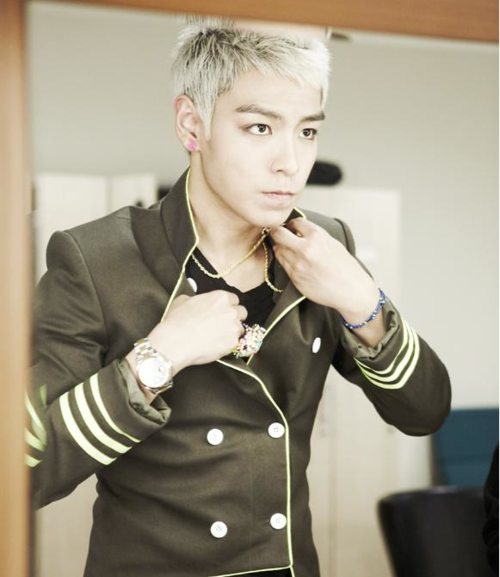 Now, I know I have a reputation for being…enamored…of a certain member of Big Bang. He is a very attractive guy, you know. And also frustratingly taciturn and unflappable, because you know that’s not his real personality but a stage persona that has grown and entrenched itself until it fit him like a glove.

But you have to admit, he is damn cool.

I wouldn’t go far as labeling him the Asian “James Dean” as some are wont to do, but one of the biggest ways to get a guy’s face plastered over bedroom walls is to present to the populace a tall, dark handsome badass who really isn’t (see, Cullen, Edward).

But screw it. T.O.P is a complete badass. Which is why this following clip is not only a little hilarious, but problematic in that turning wheel of morals kind of way.

It  quickly  dawned on me that  had this been anyone else – Taecyeon, Yunho, Heechul – I would have found the “Call me oppa!” annoying, distasteful at best. ‘Oppa’, being one of the most complex words in the Korean language with numerous meanings, entendres and definitions, depending on who you say it to, how and with what intonation, etc. (Seriously. Read Dramabeans’ comprehensive entry (http://www.dramabeans.com/2010/06/glossary-oppa/) on the topic).

It’s a personal reaction, I know; it was a bit of a relief to hear T.O.P say, “Just Kidding,” and overall, the segment was funny, light-hearted and my, does he have a strong commanding voice. Frankly, I can’t say in a similar situation I wouldn’t acquiesce.

Place me in whatever the Western equivalent of that scenario is, and John Doe would get a kick right in the crotch.

* The subbed clip got removed and this unsubbed version was the only other we found, sorry.