Big Bang Continues to have a Bangin' Week 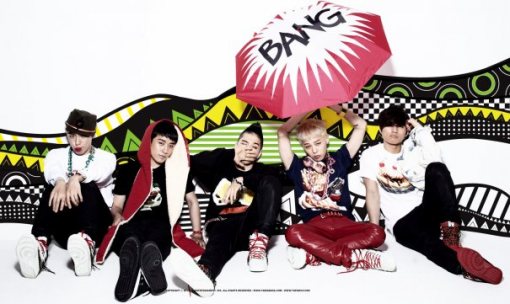 Although we don’t usually recap Inkigayo here at SB, I felt it important this week to highlight Big Bang‘s first live comeback stages and big triple crown/grand slam win, having already won the Music Bank and M!Net Countdown trophies for the week!

Interview with the MCs (Taeyang is such a nerd. And I love watching G-Dragon laugh at Seungri. We need more Dae though. In general.)

Although I understand that they are trying to promote all the songs on their mini album, I think this song, though completely unoffensive (everyone sang and performed well),  is SUCH weaksauce. Especially live. There really isn’t anything too interesting about it. And very little of that high-octane Big Bang energy I love so much. The best part of this stage? TOP doing the choreography. I love his mini-moves. Ok, and I really like the chairs they sit on during TOP’s rap (also one of the redeeming parts of this song), and how bored G-Dragon looks sitting there. HA! Only G-Dragon could look bored while performing a HUGE comeback stage.

We’ve seen the boys perform this on their other comeback specials, so nothing new here. They look a lot more comfortable performing this song and with the choreography. And everyone sounds great. Although TOP’s rap sounds just a little bored. (I know that this rap is pretty one note and low-key, but coupled with his expression, it just fell a little flat from the strong rapper.) Another thing that fell flat was the fan chant-back. You know, the “when I say ‘Somebody’, you say ‘To love’,” part. C’mon fangirls, where you at? I expected that to reach decibel levels of NASA rockets/spaceships lifting off.

And lastly, “Tonight”. Seungri taught everyone the dance, so I hope everyone in the audience was doing it! Can I just start off by saying how much I LOVED that stage?!! THIS is why I love Inkigayo. It was also nice to see the boys perform this choreography live for the first time. I really REALLY liked the robot/pop ‘n lock/isolations at the beginning of the song- now THIS is TOP’s type of dancing! Lots of energy for this song, fan screams were out of control, but something was still missing for me. I think it’s the crowd interaction. Since Inkigayo’s stage is pretty much just a huge stage in front of the audience, there is little interaction with the fans, and I think Big Bang feeds off that energy so without it, it feels like they just aren’t giving it their all. But, maybe that’s just me? I like it when they are running around on stage and high-fiveing fans and just letting loose….

…kinda like their performance after their big WIN! (TOP is too cute in the background doing his best “Rocky” victory move during the acceptance, btw. Also, AWKward TOP-Seungri interactions…c’mon boys, play nice.)

I like the boys best when they aren’t worried about the performance and choreography, but just get out there and perform. That is when they are in their element. Their vocals sound stronger, their raps are fiercer, and I think the crowd just gets more into it. At least I do.

Congrats to Big Bang on a BIG comeback week. Even with all their dramz and all. Can they stay at the top for another week? We shall see!