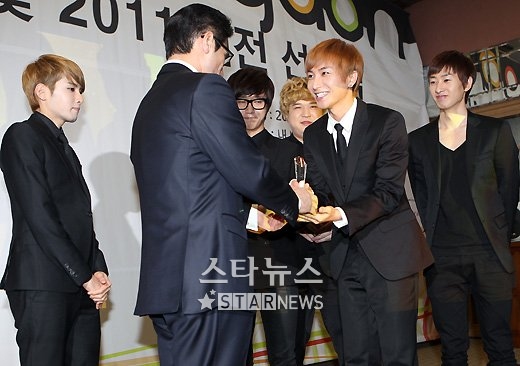 Super Junior was awarded the prize for the  top selling album in 2010 at an awards ceremony on the 9th in Seoul.  According to the Gaon Charts, Super Junior’s Bonamana took the top prize by selling over 200,000 physical units.  Five  SuJu members Ryeowook, Yesung, Leeteuk, Shindong, and Eunhyuk were on hand to receive the award for their accomplishment.

SM Entertainment ruled the charts with strong sales from Super Junior and SNSD leading the way for them. JYP Entertainment also had a strong showing, especially in digital sales with miss A, and 2AM having a breakout year in 2010. YG Entertainment lagged behind the other two Kpop entertainment powerhouses in 2010 in terms of sales, but I think that 2011 will be a different story with the return of Big Bang to the Kpop scene later this month.