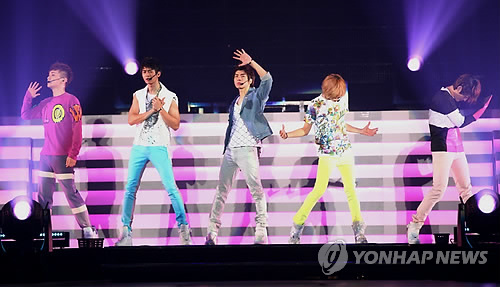 SHINee held their first full-length concert in Japan’s Yoyogi Stadium last December, which was meant to break ground in SHINee’s upcoming debut in Japan. Now, with their official debut set for March, the boys are gaining greater recognition by Japanese press. One network has compiled the video below, which showcases some interview segments by the members as well as some concert footage and background information about the group. Check it out below:

(Side note: I’ve seen a bunch of professionally recorded footage of SHINee performing “The SHINee World” during their Japanese concert, and I’m 98% sure that they’re lipsynching the song. Isn’t that supposed to be, like, a cardinal sin in Japan? Just saying.)

SHINee will follow SNSD as the next SM artist to make an official Japanese debut through EMI Japan, and I’m guessing that they’ll be following in the footsteps of their sunbaes by debuting with a Japanese version of one of their previous Korean promotional singles. The obvious choice would be “Lucifer,” but I have a feeling that it’s going to be something weird like “Love Like Oxygen” or “Ring Ding Dong.” What do you think, folks?