Changmin wears shoe lifts; there is no hope for the human race 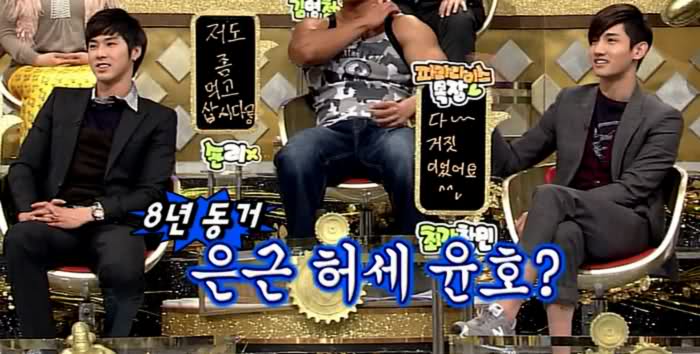 The members of DBSK have been making their rounds around the variety show arena, as a part of their promotions for their latest album, Keep Your Head Down. The duo’s latest appearance on SBS’ Strong Heart raked in a 4.9% ratings leap for the variety show – a much-needed boost from last week’s low 9.8% nationwide viewership. Behold, the power of the Gods strikes again. *shot*

On the show, the topic of member height and shoe lifts in DBSK arose. With Changmin weighing in at 185 centimeters and Yunho at 183 centimeters, the height difference between the two members is rather minute. However, Yunho nonetheless expressed his insecurities about standing next to the “tallest Chang-god” during performances.

“To be honest, Changmin is too tall and he’s also too good looking, so I feel very burdened. So I wear cushion insoles whenever I stand next to him,” admitted Yunho.

MC Kang Ho-dong expressed his shock as he mused, “I never would’ve thought that Yunho used sponges.” Slightly irritated by the teasing, Yunho blurted out, “Changmin wears them occasionally as well!”

For us metric-stupid Americans out there, 185 centimeters is about 6’1″ – which, for a continent where someone of Yao Ming’s height is considered a genetic anomaly, is pretty tall. I can understand Yunho’s case for wearing shoe lifts – a two centimeter height difference might not be much, but it can nonetheless look awkward when you’ve got two people of unequal heights standing next to each other. But Changmin? Way to make the rest of us look bad, dude.